There used to be a lot of classic tiki bars and Polynesian Pop restaurants in Hawaii, but as tourists started to seek out a more ‘authentic’ Hawaiian experience in the 1980s and 90s they fell out of favor and most of them closed. In Waikiki during the mid-century tiki heyday there was a Don the Beachcomber, the Sheraton’s Kon Tiki, a Christian’s Hut, and a Trader Vic’s, as well as a Trader Vic’s in Honolulu. Nowadays the only originals left are the Tahiti Nui in Kauai and the La Mariana Sailing Club in Honolulu. However, tiki is big again and there are some new tiki bars, most notably a resurrected Don The Beachcomber in Kailua-Kona that opened in 2005 (no connection to the original Don the Beachcomber chain). 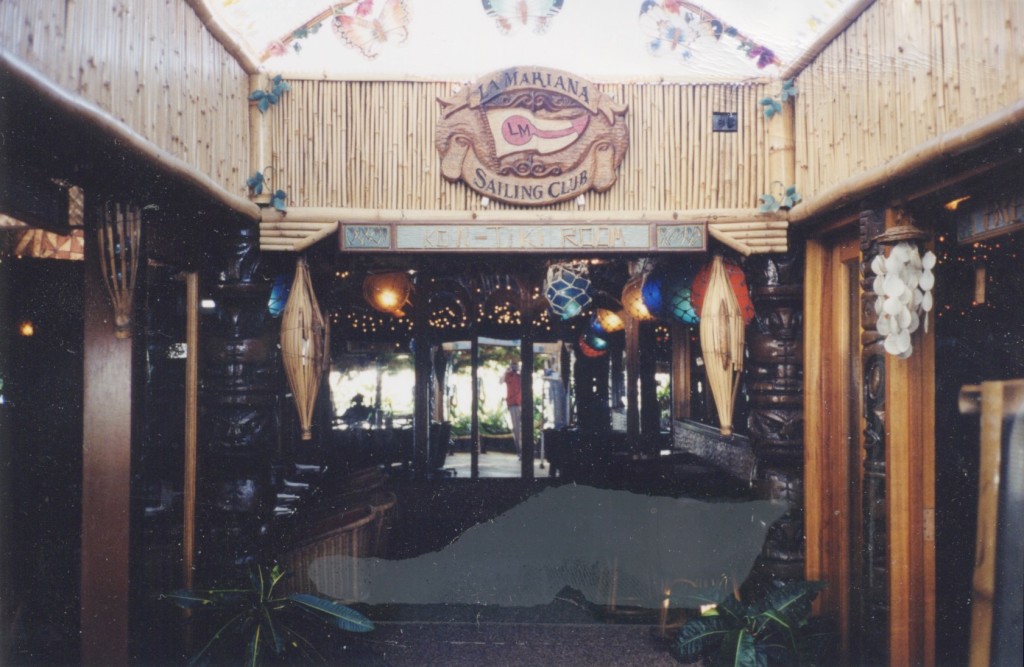 entrance to Kon Tiki Room – photo by Dean Curtis, 2001 (photo was damaged by being stored with some Polaroids)

Annette La Mariana (Italian for “little sea”) was born in Brooklyn in 1914 and married a silent film star when she was 18 years old. The marriage ended and she later married a New Zealander, Johnny Campbell, and sailed throughout the Pacific with him, ending up in Honolulu, where they decided to create an inexpensive sailing club and marina. They started work in 1955 and in 1957 the La Mariana Sailing Club opened. The membership fee was $2 and slips rented for 50 cents a month. After spending 20 years building a lush tropical oasis on the site, in 1975 she had to vacate so she moved the entire operation 50 feet up the shore of Keehi Lagoon into an old junkyard, including the docks, boats, the clubhouse, and many trees and plants. The marina is still working as a private sailing club, but the restaurant and bar are open to the public. 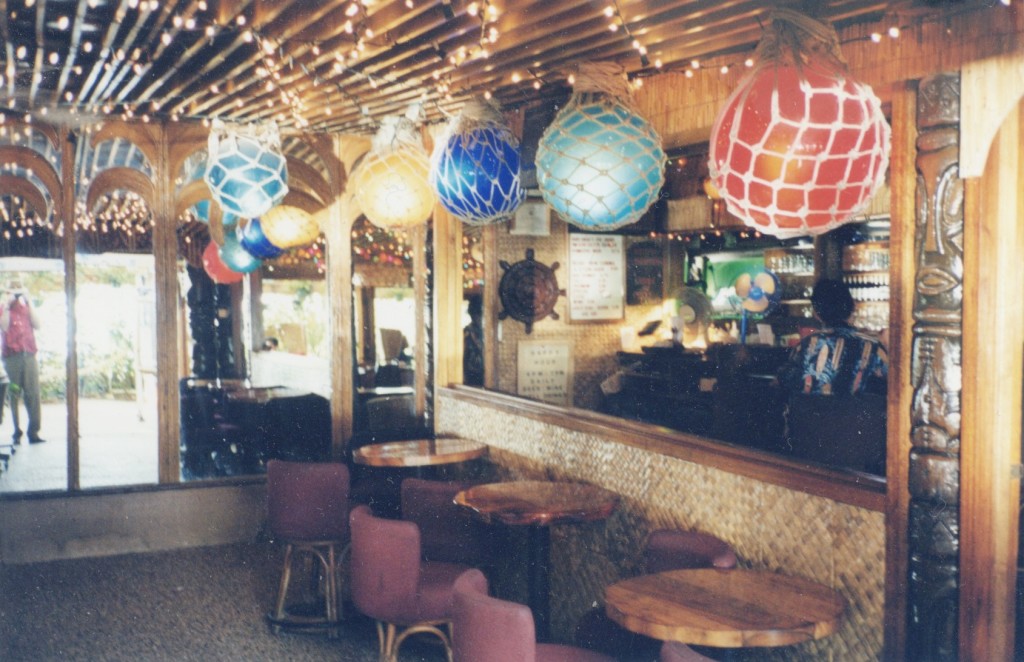 Annette La Mariana Nahinu continued to improve the restaurant, adding decor from local tiki bars that closed in the 1980s and 1990s, including koa wood tables and rattan furniture from Don the Beachcomber, tikis from the Kon Tiki and Tahitian Lanai, and glass floats and puffer fish lamps from Trader Vic’s, making the La Mariana a delightful living museum of the long gone tiki establishments of old Waikiki. And there’s even a waterfall inside! 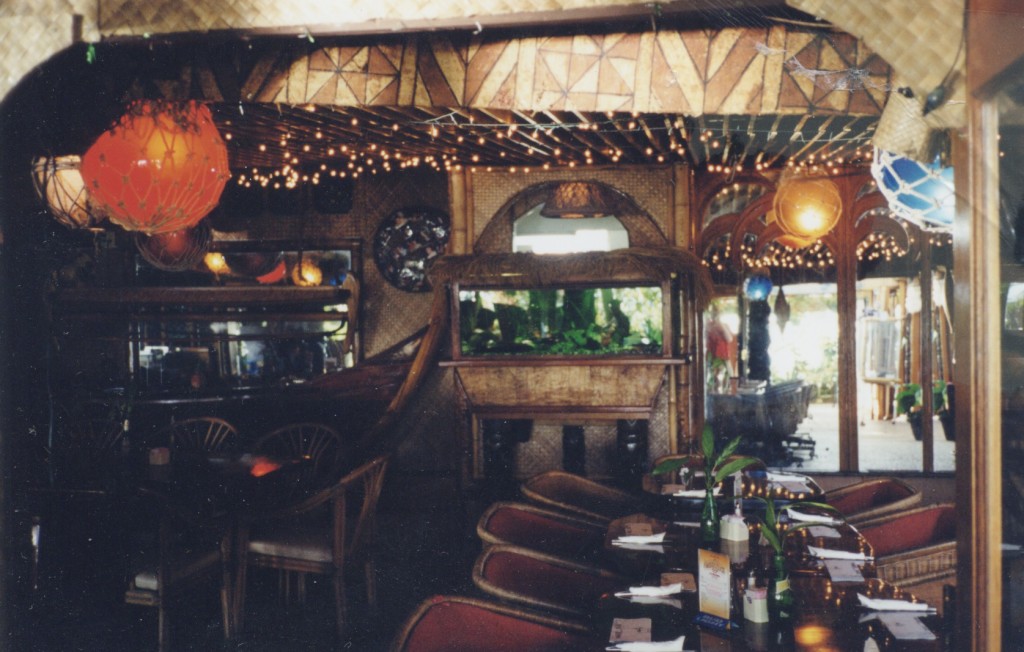 When my girlfriend and I dined at La Mariana in 2001 we enjoyed meeting Annette, who was 87 years old and still visited all of her customers at their tables. She continued to run the restaurant until just before her death in 2008 at 93. 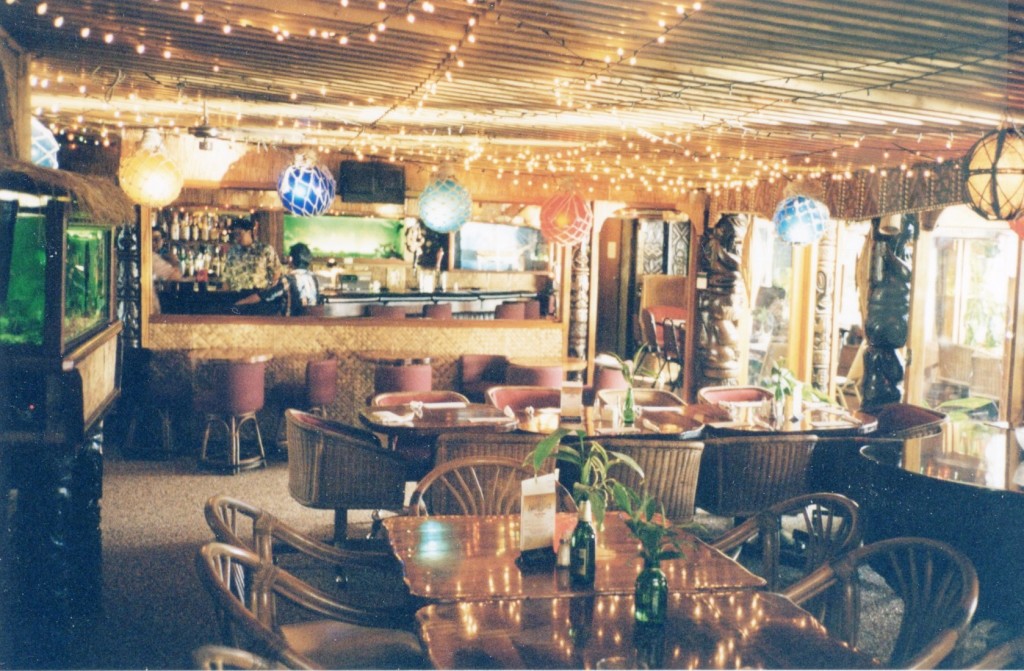 looking back towards the bar from inside the dining room – photo by Dean Curtis, 2001

The menu is traditional surf and turf with meany seafood entrees, a few steak and chicken dishes, and a large choice of pupus. Lunch and dinner are served daily with pupus also served between meals. The tropical drinks are sweet and strong. Not up to par with the cocktails at the Mai-Kai or Tiki Ti, but they are fairly inexpensive. 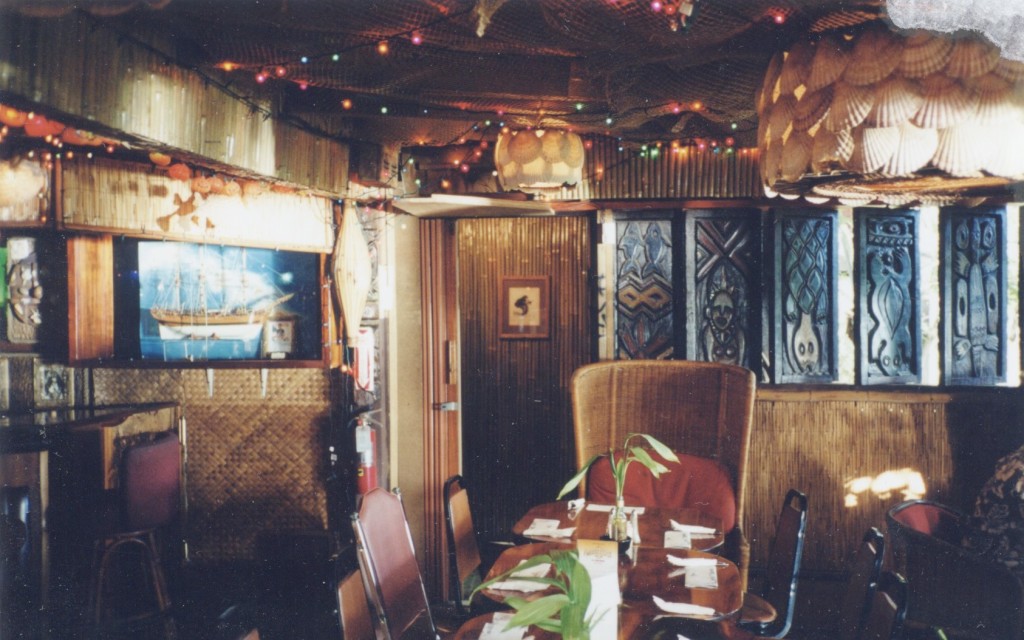 It is suggested that you try to visit the bar on a Thursday night, when blind piano player Ronnie Miyashiro is on the keys starting at 7:00pm. He is legendary, having once played at the Tahitian Lanai, so he attracts an older crowd of regulars who often sing along to the Hawaiian songs and pop standards. This is not karaoke; the folks who step up to sing can carry a tune and sometimes local musicians sit in as well. But show up early because this is not a late night bar. 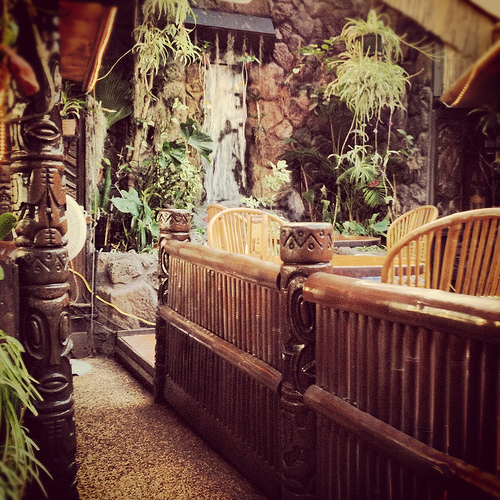 The La Mariana is the best place in Oahu to still experience Hawaii as it was during the 1950s through the 1970s. ALOHA!

The restaurant is a bit hard to find on route 64 toward Sand Island from Honolulu Airport (convenient for before a flight or on a layover). Somehow we managed to find it in 2001 without smart phones or GPS!