UPDATE: Fishermen’s Grotto was purchased in 2016 and closed for remodeling. As of June 2017 it remains closed.

One of my favorite web sites during the pre-commercialization heyday of the World Wide Web was the Los Angeles Time Machines site (latimemachines.com). It started in 2004 but it had the look of a 90s web site, basic but chock full of great information. Sadly, in late 2011 the author took the web site down for health reasons and it has never come back. There are a few remnants from the site, namely some outdated Google Maps made from the locations that were listed on the site. This map has hours (which may not be correct anymore) addresses, and year opened, while this map just has short descriptions of the sites. For Mad Men fans, here is a Google Map by the latimemachines.com site showing classic restaurants that were used as filming locations in the early seasons of the TV show. Why I bring up L.A. Time Machines is because the site had a list of Top Ten Overall Time Machine Restaurants in the Los Angeles area. 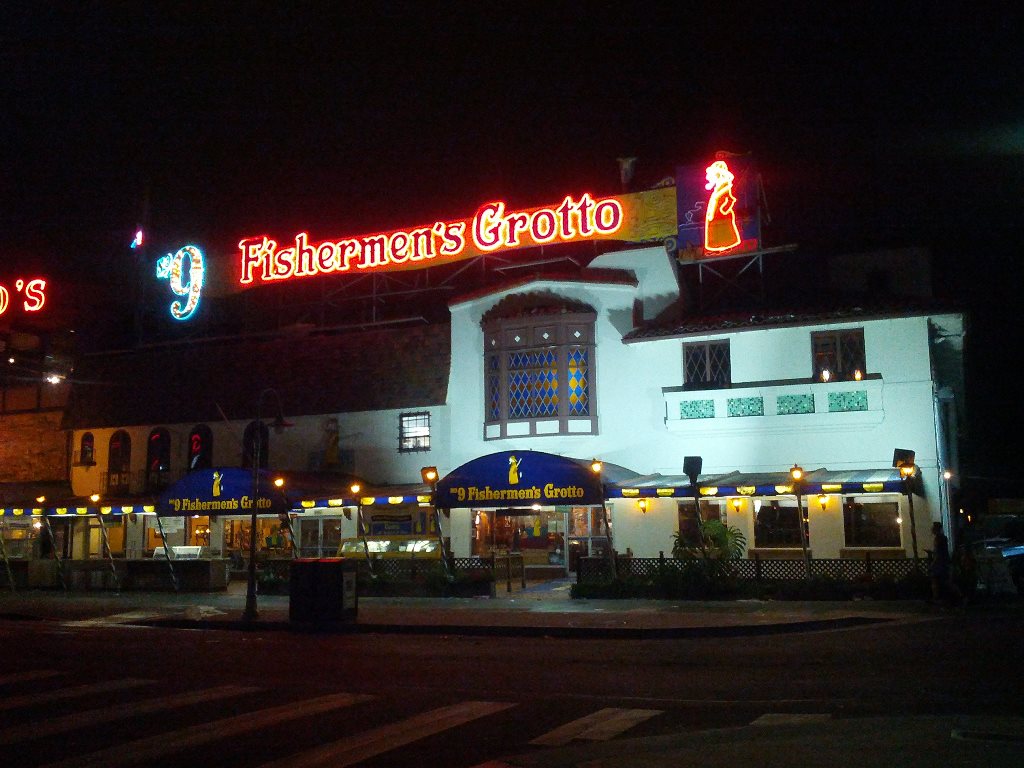 In the Bay Area, Le Continental’s award for best all around time machine experience goes to No. 9 Fishermen’s Grotto! 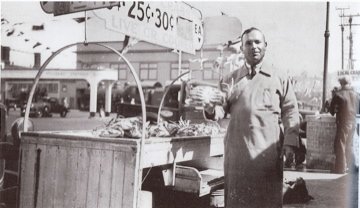 In 1931 Mike Geraldi, a fisherman from Sicily, started selling the fish he caught at a stand  at No. 9 Fisherman’s Wharf. In 1935 he opened Fishermen’s Grotto, a full service seafood restaurant on the site. 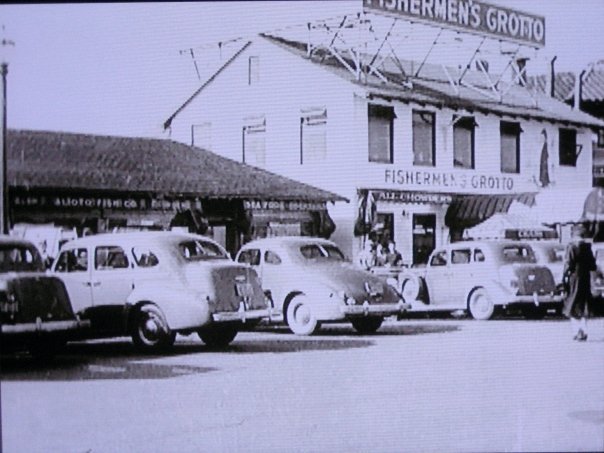 Although the Fisherman’s Wharf neighborhood and tourist attraction in San Francisco extends from Pier 39 to Ghirardelli Square, the original wharf where Fisherman’s Grotto is located was created in 1906 from the remains of Meiggs’ Wharf enlarged with rubble from the great San Francisco earthquake. It still acts as a working wharf with many fishing boats operated by the third generation of long-time Italian fishing families. In the early days of the wharf these fisherman would set up stands offering their days catch. Some had large pots to cook Dungeness crab to be sold as crab cocktails in paper cups. Later many stands evolved into restaurants, including Castagnola’s (the stand opened in 1916, but the restaurant opened later), Alioto’s (1925, the restaurant in 1938), Sabella / La Torre (1927, the restaurant starting in the late 1940s), Pompei’s Grotto (1946), The Franciscan (1957), and Scoma’s (1965). Most of the above restaurants have been expanded, remodeled, and updated. The only ones that retain a classic feel are Pompei’s Grotto, Scoma’s (though gradually it is being updated), and Fishermen’s Grotto, which is the oldest and the best-preserved restaurant on the Wharf. 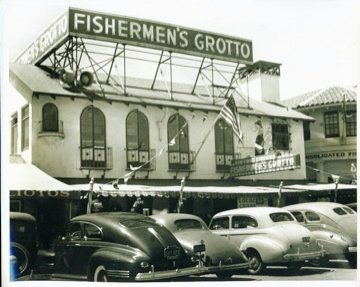 Look at the front of the building in the historic photos above and you can see that the Fisherman character was there from the start. It’s still used throughout the restaurant and on many of their souvenir items available in the gift shop. Yes, there’s a gift shop. And they regularly put out vintage items from their old stock that are for sale! 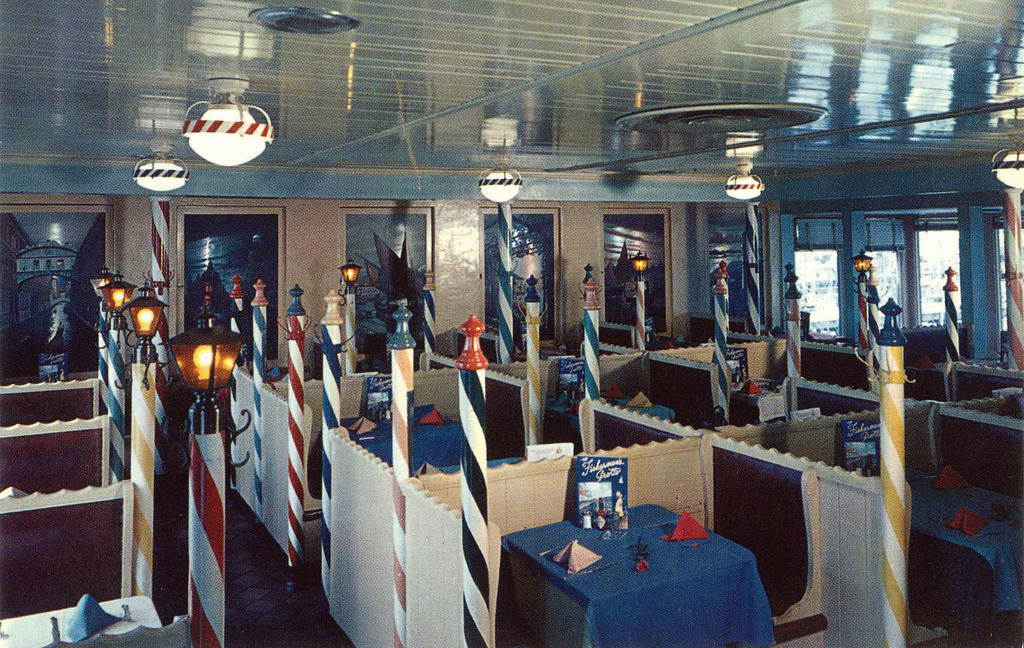 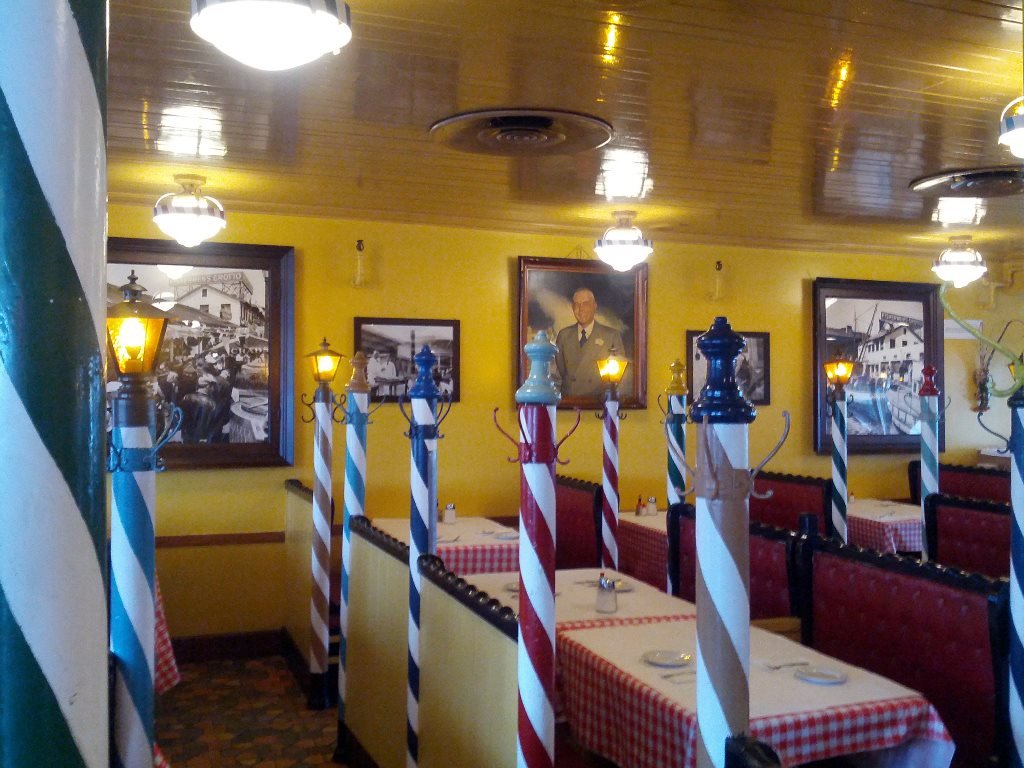 The original building’s dining room is called the Venetian Dining Room, which is festively painted in gold and has padded wooden booths with striped poles like those on Venetian gondolas. Some even have lamps at the top, and all have hat/coat hooks. This is one of my favorite historic dining rooms anywhere and it’s kept in perfect shape! Make sure you look at all the historic photos lining the walls, as well as at the views outside to the harbor. Originally there were Venetian dining rooms on both the first and second floors, but now the remaining one is on the ground floor. 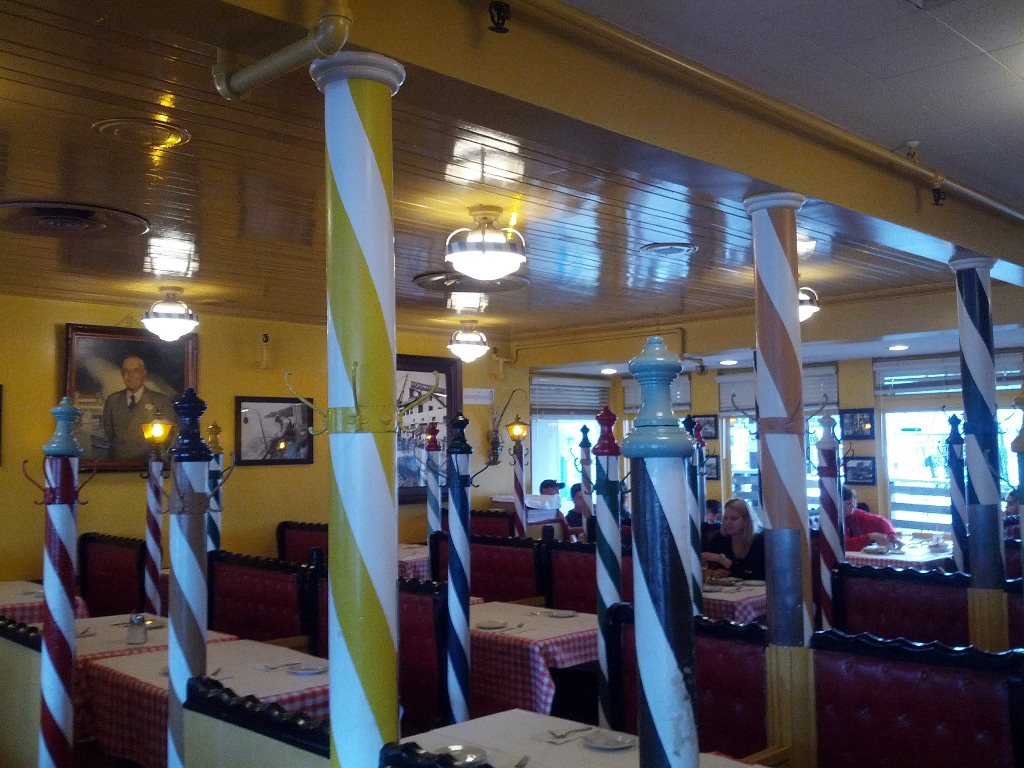 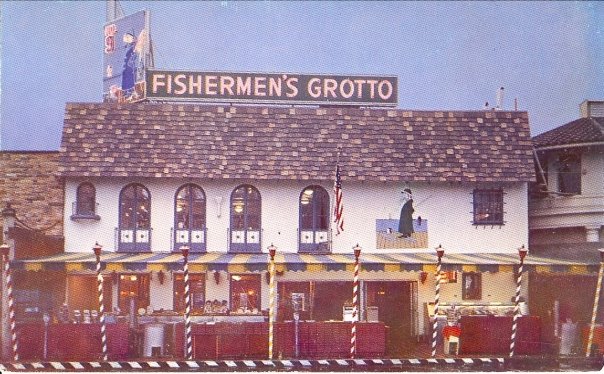 In 1953 Fishermen’s Grotto expanded on the north end of the building, purchasing and incorporating the Vista Del Mar restaurant next door, which opened in 1951. The swanky Fireplace Cocktail Lounge and beautiful Florentine Dining Room opened upstairs, commanding sweeping views of the harbor. 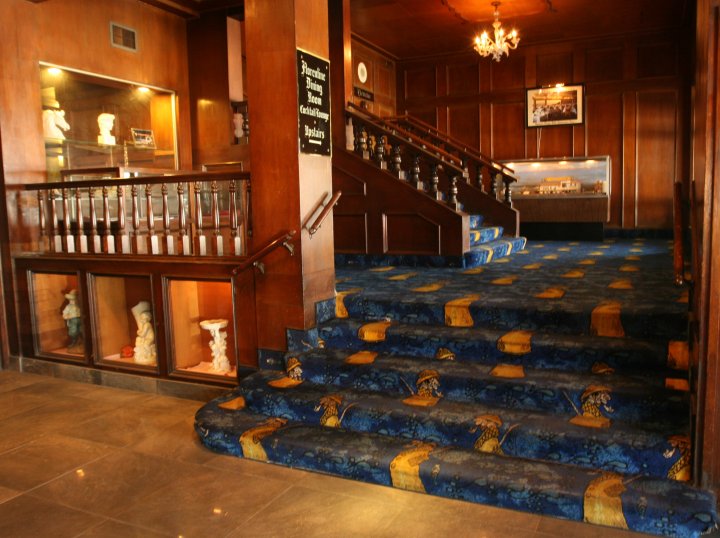 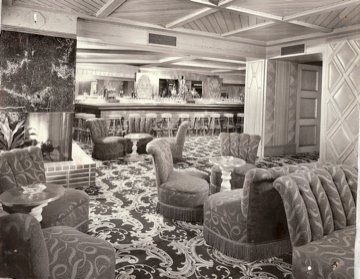 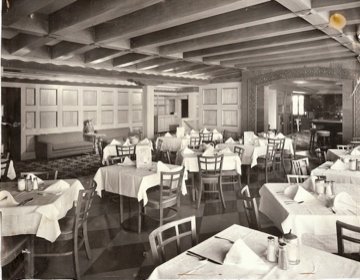 Also added around this time (on the first floor) were the gift shop and the Grotto Tavern, a cozy small bar with the Fisherman etched in the glass doors, wonderful tufted red vinyl high-backed bar stools, blonde wood ceiling and walls, and a large mural of an Venetian scene. 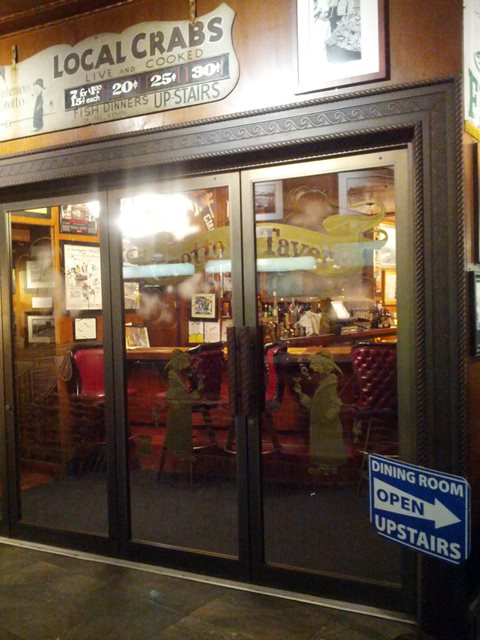 Grotto Tavern entrance – note the old sign from the crab stand with such low prices! – photo by Dean Curtis, 2015 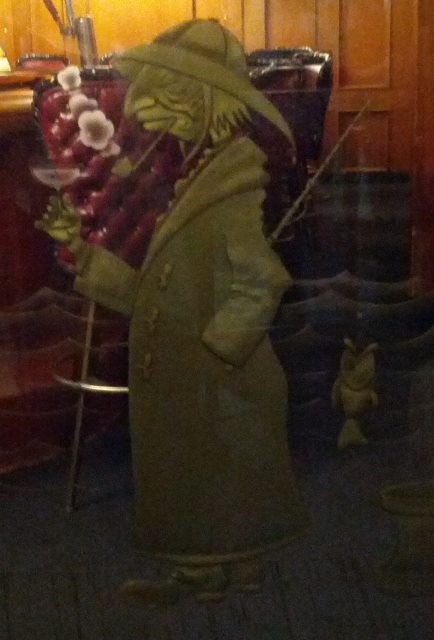 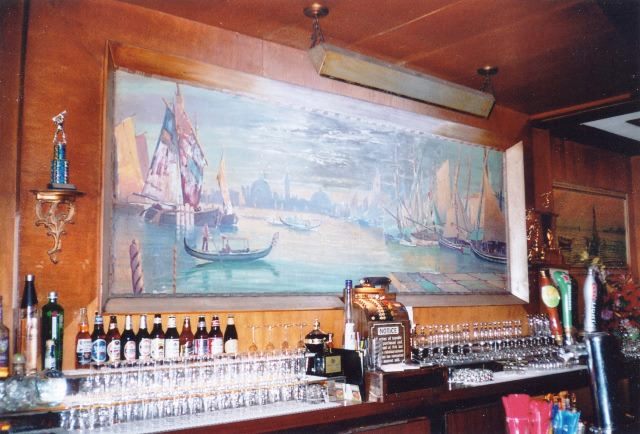 Grotto Tavern, 2005 – cash register has since been replaced by computer terminal – photo by Dean Curtis 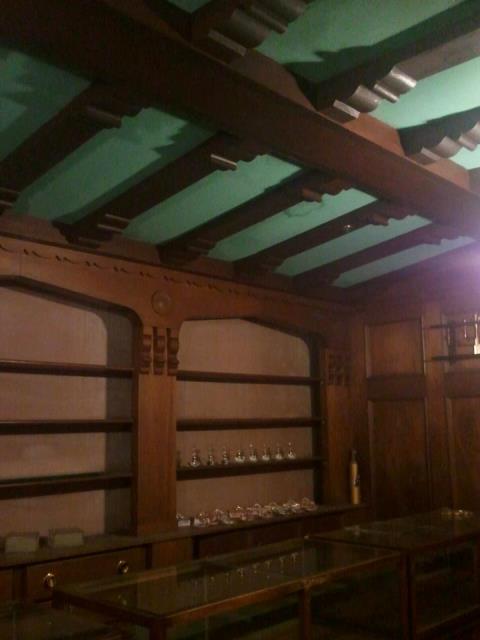 Gift Shop – I took this photo of part of the gift shop in 2012 when they were renovating it. Thankfully the gift shop is still as beautiful as ever. – photo by Dean Curtis, 2012

In the 1960s the Fireplace Lounge and Florentine Dining Room were remodeled a bit. The lounge received new blue vinyl chairs, blue tufted-vinyl, high-backed bar stools and new carpet in the fisherman motif, but the rest of the lounge remained the same, including the honey-stained wood walls with diamond-shaped panels, the stained glass windows, also in a diamond pattern, the coffered wood ceiling, the light sconces, the curving wood bar, and the back bar with decorative carved wood treatments and a statue of Poseidon with (perhaps) Amphitrite, one of his many mates. This is the way it looks today. Absolutely stunning. Unfortunately, a TV was added sometime around the early 2000s (I don’t recall its presence when I first visited the bar in the late 1990s). But the fish tank is still there to distract you from the TV, and the fireplace is as well. The last time I visited on a recent weekday summer night the fireplace was lit, though it may not be every night through the year. On my recent visit we were told that the Fireplace Lounge is staffed only on Friday and Saturday nights, though we were served a drink in the bar after we asked nicely.

My phone photos are very dark since I didn’t want to use a flash, so they can’t do justice to the beauty of the room. But hopefully they can give you some idea. Compare them with the B&W photo above of the Fireplace Lounge in the 1950s to see how little has changed. 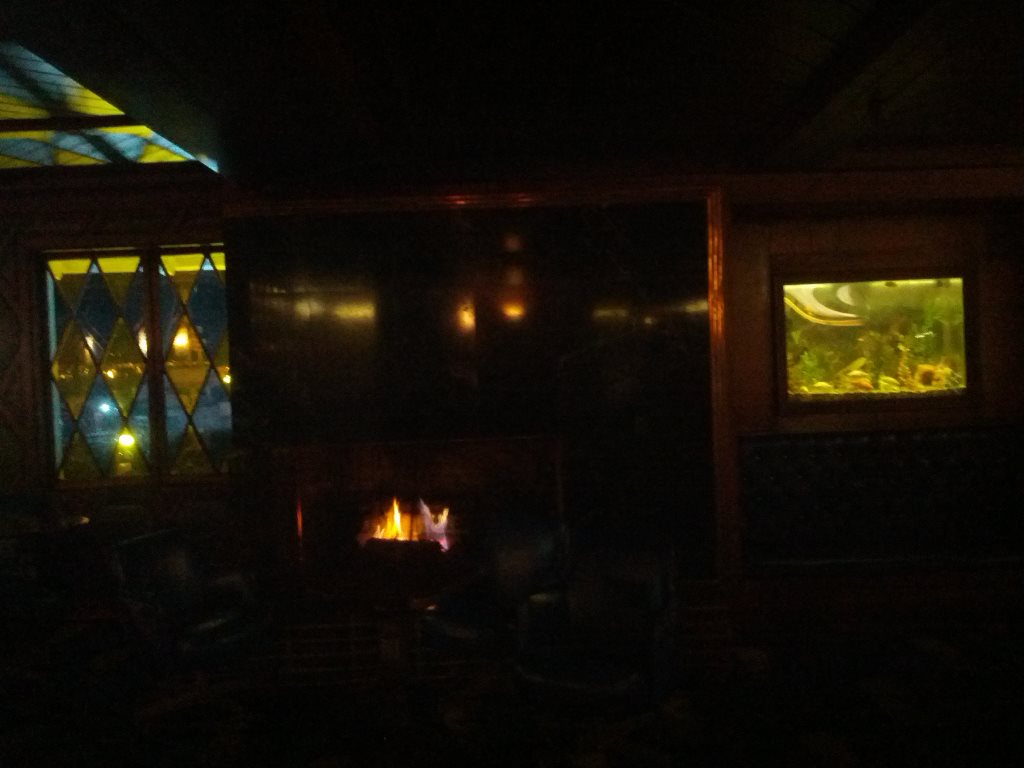 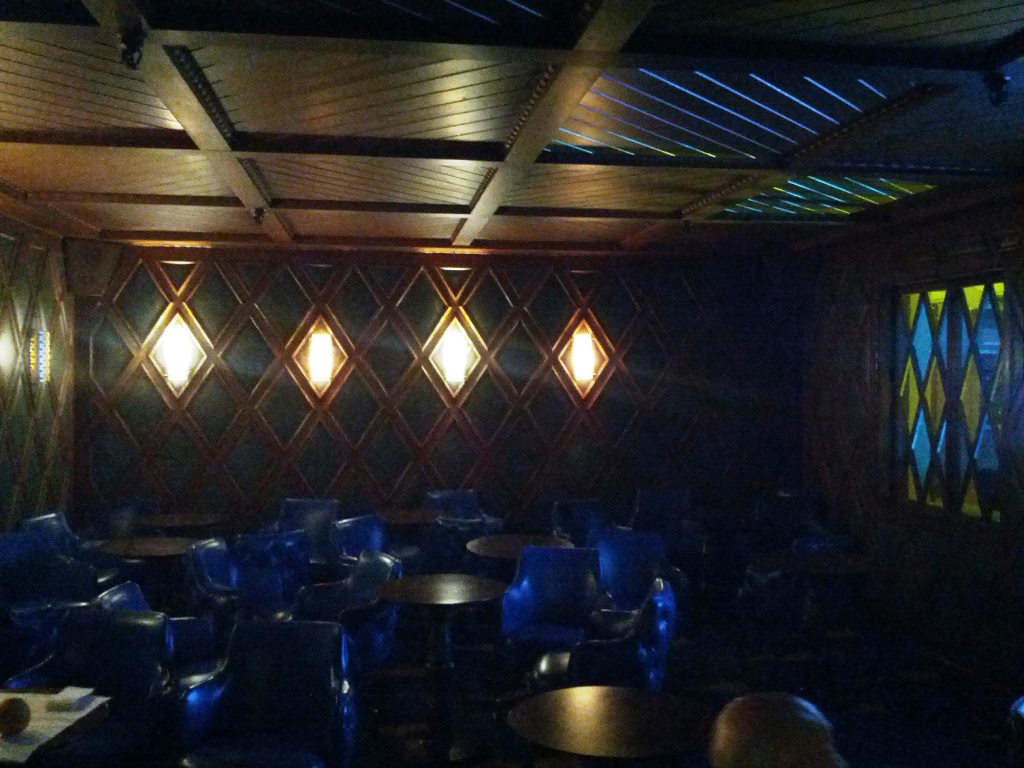 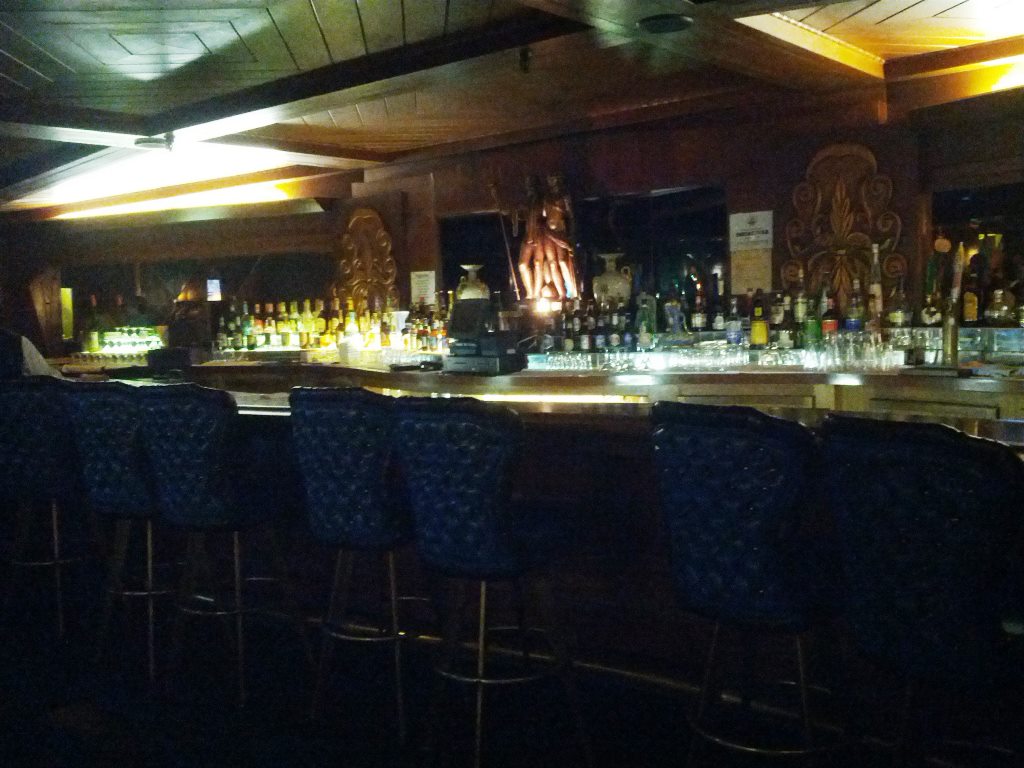 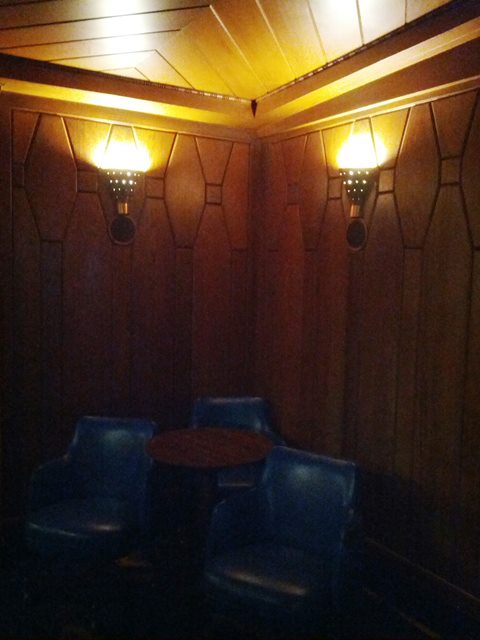 The Florentine Dining Room also has not changed much since 1953, with the exception of new carpet, chairs (which don’t look much different from the original ones), and chandeliers which look like they were added in the 1960s. The gorgeous open beamed ceiling and wavy wood treatments back-lit by recessed lighting are still there in all their glory, as well as picture windows galore, with views of boats in the harbor in the foreground and the city and the Golden Gate bridge in the background. 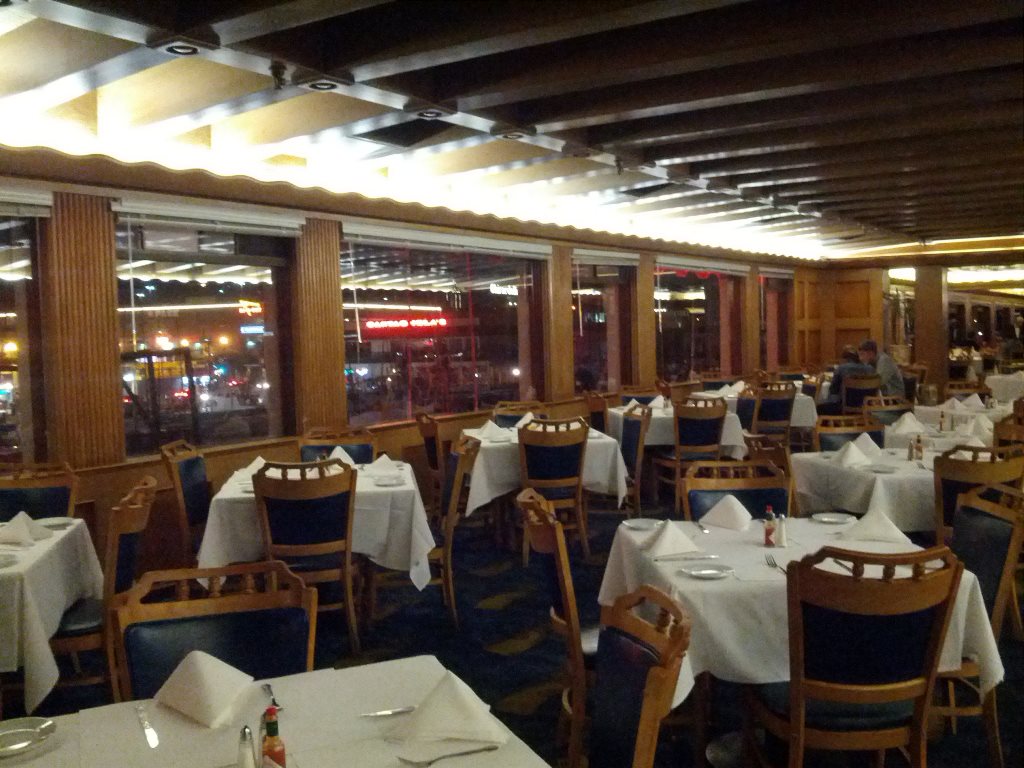 The dining room is huge, so it can accommodate the summertime tourist crowds (it seats 265 diners). As you make your way into the dining room there is another bar (three in one restaurant!) that is a real novelty in San Francisco. The back bar is sunken below floor level so the patrons can drink and dine while seated in lounge chairs instead of bar stools. A brilliant bar concept! The only other sunken bar I recall is the one that was in an old Italian restaurant in Hayward, CA, called Banchero’s, which closed in 2012. I really miss that place! 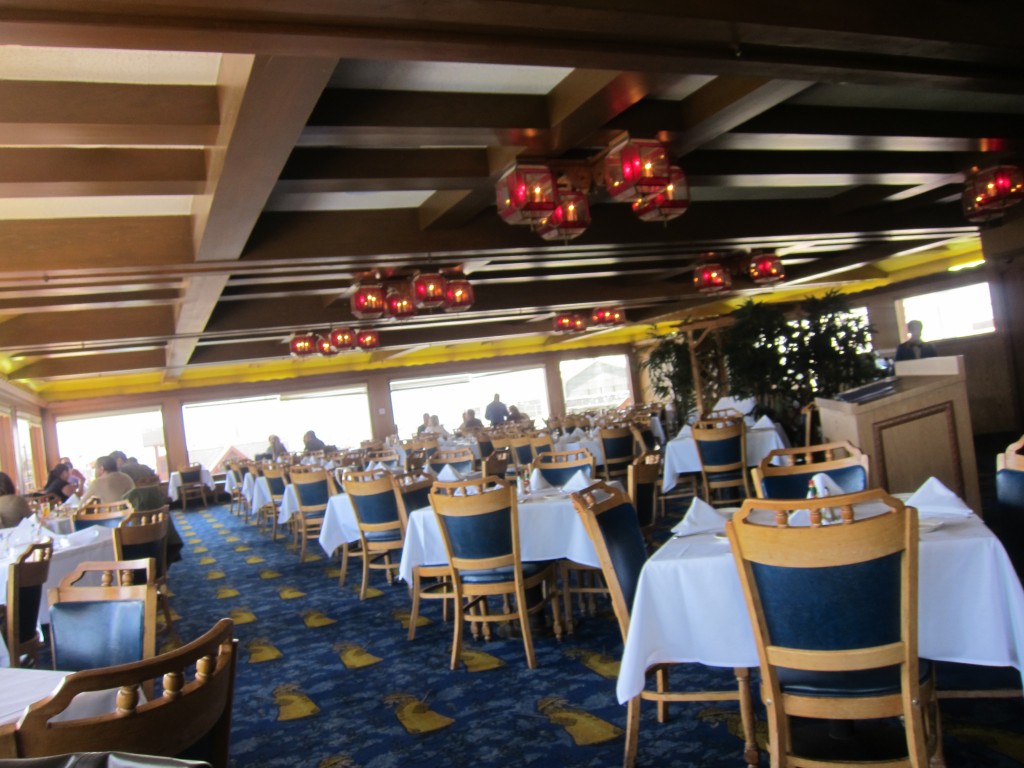 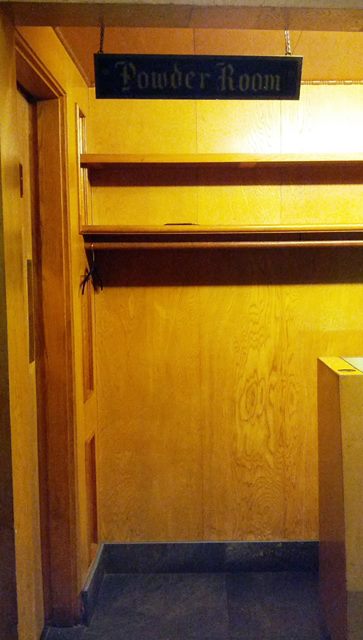 Near the host stand and the ladies’ powder room (yes, it’s still called that in this time machine) there is a table with some souvenir pamphlets you can take home, and a display case of other souvenirs available in the gift shop downstairs (ask when it closes so you don’t miss the gift shop). And check out all the memorabilia on the walls downstairs, inside and outside). 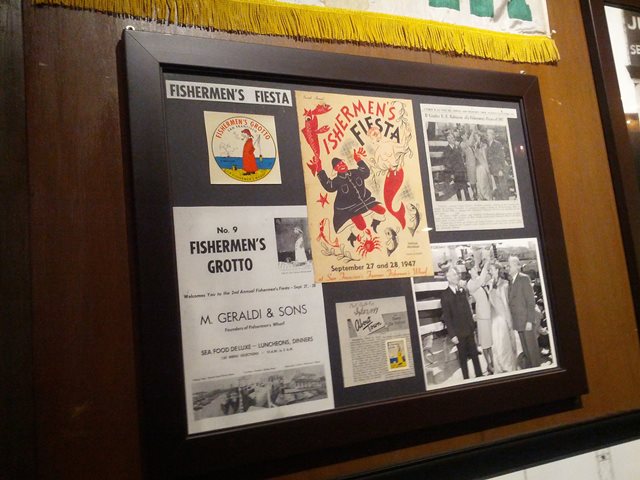 The menu is seafood, of course. Their Boston clam chowder recently won a local award. I recommend any of the Dungeness crab dishes, such as the crabcake, crab Louie (my favorite), and the whole or half crab roasted in olive oil, garlic, and lemon. Local Dungeness crab season runs from November until the summertime, but the season normally continues in Oregon and Washington until mid October, so it’s fine to order it here year ’round. Dungeness crab is currently a sustainable seafood resource. There are also pasta and meat dishes on the menu. My friend recently tried the filet mignon and it was excellent. I would not recommended the dishes with bay shrimp, which are usually frozen in most restaurants, or the seafood dishes with heavy sauces that tend to overpower delicate fish. As in most seafood restaurants order with care so you get the freshest local seafood possible. It’s easy to ask the server “what was locally caught today?” 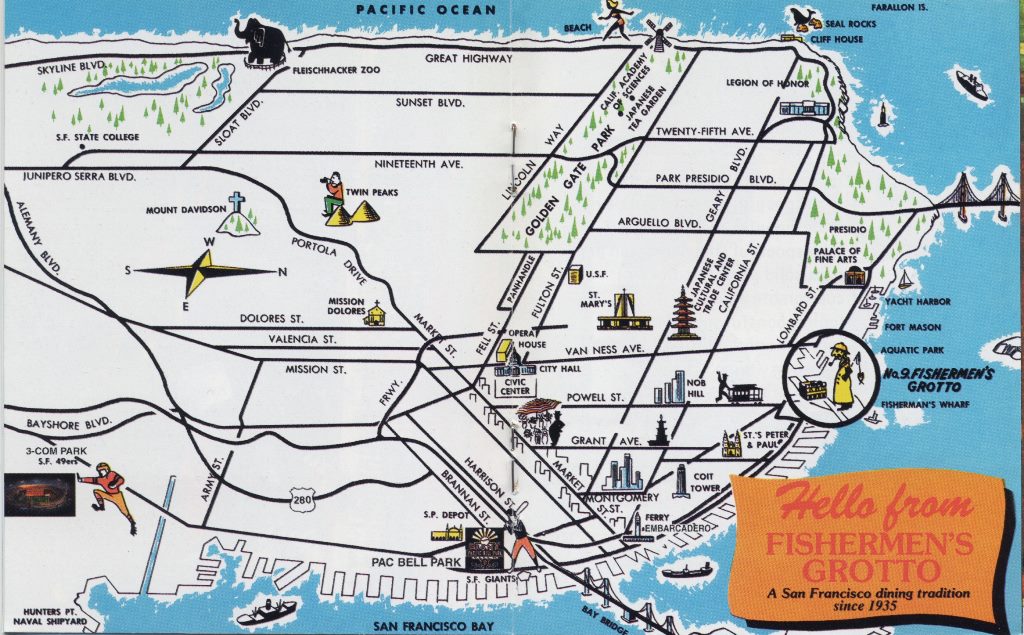 Fisherman’s Grotto is still owned by the Geraldi family, after 80 years! Take that, Bubba Gump! Forget the national chain restaurants in Fisherman’s Wharf. Instead take your business to a locally owned, family restaurant like Fishermen’s Grotto, Scoma’s, Alioto’s, or Pompeii’s Grotto. When I moved to the Bay Area in 1992 many locals told me to avoid Fishermans’ Wharf. It’s full of tourist traps, they said. I went anyway, and discovered Fishermen’s Grotto. So, sometimes it’s better to ignore locals’ advice and check it out for yourself! 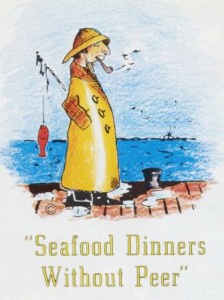 I was surprised to see such low scores on Yelp for Fishermen’s Grotto. I always take Yelp with a pillar of salt, but it seems that people either ‘get’ classic restaurants or don’t. One of Le Continental’s rules on classic dining is to lower your expectations a little. Go to this incredible time machine with the goal of dining as they would have in the 1950s: have a martini at the Fireplace Lounge or sunken bar, dine on some crab and spaghetti, soak in the views listening to some Sinatra or Dino that plays softly in the background, and be thankful that you still can have such an experience. Then go have an Irish Coffee at the Buena Vista Cafe.