Recently I heard some sad news that the Portland outpost of Trader Vic’s closed after a fire. The Portland location was the best of the “new” Trader Vic’s in the U.S. which opened in the new millennium. I know it was because I went to all the new locations, with the exception of the Las Vegas one (mainly because the consensus in the tiki community was that the Vegas one was poorly designed – too sleek and not like a classic Trader Vic’s). The closure leaves only two Trader Vic’s open in the country, in Atlanta (covered by Le Continental) and in Emeryville, across the bay from San Francisco. 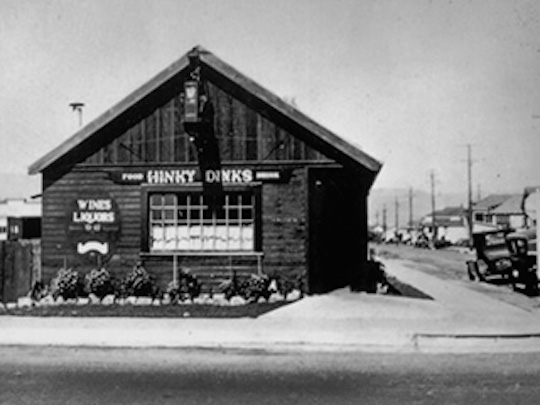 In 1934 San Francisco-born Victor Jules Bergeron, Jr. borrowed $500 from his aunt and opened a tavern in Oakland at San Pablo Ave. & 65th St. called Hinky Dinks. He acted as bartender and cook, serving mainly beer and sandwiches. But in 1938, after traveling to the Caribbean, New Orleans, and Hollywood, where he visited Don the Beachcomber (opened 1933), he decided to convert a portion of his modest bar into a cocktail lounge solely “for ladies and their escorts” called the Bamboo Room, where he served mixed drinks “from all around the world” such as the Mojito, “Cuban Presidente”, “Barbados Red Rum Swizzle”, “Maui Fizz”, Raffles Bar Sling, and the Pisco Punch [source: Oakland Tribune July 28, 1938 via tikiroom.com]. He also renamed his bar and restaurant Trader Vic’s around this time. 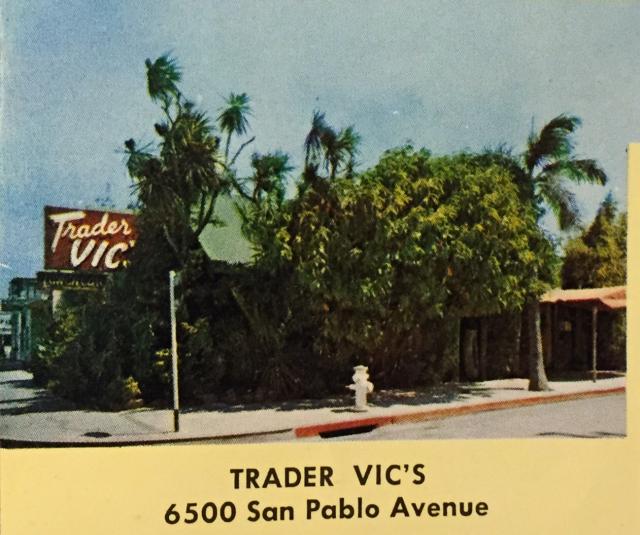 Word spread about the bon vivant host with a wooden leg (he lost his leg as a child from tuberculosis) who was serving Chinese food (he learned to make by visiting Chinatown in SF) and fancy cocktails in Oakland. The new Oakland Bay Bridge and the Golden Gate International Exposition in 1939-40 helped business. Herb Caen wrote in 1941: “the best restaurant in San Francisco is in Oakland”. 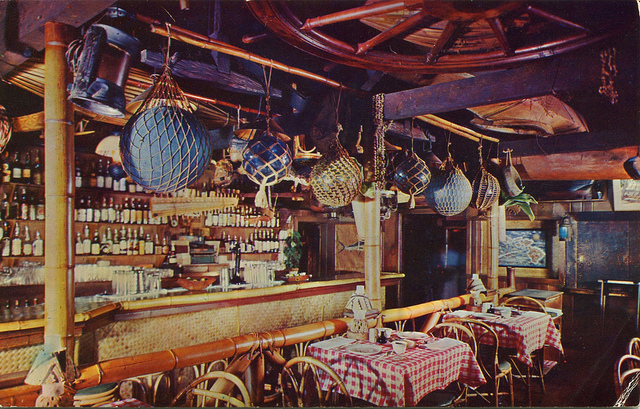 In 1944 Victor Bergeron invented the Mai-Tai at Trader Vic’s in Oakland, where he also developed the full-blown Polynesian restaurant concept with tikis, nautical decor, flotsam from around the world, and of course bamboo. In 1948 he opened his second restaurant, The Outrigger in Seattle (changed to Trader Vic’s in 1960) and in 1951 he opened his San Francisco restaurant. 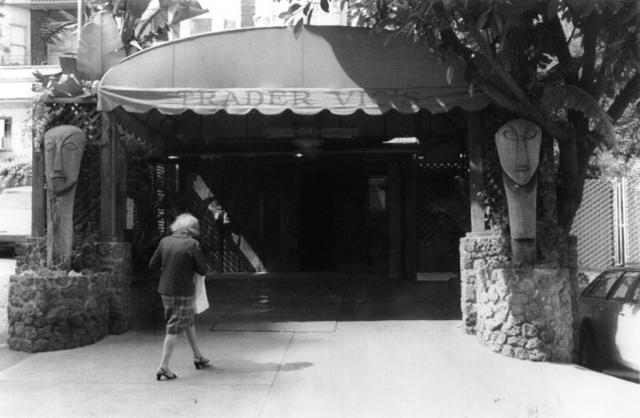 The San Francisco location became very popular, frequented by celebrities, politicians, and royalty (Queen Elizabeth visited in 1983) until it closed in 1993. Today the French-Vietnamese restaurant Le Colonial occupies the building but you can see Trader Vic Alley as a tribute to what was once there. 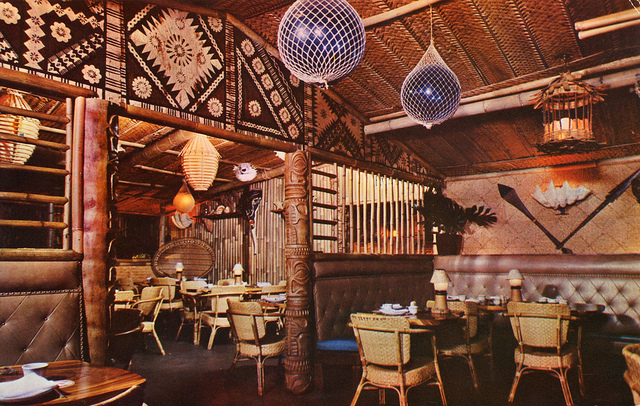 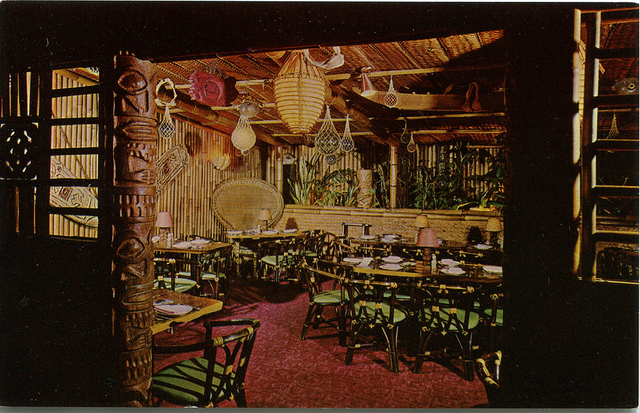 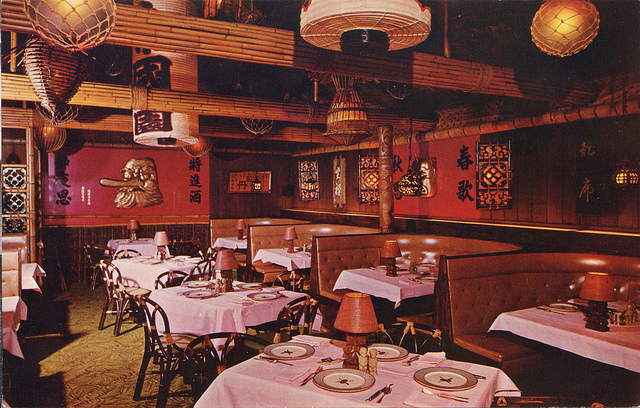 The Trader Vic’s restaurant chain grew worldwide through the post-war years’ massive popularity of exotic escapism via tropical drinks, Polynesian food, Hawaiian and South Pacific culture, and exotica music. In the waning years of the heyday of Polynesian Pop a new Trader Vic’s opened in the Bay Area, in Emeryville, and the Oakland location closed in 1972. 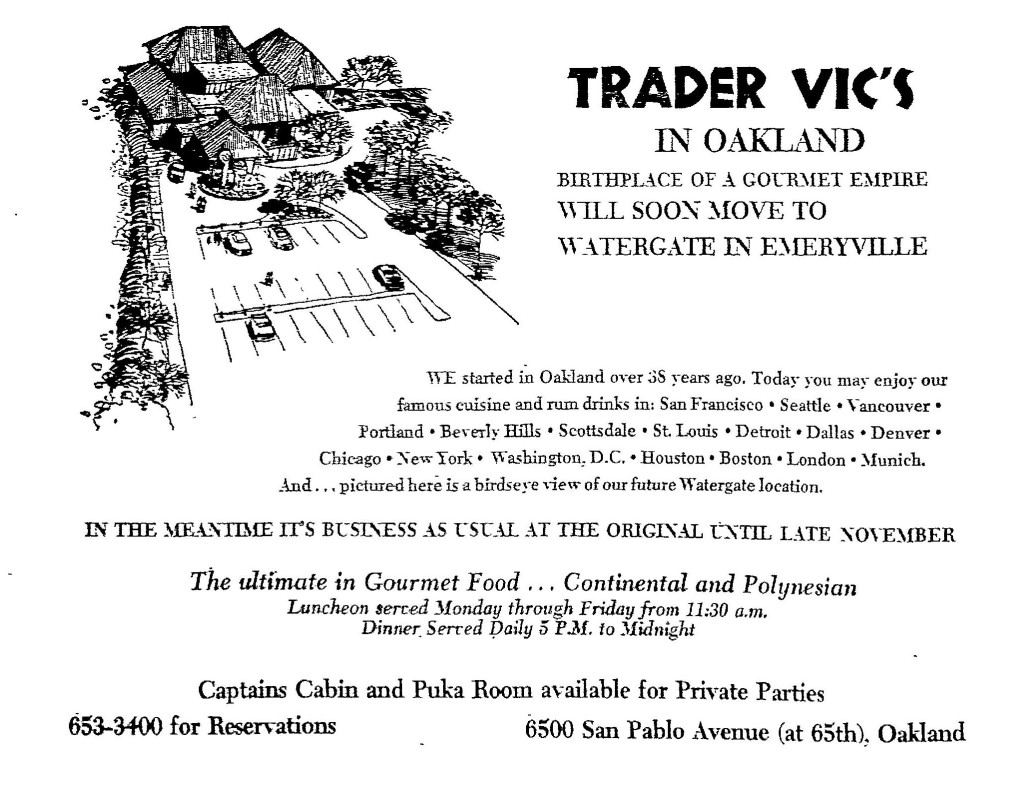 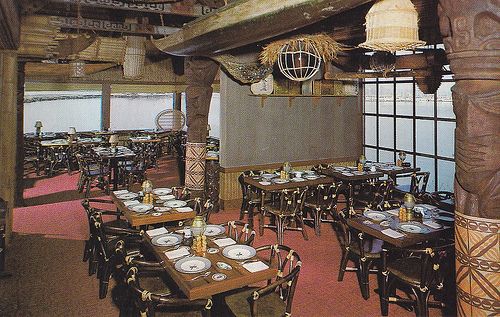 Some new Trader Vic’s locations opened in the Bay Area in recent years (Palo Alto, 2001-2012 & San Francisco, 2004-2007) but Emeryville has remained the flagship location of Trader Vic’s in the world. The company has its headquarters there and much of the decor from now-closed locations around the country ends up at this Trader Vic’s. 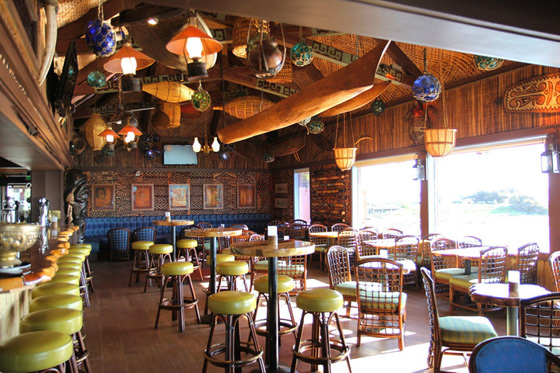 bar and lounge, Trader Vic’s Emeryville via EaterSF on Flickr

The Emeryville location has seen some remodeling since my first visit about 20 years ago. There was an unfortunate remodel of the cocktail lounge several years ago which gave it a white a-frame ceiling and a lighter nautical look. In 2010 it closed for a few months but thankfully came back looking better; a return to the classic tiki bar look with more tikis and traditional decor throughout the restaurant. And the a-frame ceiling over the lounge is looking great again! There is a lot to see so when you visit take some time to look at the items hanging on walls, above, and around you. 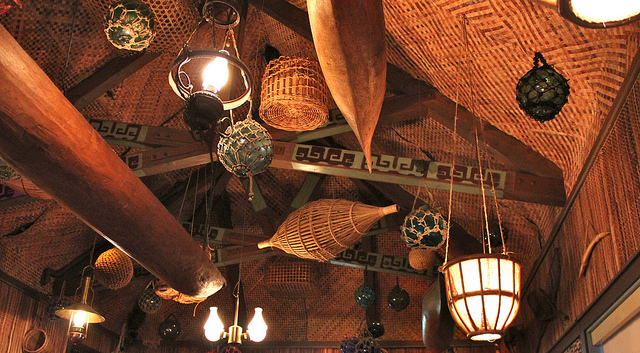 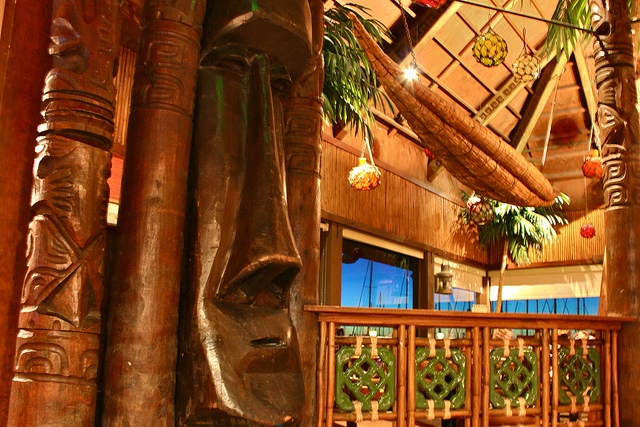 The dining room is wonderful, with large windows looking out on the marina and towards San Francisco. Try to reserve a table with a window view for a romantic meal without peer in the Bay Area. 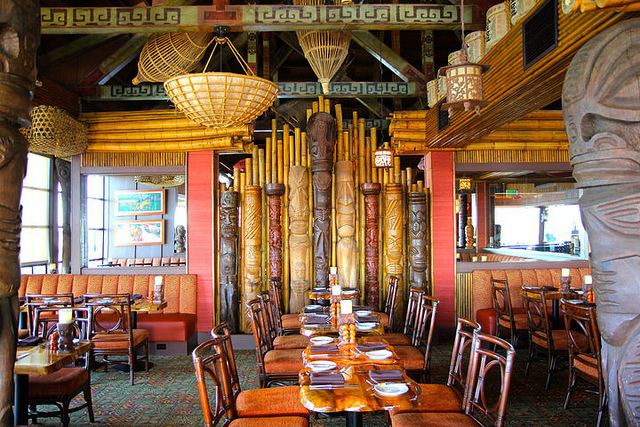 The food has also gotten better since my first visit. Highly recommended are anything from the Chinese ovens (the pork chop and steaks are great). And you have to get a Mai Tai where it was invented! Tip: order an “original Mai Tai” which is made from scratch rather than from a mix. 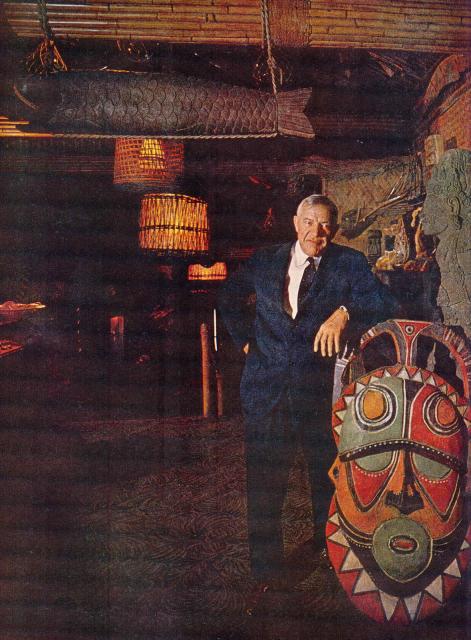 Sadly, we lost many classic Trader Vic’s in recent years, so the remaining two are treasures to be enjoyed as often as possible. So won’t you check out Trader Vic’s in Emeryville when you visit the Bay Area? Please tell maître d’hôtel Claudette Lum that I sent you.