A couple of weeks ago we featured Original Joe’s relatively new location in San Francisco and learned a bit about the history of Joe’s restaurants.Today we’ll be visiting the second of the still-open Bay Area Joe’s to open, Original Joe’s in San Jose, which was opened in downtown in 1956 by Louis J. Rocca, one of the partners in the San Francisco Original Joe’s, along with his son, Louis J. Rocca Jr. (Babe), Arthur Tortore (Otto) and Anthony Caramagno (Nino). To this day the restaurant is still owned and operated by the Rocca family, namely Brad and Matt Rocca. 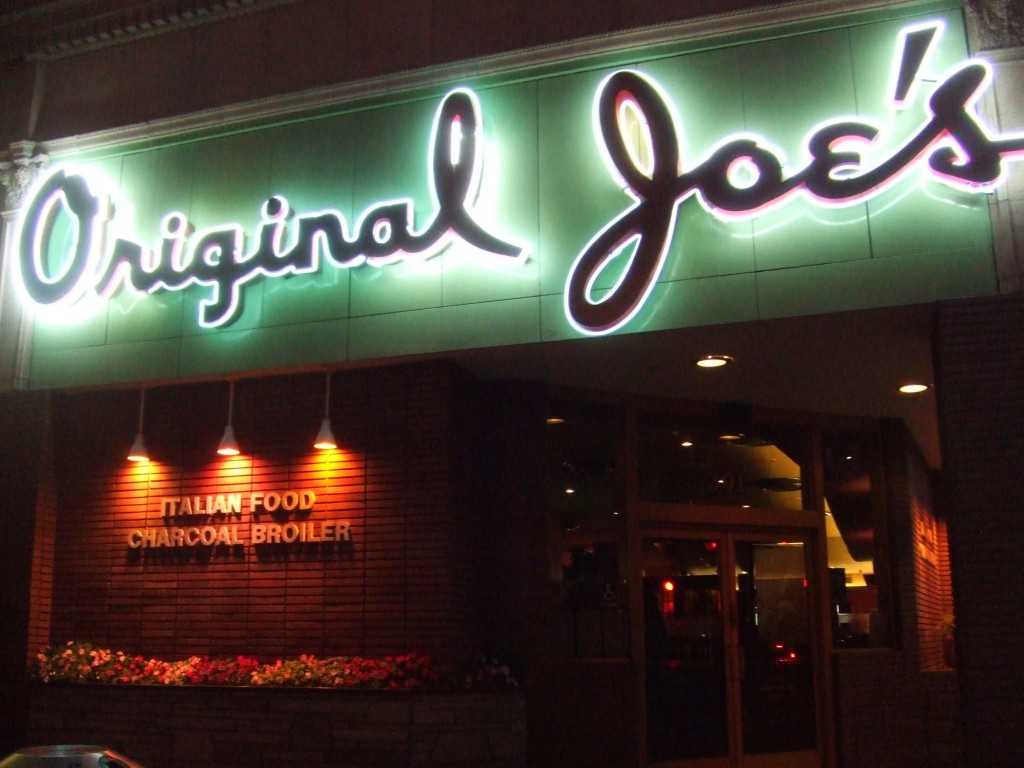 The first time I visited Original Joe’s San Jose in the late 1990s I was in awe of the frozen-in-time look of the place, not only on the outside, but on the inside too. Along with the San Francisco Original Joe’s in its original location, this was one of the best preserved mid-century restaurants in the entire Bay Area. Much of the decor was still the same as in the 1960s postcard below. Look closely at the background of the photo for a peek into the bar (view it at full size in the link) and you can get a bit of an idea of how spectacular that 1956 modern bar was (wall of Roman brick veneer with fireplace, vertical wood-paneled sections, freeform padded bar with low-back bar stools, backlit copper wall art, planter divider). The restaurant was still almost the same inside in 2006, when the following pictures were taken (the only additions seem to be carpeting, glass partitions on the middle room divider, and different plants). In the summer of 2007 the restaurant closed for a few months for an extensive retrofit and remodel. Thankfully, they didn’t ruin the old atmosphere in the restaurant. On the other hand, the bar didn’t fare so well. Sadly, it was remodeled beyond recognition. I do have a few quibbles with the restaurant remodel, namely the granite counters, which to me don’t look right in a classic restaurant. But I’m glad it’s still open and has some original features still present, such as the textured ceiling with indirect lighting, Roman brick wall veneer, wood paneling with copper decorations, planters, and even the original vases that you saw in the previous postcard from the 1960s! 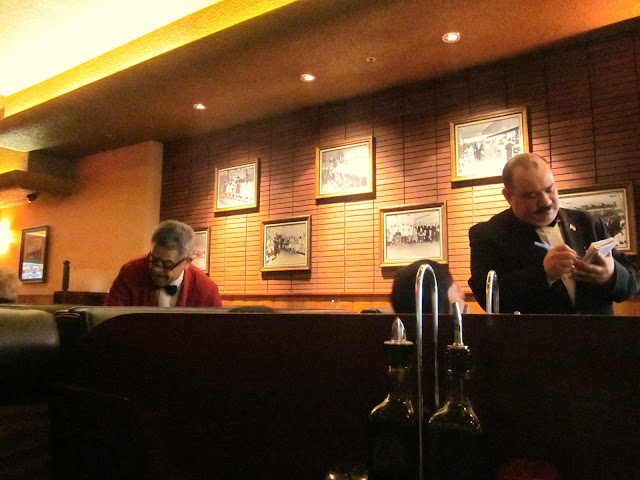 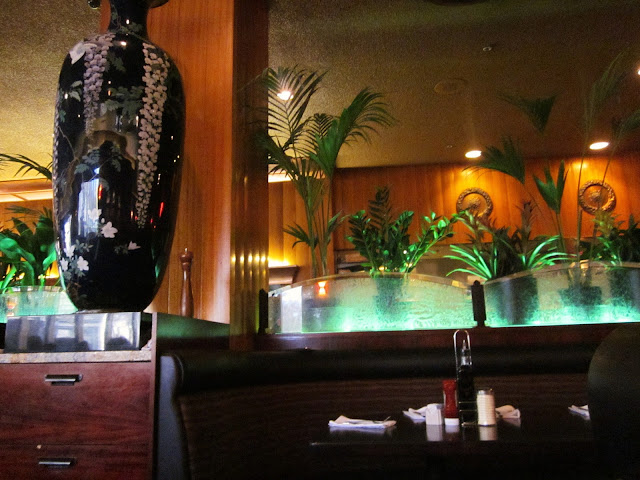 As you probably gathered from the photo above the waiters still wear tuxedo dinner jackets and bow ties and many are veterans at the restaurant, with the proper level of professional, non-nonsense service. Sometimes people complain online about this kind of old-fashioned service because it may seem unfriendly, but the way I look at it they are almost always very busy and want to give you quick service so they dispense with the chit-chat and get down to business. That’s fine with me.

A definite plus is their night owl friendly hours: they are open until 1:00am every night! The menu is similar to the other Joe’s restaurants, featuring Mesquite grilled steaks, chops, and seafood, Italian dishes, and of course the Joe’s Special and charbroiled cheeseburger served on a French roll. The portions are enormous so the prices are reasonable. If you get spaghetti and meatballs for example, and I recommend it, you get a huge oblong plate covered with spaghetti, sauce, and a gigantic meatball that’s as big as a softball! I also recommend the steaks, which are aged Angus beef. Dinner entrees come with choice of French fries, baked potato, spaghetti, ravioli, or vegetables (also large portions). The Jab at Original Joe’s San Jose, 2009. Image by Carrie Swing on Flickr.