If you’re looking for a true Continental restaurant in Las Vegas, there is only one: Hugo’s Cellar. It’s a great pick if you want gracious table-side service, flambé dishes, and an old-fashioned (i.e. old school) dining experience. 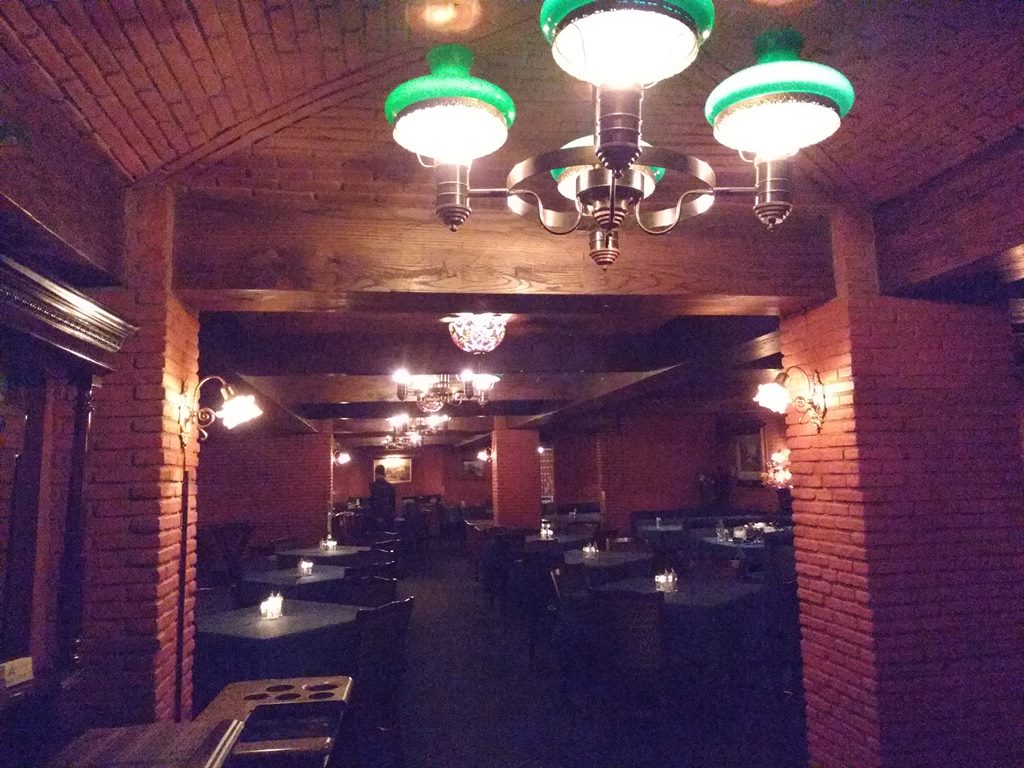 Hugo’s Cellar’s is located (you guessed it) beneath street level, under the main casino at the Four Queens in downtown. Enter the noisy casino from hectic Fremont Street, look for the restaurant’s staircase in the back of the casino, and descend into a more peaceful and genteel world. There is a small bar and cocktail lounge in the front, and the maître d’hôtel‘s stand, where you will be greeted and the ladies presented with a long-stemmed rose. The dining room is decorated with brick, thick wooden beams on the ceiling, green lanterns and Tiffany lamps. It has an elegant old-fashioned feel that seems older than its origin in 1973 as Hugo’s Rotisserie (when the hotel was owned by Hyatt Hotels). The Four Queens has changed hands a couple of times since then but Hugo’s has remained (it was renamed Hugo’s Cellar about 30 years ago). The most recent owner of the hotel vowed never to change Hugo’s – bravo! 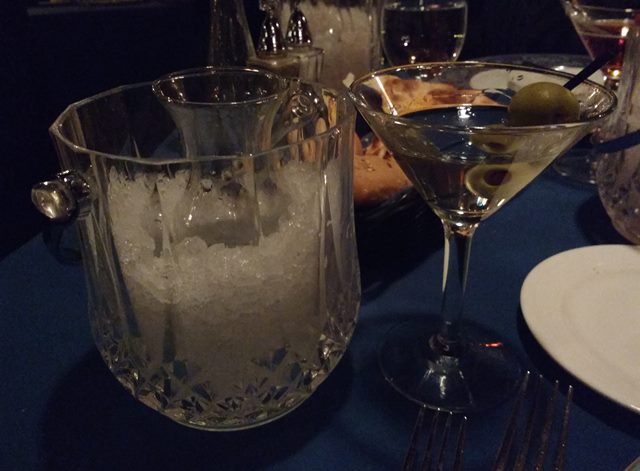 the martini came with a refill!

The tuxedoed waiters are all highly professional, some with decades of service at Hugo’s. Waiter Victor Hutchings has been with the restaurant for 39 years and sommelier Jon Simmons for 32 years (when he started in 1984 he was one of only three sommeliers in Las Vegas restaurants). Service was very attentive and gracious, with multiple staff attending to our table of three. 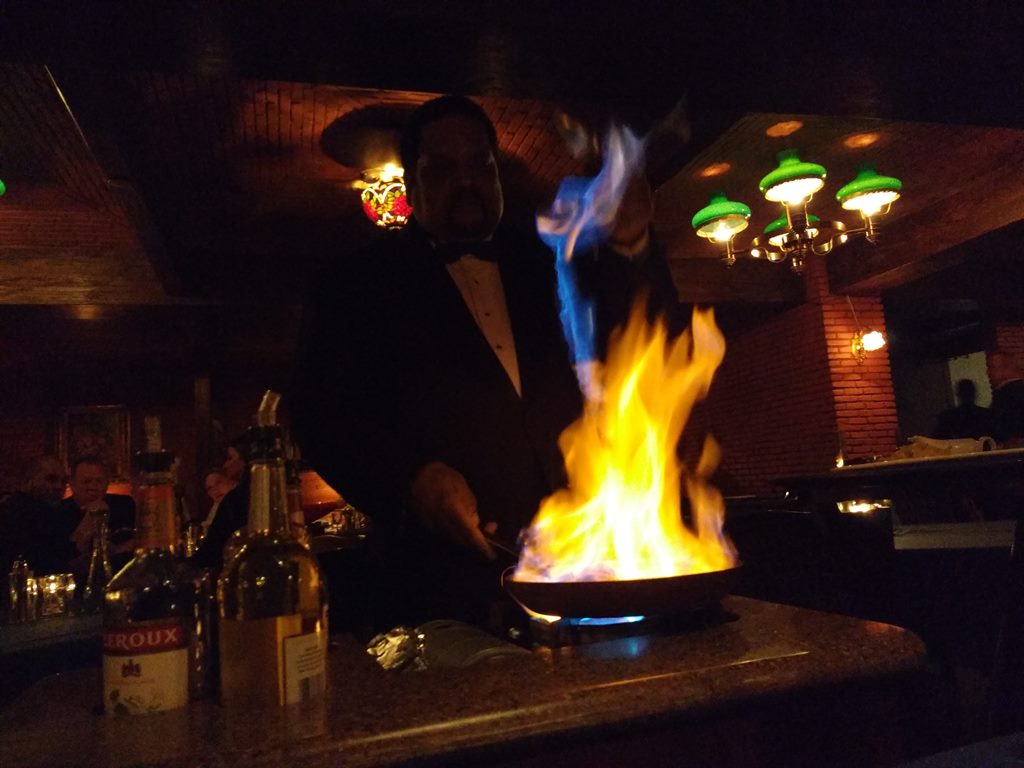 The menu is truly Continental, featuring such classics as duckling anise flambé, veal Oscar, chicken champignon, and beef Wellington. But it’s also a fine steakhouse with char-broiled steaks aged 28 days, as well as prime rib and seafood entrees. All entrees include a salad prepared table-side how you like it from a rolling cart, vegetables, potatoes or rice, delicious homemade bread and cheese-toasted lavosh, dessert of chocolate dipped strawberries and fruit, and bottled water. Service was impeccable, with multiple waiters attending to our every need. 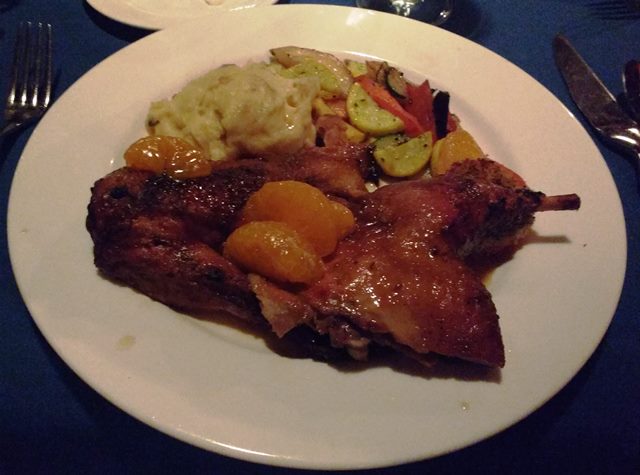 After-dinner fruit is included with your meal but you should definitely try one the flaming table-side desserts like bananas Foster or cherries jubilee!

The next time you are in Las Vegas, you should check out downtown. There are lots of hotels (I like Main Street Station), the fascinating Mob Museum, a few good cocktail bars, a shopping/food/entertainment center called Container Park, and some great classic restaurants like Hugo’s Cellar and Binion’s Ranch Steakhouse (now called Top of Binion’s but I prefer the older name), which I didn’t visit this trip but I have dined at before. On my last three visits to Las Vegas I mostly avoided the Strip and I didn’t miss it at all.

I know what you’re thinking. “CIRCUS, CIRCUS? It can’t be good!” The Steak House with no name in the 1970s circus themed casino has long been on my list of steak houses to try in Las Vegas. It is the highest rated steakhouse in Las Vegas in Zagat Survey for food at 28 points (out of 30), with a very respectable 24 for decor and 27 for service. There are nine steakhouses in Las Vegas in Zagat that scored close – 27 for food – but they are all newer, not classic in appearance like The Steak House. 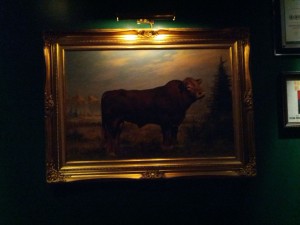 Circus Circus opened in 1968 and has expanded many times since then, with The Steak House opening in the 1983 expansion.The decor was well done (for 1983) in a men’s club style with lots of wood, brass lamps with green shades, and framed pictures of western scenes and cattle. After navigating the casino filled with families with screaming children you enter an oasis of calm and elegance. On entering you pass the dry aging room with windows so you can see the meat aging inside and a small bar area. The restaurant was nice and dark; just the way I like it. I was seated on the upper level with a good view of the dual mesquite charcoal broilers and prime rib carving station. Music by Dino and Sinatra was playing at a low volume. 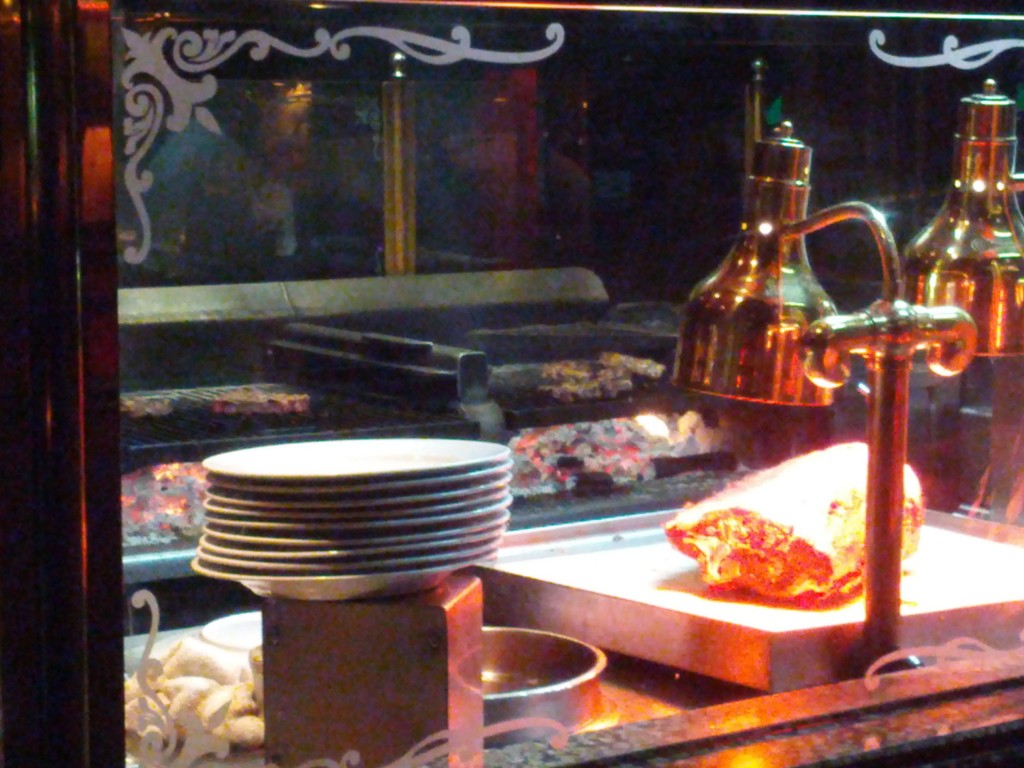 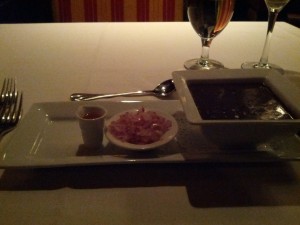 I liked the leather bound menu with a steer’s head gracing the cover. Dinners come with a choice of black bean soup or salad, excellent house made breads, vegetable, and choice of potato. Considering you get all that the prices are not unreasonable at around $50 for an aged prime steak or aged prime rib (as most high-end steak houses in Las Vegas are ala carte, so by the time you order a starter and sides you are way over $50). The black bean soup is their specialty and it was without a doubt the best black bean soup I’ve ever had. It comes with a small pitcher of dry sherry and minced shallot to add to the soup if desired.

I ordered a New York Strip ($47) “Pittsburgh” style, which was my downfall this time. I have ordered a steak this way in the past and a couple of times it was burned beyond the desired dark brown char of “Pittsburgh”, so I was gambling with such an expensive steak. 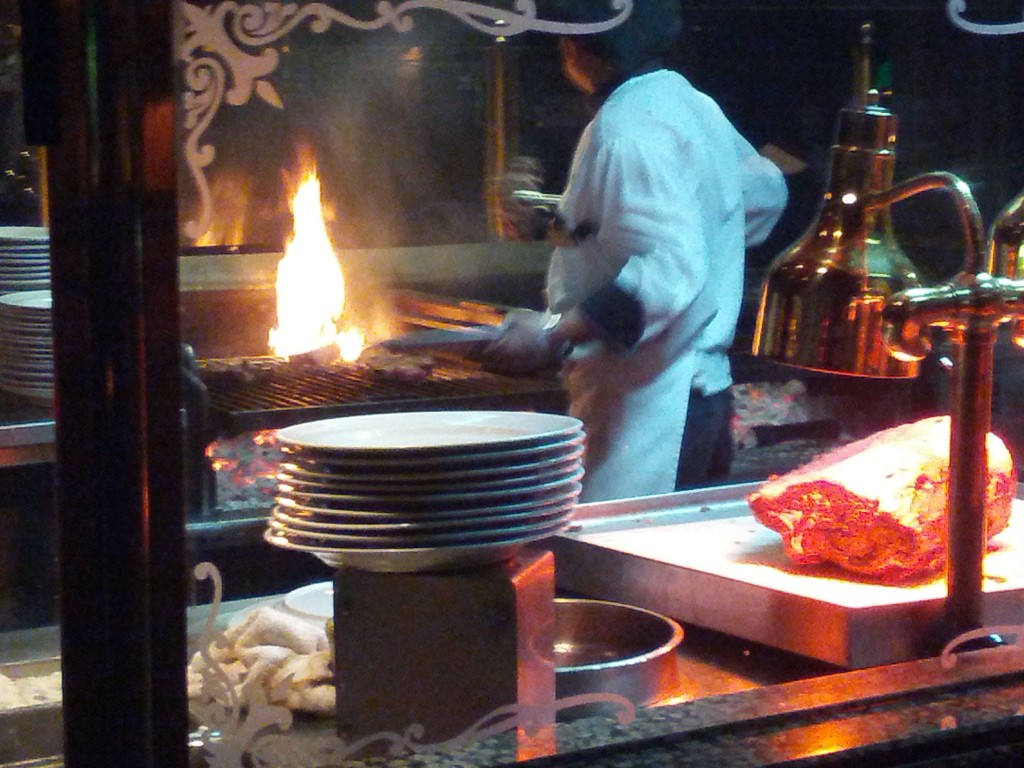 I was pretty disappointed this time with the results. Although my steak was done just right (medium rare) on the inside, the crust was black, so it had a bitter flavor. I cut off the sides and ends but it didn’t save it. I could have sent it back but I was running late to catch a show I had a ticket for across town, so I ate it as is. I learned my lesson. I won’t be ordering my steaks “Pittsburgh” again, except at places where I know they won’t burn it (like at the Golden Steer).

The service was excellent, the atmosphere just right, and the food was delicious with the exception of my steak. I would return to The Steak House again and try the prime rib, which looked excellent (my pic above did not do justice), or another steak.

The Golden Steer has been my favorite restaurant in Las Vegas since I first visited with friends while attending the Viva Las Vegas weekend in the late 1990s. Originally opened in 1958, expanded by adding the bar and lounge in the 1970s, and remodeled in the 1990s, it retains an old-fashioned Victorian steakhouse ambiance. It is the third oldest restaurant open in Vegas, after El Sombrero (opened in 1950), and Bob Taylor’s Ranch House (1955), which I covered last week in part one. 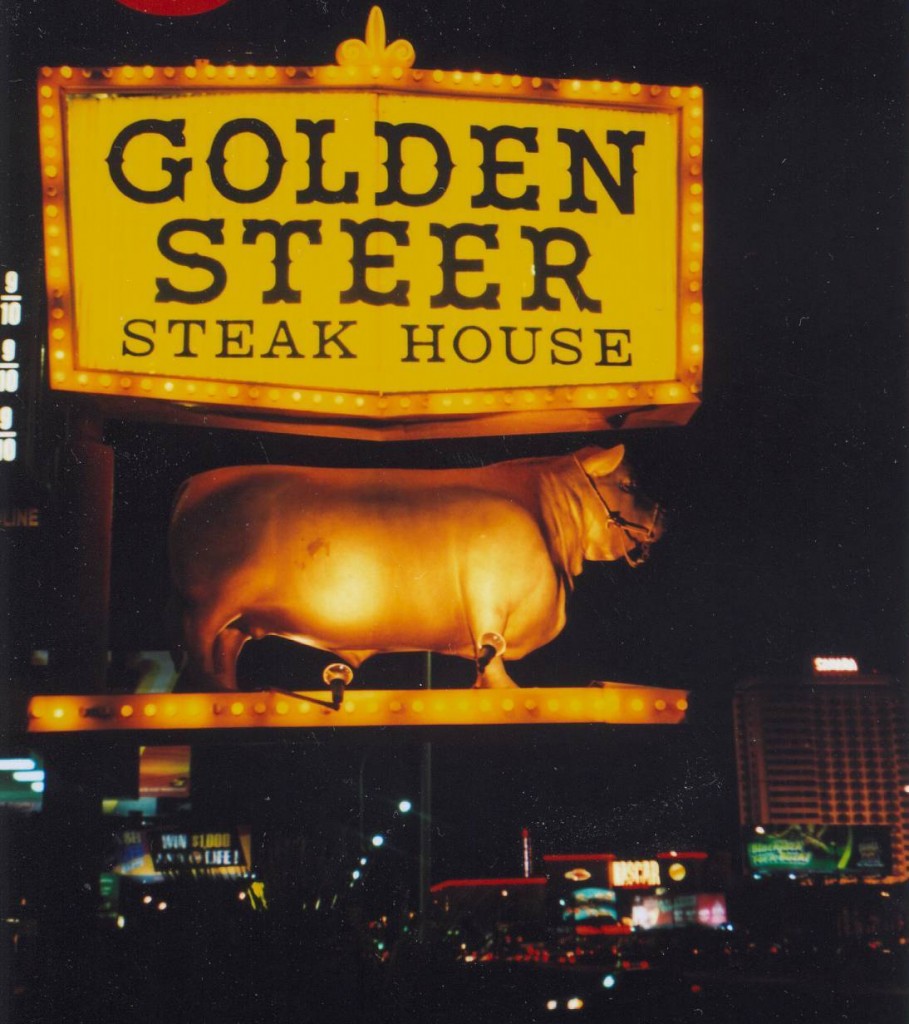 You can’t miss the place for the spectacular sign out front, but the building itself is nondescript, part of a small strip of shops with parking out front (and no valet service). Once in the bar, have a seat on one of the red bar stools and order a Manhattan. It will be served in a huge cocktail glass. You’re getting a double so it’s worth the high Vegas price, but I prefer my cocktails smaller. The cocktail should be a short, cold drink, so it can be enjoyed before it starts getting warm (which is why most vintage cocktail glasses you find are 3 ounces). Some of my favorite steakhouses (like Harris’ in San Francisco) serve cocktails in a 3 ounce glass with a mini-shaker or pitcher on the side, so you can medicate at your own pace. I wish the Golden Steer did the same. But it’s a minor quibble. I love everything else about this place.

The dining room at the Golden Steer continues the Victorian club steakhouse atmosphere with wood-paneled walls, button-tufted booths, and paintings of Wild West themes. Take a look at the plaques on some of the booths honoring celebrities who have dined here, including Dean Martin, Frank Sinatra, Sammy Davis Jr., John  Wayne, Elvis, and many, many more. For an appetizer I suggest their specialty escargots de Bourgogne. Le Continental always goes for tableside preparations so I also highly recommend the Caesar salad, prepared tableside of course. The Golden Steer serves aged prime corn-fed Midwestern beef and the steaks are excellent. I usually order the 20 oz. bone-in rib eye. On my recent visit with some local Vegas friends I asked for my steak done medium rare ‘Pittsburgh’ style, which means it’s cooked with a good dark brown crust, and it arrived perfectly done. Warning: use ‘Pittsburgh’ when ordering steaks with caution. As you will see in my next post you could get burned, literally! 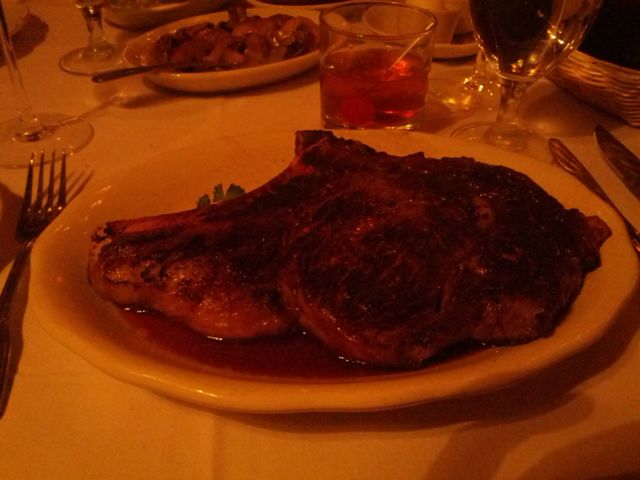 The potatoes and the sides are always good at the Golden Steer. This time we had creamed spinach and sautéed mushrooms. Both were delicious! The baked potatoes are huge and fluffy and you can also get old-fashioned Lyonnaise potatoes.

After dinner how about a flambéed desert, such as Cherries Jubilee or Bananas Foster? Both are made tableside and are the perfect way to end a fabulous meal at Las Vegas’ best steakhouse. 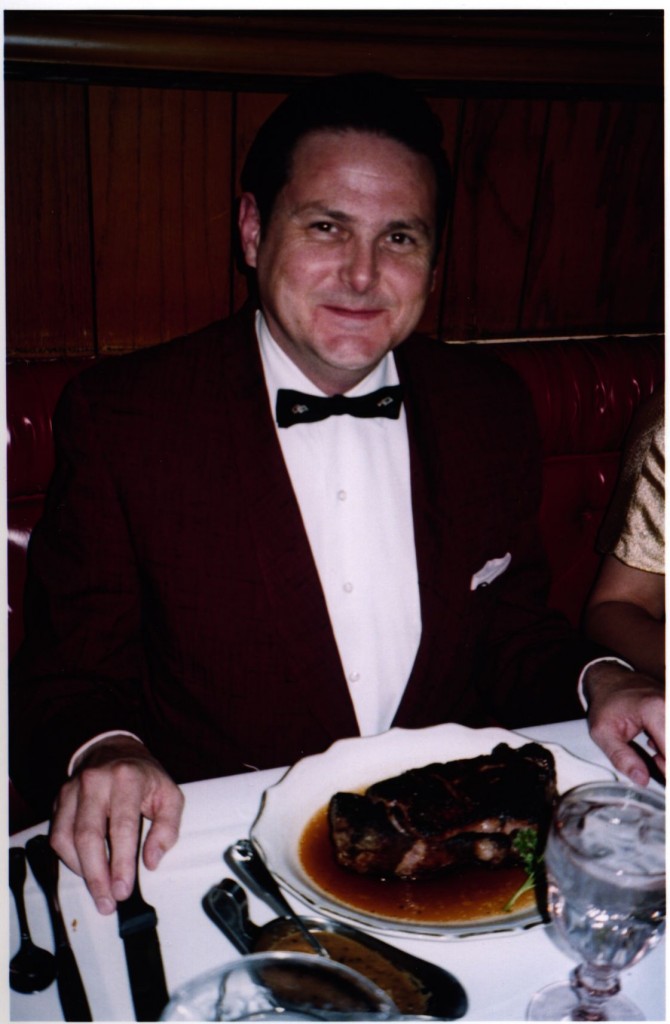 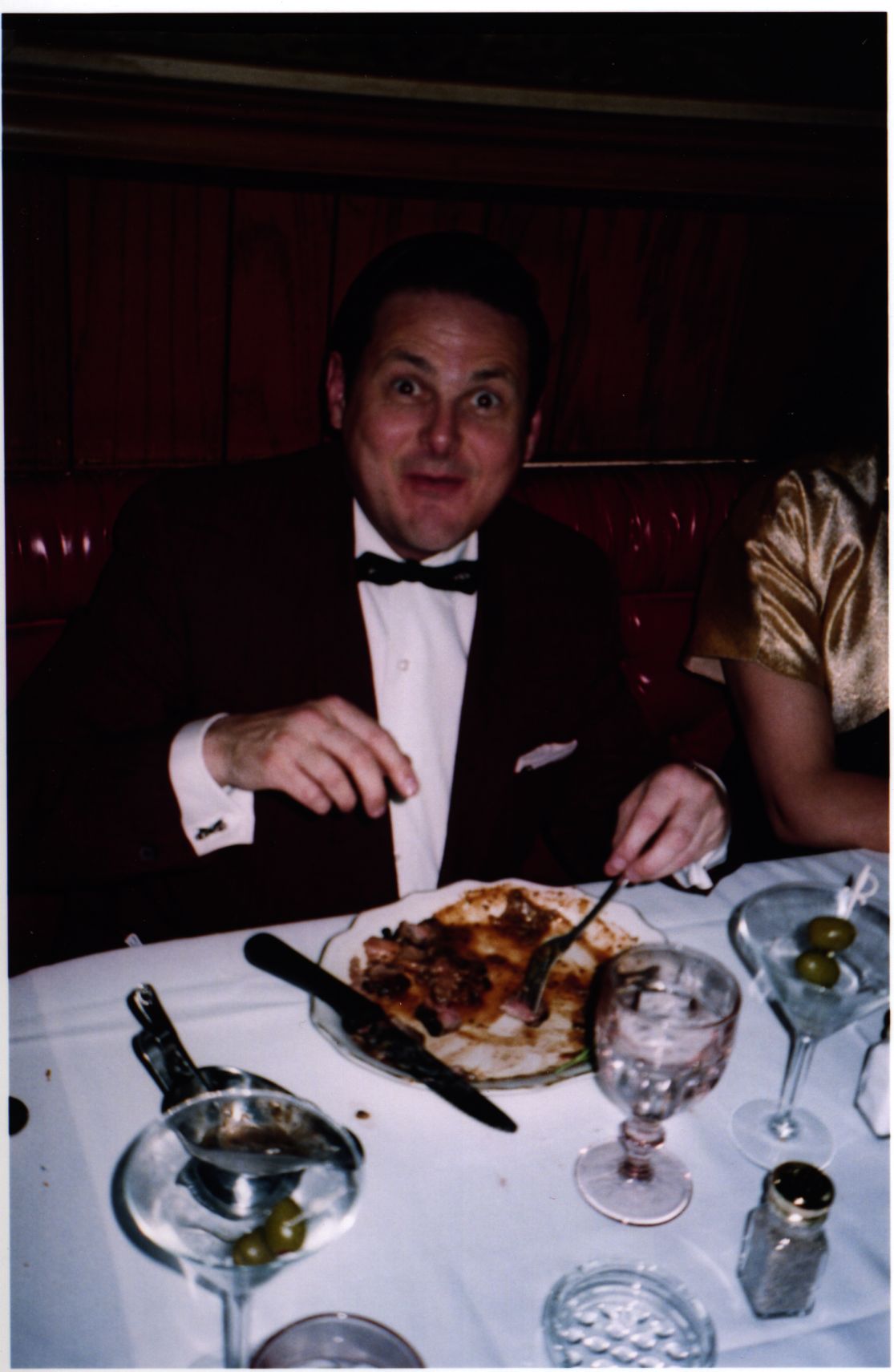 An oasis in a desert of suburban tract homes and chain stores on the outskirts of Las Vegas, Bob Taylor’s Original Ranch House stands on a large plot of land that makes you feel like you are on a cattle ranch when driving up their long driveway lined with a wooden fence and wagon wheels. Bob Taylor opened the restaurant on 80 acres of remote desert in 1955 as the Ranch House Supper Club. He personally cut and cooked the steaks over mesquite coals for his guests until 1980, when he sold the restaurant and the new owner changed its name to Bob Taylor’s Ranch House. 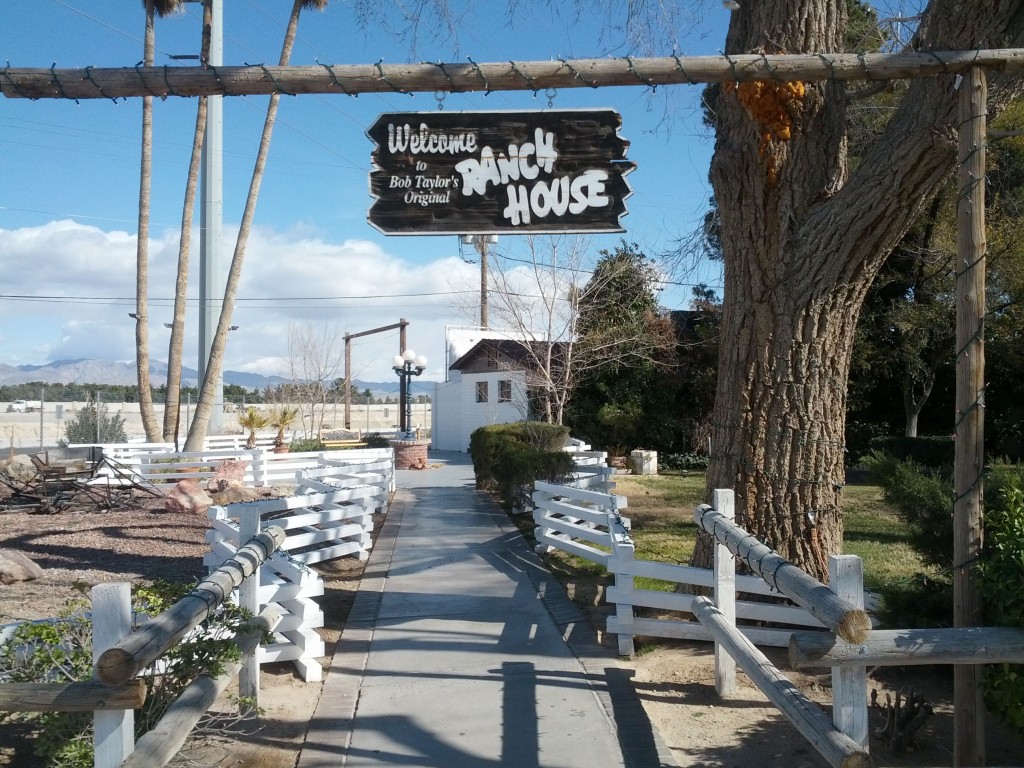 Upon entering the low ranch house style building there is a bar with a large lounge on your left with a great number of TVs in it, but continue ahead past the hostess stand and right in front of you proudly sits the mesquite grill, so that everyone who enters the restaurant can see and smell the meat cooking away. If it doesn’t make your mouth water you are probably a vegetarian (haha, just kidding my veggie friends). I visited at lunch time on a Saturday, and I was saving my appetite for dinner at the Golden Steer, so I had a hamburger. It was tasty after being grilled over mesquite coals, though it was cooked medium and not the medium rare I had ordered. The bun was nice and fresh and the onion rings I had on the side (for a small extra charge) were good. 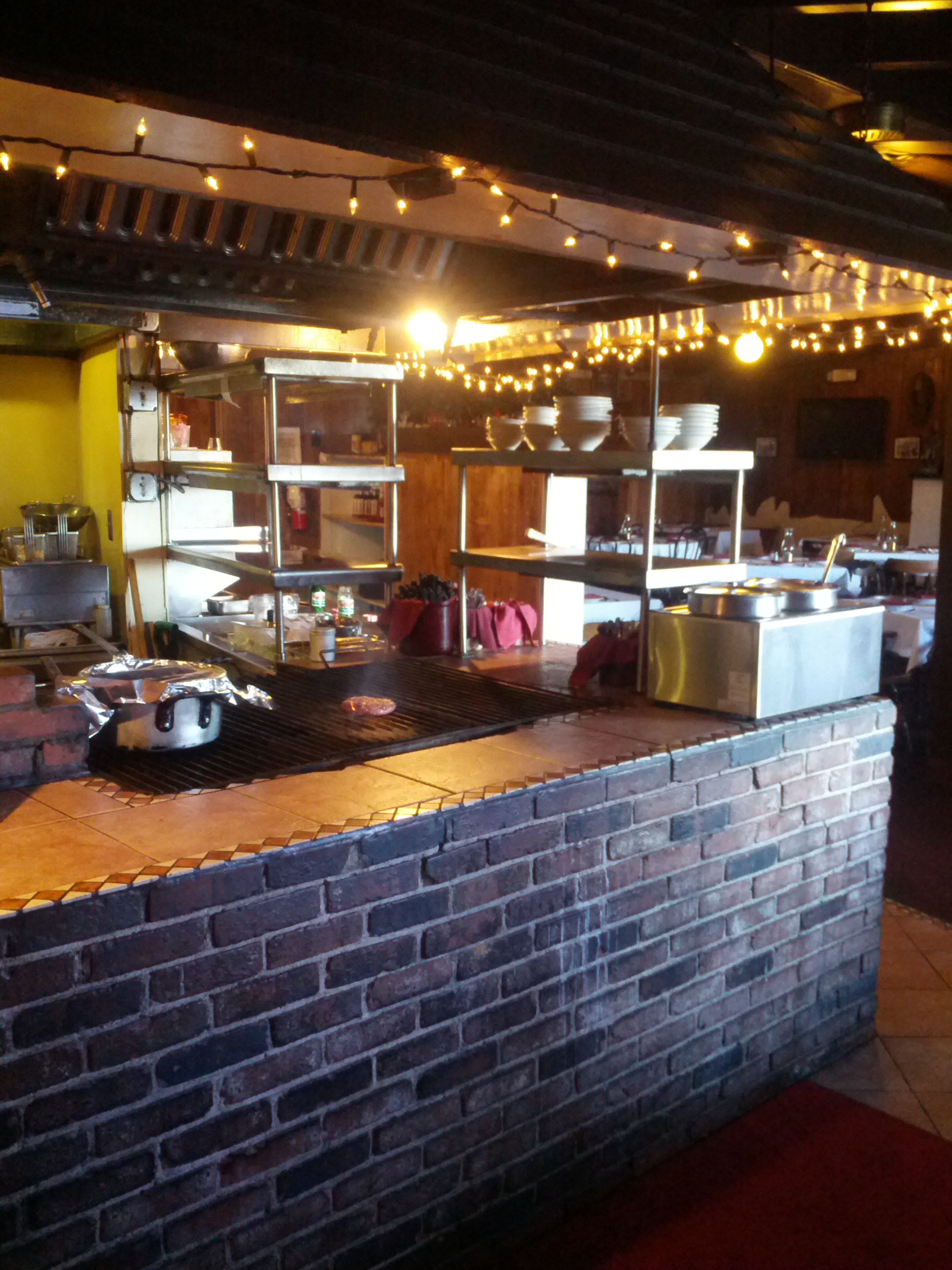 The dining room is in classic rustic western style, with (most likely the original) wood tables and chairs, white tablecloths, and appropriately vintage looking candle lanterns on each table. There is a nice big fireplace that was filled with wood during my visit but it was not lit, despite the cold temperatures outside. Western themed pictures cover the rustic wood walls. Unfortunately, so do some large TVs, which thankfully were turned off when I was there. I can imagine the room might look nice at night as long as they don’t turn on those damn TVs. 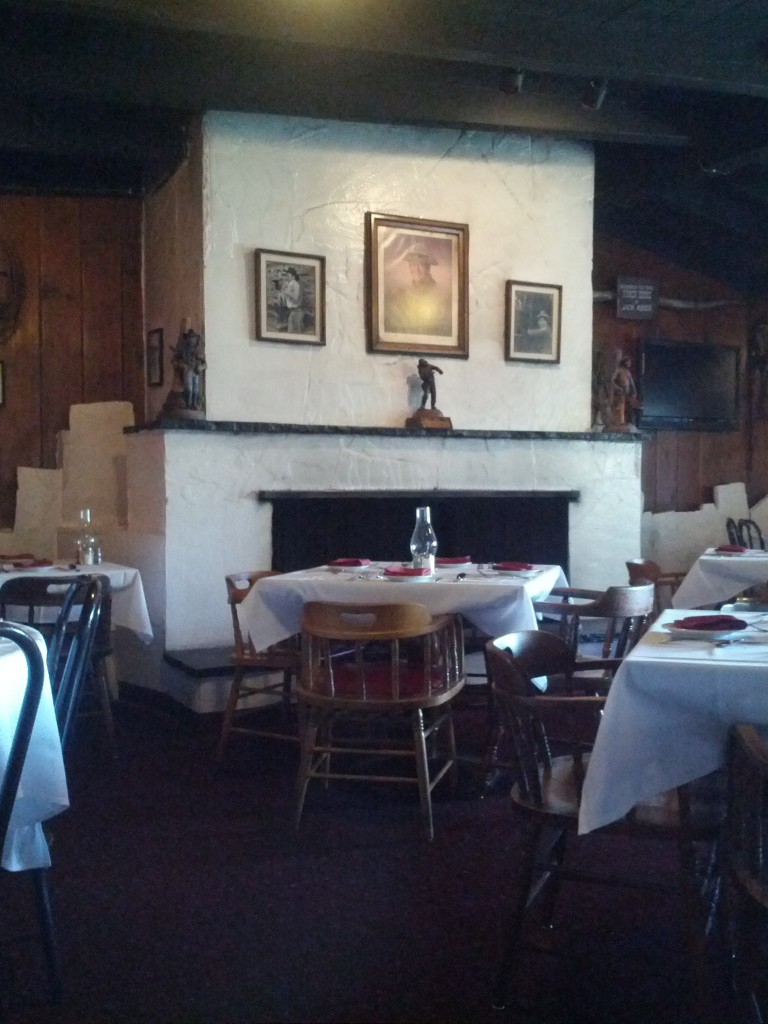 I expressed concern to the waiter that the Ranch House was surrounded by recent development and is right next door to a large road or canal project (visible in the first photo above). But she assured me that the place is very popular and it isn’t going anywhere. Still, just imagine how much the land is worth (you could build several houses on its lot) and you can see how the Ranch House should be on your list for your next visit to Las Vegas, because who knows how long it will remain?