Every fall I like to do a long weekend drive into the mountains of Northern California to see the fall colors. If timed right there are some areas that rival anything back east or in the Rockies, such as massive groves of aspen turning gold in front of dramatic snow-crowned mountain peaks. My favorite areas for fall color are the eastern Sierra along U.S. 395 and the surrounding roads, such as the spectacular June Lake Loop highway, and the Feather River Canyon from Oroville to Portola in Plumas County. This year I went with some friends back to the Feather River route (we previously went together in 2010), but this time instead of starting in Oroville to a base in Quincy this time we started in the overdeveloped gold country towns of Grass Valley & Nevada City, heading northeast on scenic highway 49 through sparsely populated Sierra County (pop. 3,240 and only one traffic light) to the hidden Lakes Basin, then on to Portola to spend the night. The next day we drove to Quincy and down the beautiful Feather River Canyon. Along highway 70 between Quincy and Portola lies the charming small town of Graegle, which used to be a company town for the Graegle Lumber Company, a box manufacturer for the California Fruit Exchange in the 1920s through the mid-1950s. The town consists of several small red houses from the company town (some converted to businesses), the friendly Knotty Pine Tavern, a few motels and cabins, and, surprisingly, three golf courses. It makes a great base for exploring the Lakes Basin Recreation area nearby, a beautiful mini-Sierras of cragged peaks and dozens of lakes. Nearby to Greagle is the tiny town of Johnsville and its only business, the Iron Door restaurant. 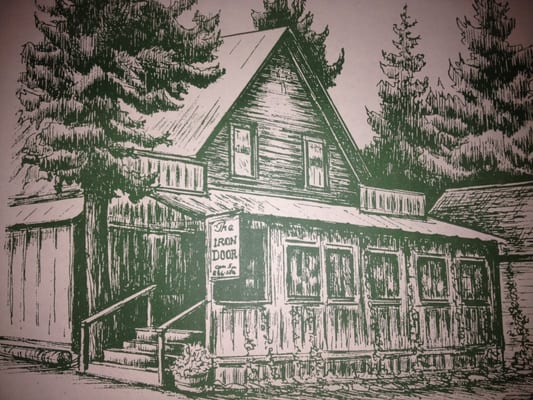 In 1951 gold was discovered on the slopes of Eureka Peak in Plumas County. Johnsonville was founded in 1876 at the base of the peak to house and cater to the growing mining population. The building that is now the Iron Door was built in 1906 and served as a general store and post office, but the mine closed in the 1940s (some of the mine’s artifacts, buildings, and equipment are preserved in the interesting Plumas Eureka State Park next to Johnsonville). In 1961 the Iron Door restaurant opened; and it remains in the same historic building (the only commercial building left in the small town). When entering the restaurant you pass the bar on your left and then enter the main dining room, a large room with an open ceiling of beams and rafters and a floor of pine. The room is filled with antiques and artifacts, making for a cozy, homey atmosphere, and giving you plenty to look at when nature calls. Be sure to look at the longboard skis on display above the bar. In 1853 a Norwegian miner introduced longboard skiing to the region and in 1861 the miners on Eureka Peak started the first downhill ski competition in the western hemisphere! Every winter longboard ski races are still held by the Plumas Ski Club, with the skiers wearing period attire. Our waitress told us that she even participated in the race, and that you reach very high speeds because you have to go straight down the mountain!

The menu at the Iron Door consists of steak, seafood, German schnitzel, and pasta dishes, with some daily specials such as veal piccata. Everything is house made and delicious. I went with a steak, which was tender, flavorful, and done perfectly. After dinner we tried the house “Johnsville special” dessert of vanilla ice cream, crème de menthe, and Ovaltine sprinkled on top, served in a parfait glass. It sounds strange but it was good! And it was old-fashioned, which I always appreciate. 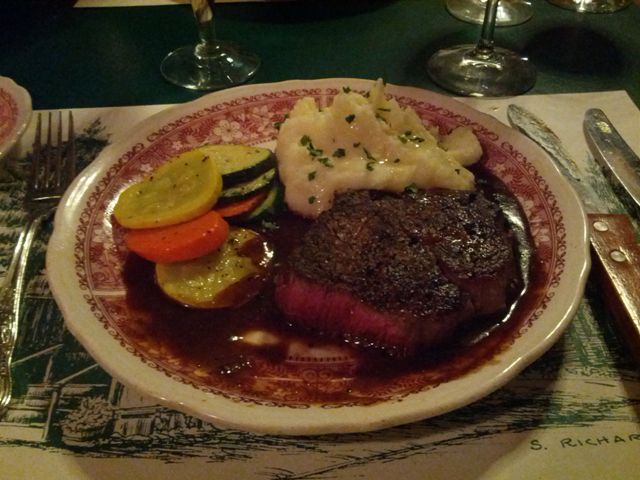 I cheated and took a bite before taking the picture! Image by The Jab.

The Iron Door is only open in May-October and is very popular among locals and visitors-in-the-know so it’s best to make a reservation. And go early (they have a lovely bar for that before dinner cocktail) because most small towns in the mountains roll up the rugs at around 9:00 or 10:00. Although I like fall best, the Plumas County area is also great in the spring and summer. There are some nice lakes and the fishing reportedly is some of the best in the state. The area is much less crowded than the mountains south of I-80. Just don’t tell everyone. Let’s keep it our little secret, OK?

Here are some fall color shots I took on this trip and last year in the Eastern Sierra. See you next fall, fellow leaf peepers! 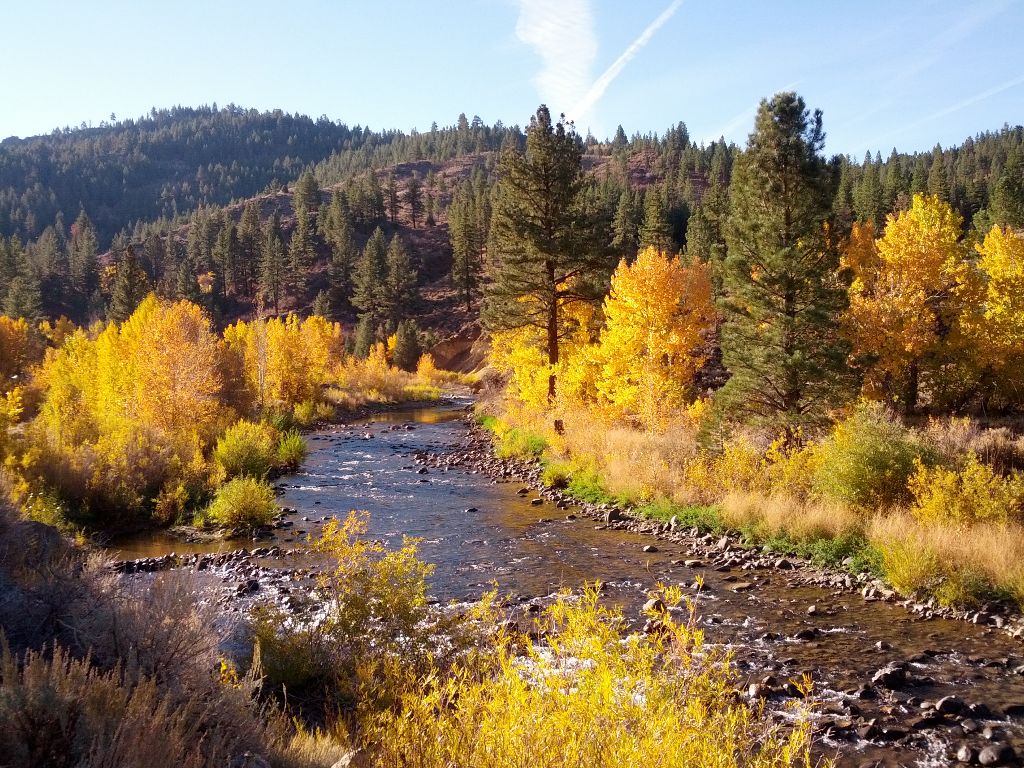 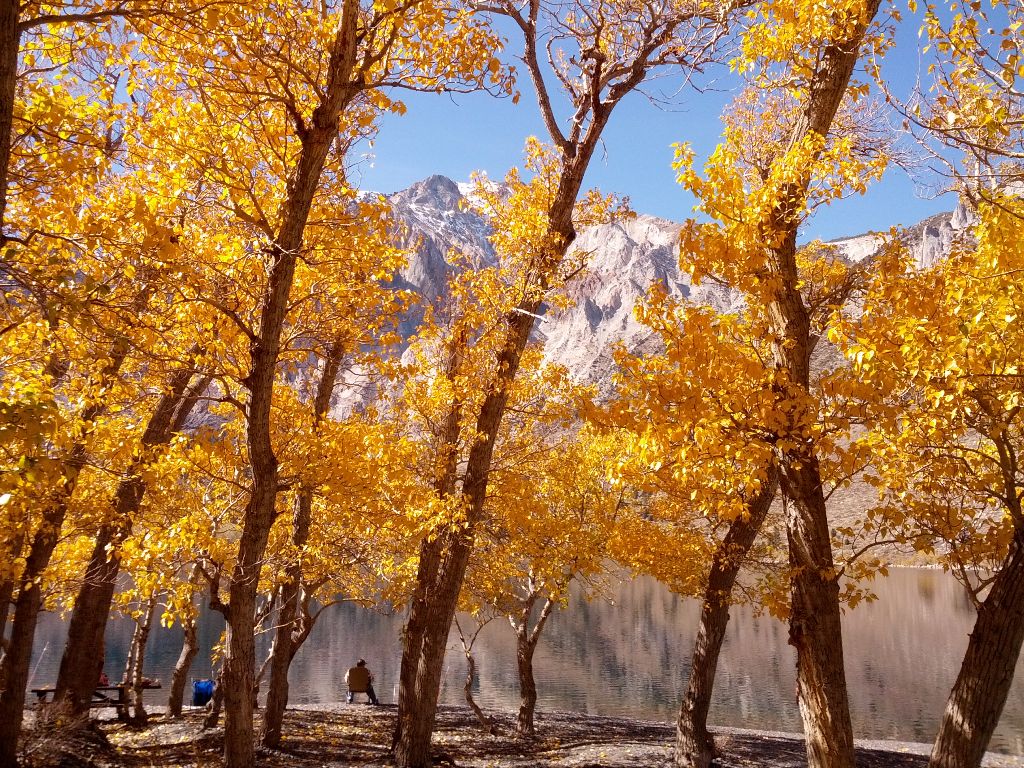 Recently I posted about my two-week road trip from Chicago to Oakland in 2003, mostly on two-lane U.S. highways. Today we return to a stop on that road trip, the historic Old Faithful Inn in Yellowstone National Park. Staying in one of the historic lodges in a National Park is a special treat so I prefer spending a few nights in one over staying outside the park in a standard motel or hotel. Usually they are more expensive so it depends on my trip’s budget. But in general they are worth the additional cost. The Old Faithful Inn definitely was worth the money because of its historic charm and its location near Old Faithful Geyser. I couldn’t get a decent picture of the soaring lobby of log and branch balconies surrounding a massive stone fireplace so this vintage postcard will have to do. In 2003 we paid only $75/night for a small but charming double bed room in the original hotel building, saving money by forgoing the en suite bathroom and using the shared bathroom instead (which was clean and perfectly fine). The same room in the 2014 season will run $109. There was a multi-million dollar renovation of the hotel from 2004-2012, which probably explains the slight cost increase. For around $100/night you get an incredible & unique experience in a beautiful lodge, something you have to pay several times more money for at the Ahwahnee Inn in Yosemite. Many people have complained online about the thin walls and basic accommodations in the Inn but to me that is part of the going back in time feel. I don’t need or want a phone, TV, or fancy amenities in a lodge that was built in 1904. I would rather have this:

There are also rooms in the c. 1920s west and east wings that are modernized. Before booking our room I read many online complaints about the rustic old rooms: how they are uncomfortable, noisy, drafty, lack bathrooms, etc. I was glad that I ignored the negatives and focused on the positives: charming, filled with character, like going back in time. Many thanks to the National Park Service and the companies involved in the recent restoration: A&E Architects, H-C Design & Consulting, and Xanterra Parks and Resorts (the concessionaire that runs the hotel), for not modifying the original character of the hotel and the “old house” guest rooms in the renovations.

You have to book way in advance for the privilege of staying at the Old Faithful. The summer of 2014 is fully booked, but there is still availability during the less crowded shoulder months of May, September, and the first half of October The lodge is closed from mid-Oct until mid-May. The dining room was constructed in the original phase in 1903-04 with exposed log scissors trusses and a huge stone fireplace.

At mealtime, guests in those early years ate together (appropriately dressed) in the rustic log-walled Old Faithful Inn dining room. A dinner bell atop the Inn alerted those venturing among the geysers and hot springs when it was time to return and make themselves presentable for dinner.

The dining hall was brightened with large windows, an open fireplace, and Reamer’s electric candle light fixtures. Guests sat on rustic chairs at tables set with brightly polished silverware and china of a blue willow pattern.

As guests ate, a group of musicians played for them on a small balcony extending from the lobby and overlooking the dining room. After dinner, these musicians climbed to areas such as the “crow’s nest” near the top of the high-pitched ceiling of the lobby. There they played as guests danced on the main floor far below. (Old Faithful Inn History)

The dining room is practically unchanged over 100 years later, even with the same hickory furniture built by the Old Hickory Furniture Company. 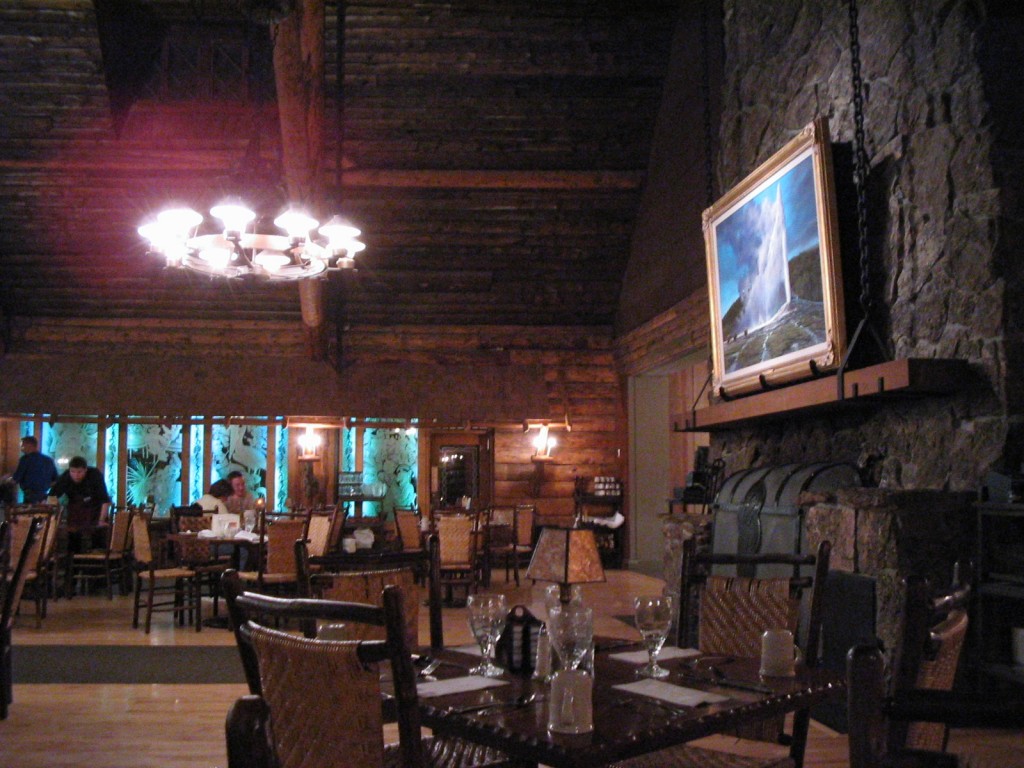 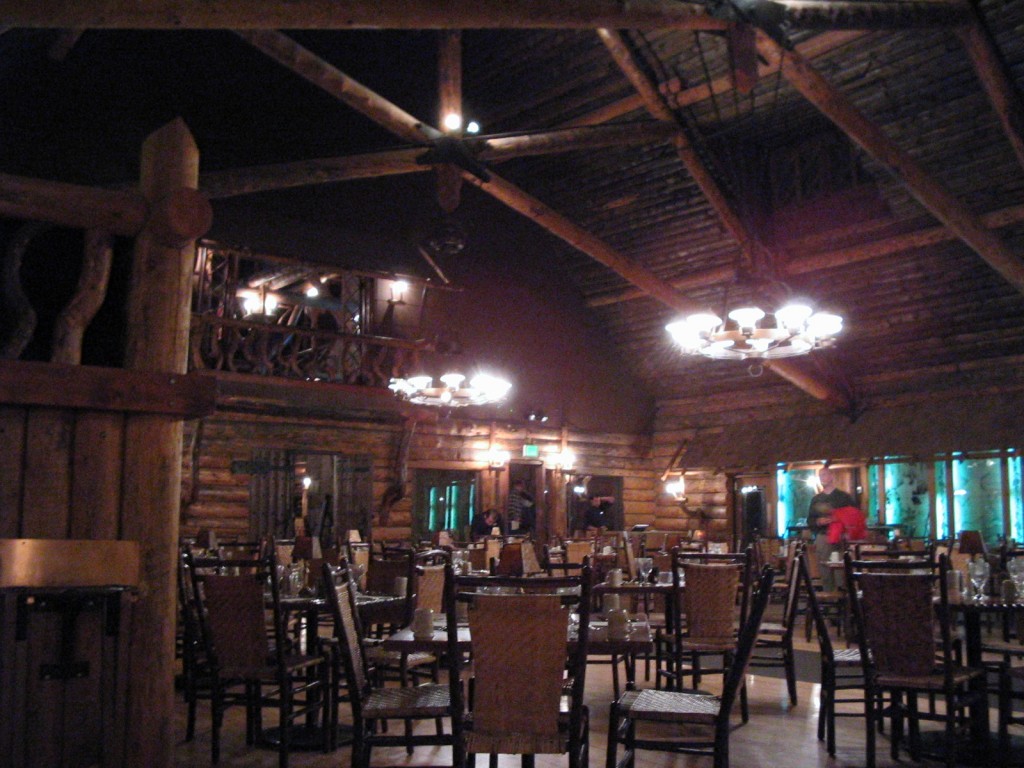 In 1922 the dining room was expanded into a second dining room with more windows but a lower ceiling, and decorated with carved, painted wood panels of animals and birds native to the area (still present but no longer painted).

In 1936, after the end of Prohibition, the Bear Pit cocktail lounge was built just off the lobby to quench the thirst of park visitors. The lounge featured wooden panels sandblasted with whimsical cartoons designed by staff cartoonists depicting bears engaging in human activities, such as one showing a bear spraying seltzer on some inebriated bears in a bar scene!

The Bear Pit lounge was converted into a coffee shop in 1962 and the cocktail lounge was relocated into an area next to the dining room. The comic wood panels were recreated in etched glass (visible in both the dining room and the cocktail lounge – see photos below). Some of the original wooden panels are now on display in the snack bar off the lobby. The furniture in the Bear Pit is all original from the 1930s. 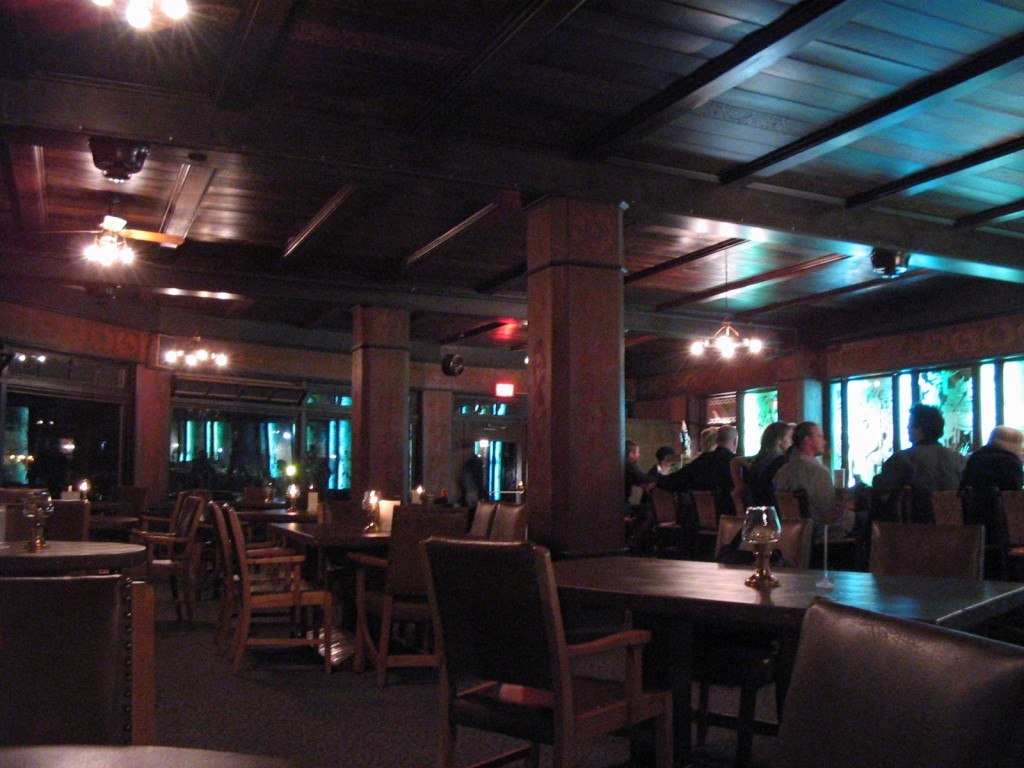 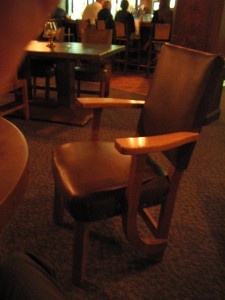 Now about the food. Based on my experiences in many National Parks (where food service is run by private concessionaires) the food costs more than comparable food would outside the park and ranges from downright bad to very good. But it just goes with the territory. Considering the setting and atmosphere you get what you pay for (average prices at the Old Faithful Inn Dining Room in 2012 were: Breakfast, $11; Lunch, $13; Dinner, $26). Lower your expectations, or camp and cook your own food. Also ask questions and order items that may be fresh or local. If they offer trout ask if it’s fresh from the area. Stick with classic American dishes. Don’t order Italian food (or Asian, Mexican, etc.). It won’t be as good as at your favorite neighborhood restaurant. Instead get a burger or a steak. In some parks you can drive outside the park to get better food. But even if the food isn’t that great in the lodges, just enjoy the atmosphere in the incredible rustic old dining room. I like to bring at least one dressy outfit on a visit to a historic lodge because it’s fun to get dressed up for dinner to enhance the time travel experience (just try not to look around at the other diners in their shorts and Teva sandals). 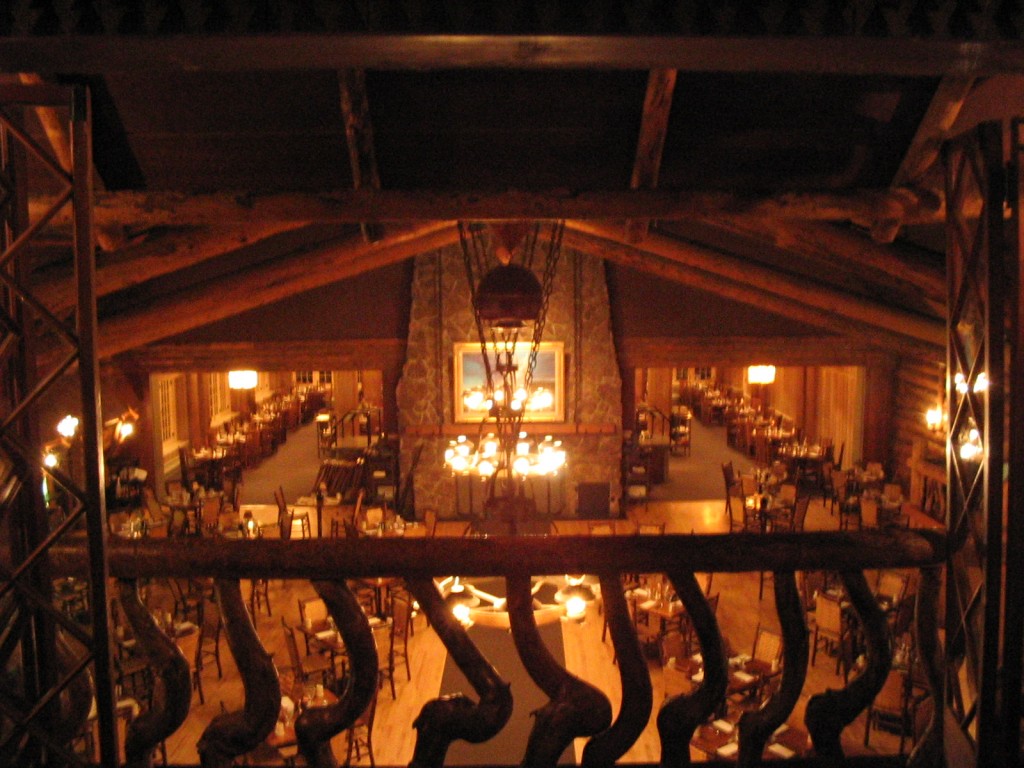 Old Faithful Inn dining room from the second-story balcony, photo by The Jab, 2003

In 1987 the Old Faithful Inn was designated a National Historic Landmark. The statement reads:

“The first building in a National Park constructed in an architectural style harmonious with the grandeur of the surrounding landscape. Reflects Adirondack Rustic architectural idiom, but blown up to enormous proportions. Its seven-story high log lobby is unique in American architecture. Created with gnarled logs and rough sawn wood for the Northern Pacific Railroad, it has a sense of place as identifiable as the Park itself.”