With the recent closure of Joe’s of Westlake for renovation, where does one go in Daly City? Val’s is the place! 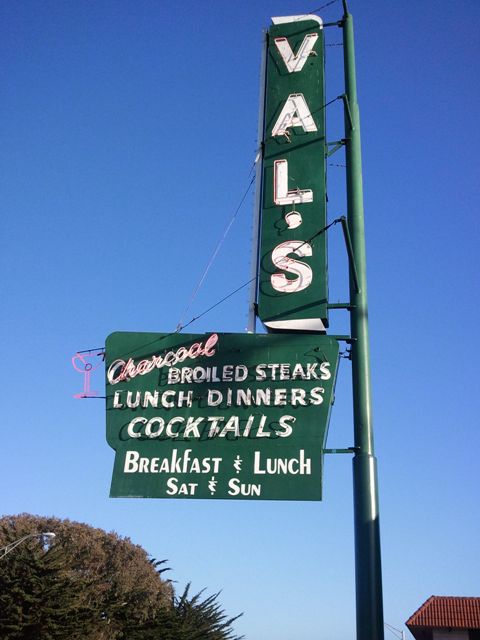 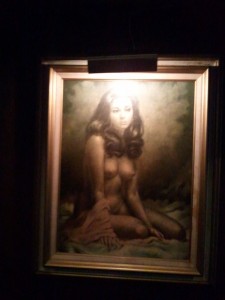 Val’s has a bar and lounge with some original Naugahyde bar stools and chairs and some vintage nudes on the walls, but unfortunately there are also several TVs in the room and there is karaoke in the bar after 9pm on Tuesdays, Fridays, and Saturdays (karaoke is not Le Continental’s cup of tea). However, the dining room is TV-free and looks mostly original still, with a lot of dark wood, Naugahyde booths, and oil paintings. The only fairly recent additions that I recall are the lamps and etched glass booth dividers, neither of which look too modern to detract much from the classic feel of the room. Does the nude look familiar? Yes, I’m pretty sure it’s by the same artist, Larry ‘Vincent’ Garrison, that painted the nudes in the cocktail lounge at Albie’s Beef Inn.

Val’s is a steakhouse (“charcoal broiled steaks” is right on the sign), offering a menu of prime rib and six cuts of steak, as well as lamb and veal. They also make southern fried chicken with a pressure fryer and they specialize in french dip, which is very popular and offered during lunch Mon-Fri and brunch on weekends. Pasta and seafood dishes round out the extensive menu. All dinners are reasonably priced; the steak dinners ranging from $20.95 for top sirloin to $27.95 for a 20 oz. porterhouse (subject to change), including potato and vegetable (steak prices drop below $20 during lunch and include soup or salad). I love their shoestring fries, much preferable with a steak than thick fries, in my opinion. I need to go back and try the rack of lamb – only $27.95 for a full one-pound rack! Their meat and bread are sourced locally, with their produce coming from California growers. If you want to see some delectable pictures of their food (better than I could ever take) check out their website. They are open for dinner early (4:00pm) and have early dinner specials (call for details). 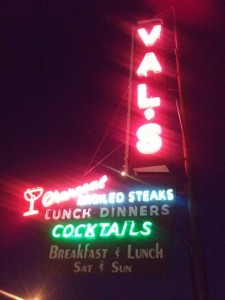 image by an inebriated Jab

Val’s is a true Bay Area local’s place, family owned for almost 40 years. The chef has been with the restaurant for 25 years; the bartender for 15 years. And many of their loyal customers have been going there far longer. Don’t you think it’s time you joined them?