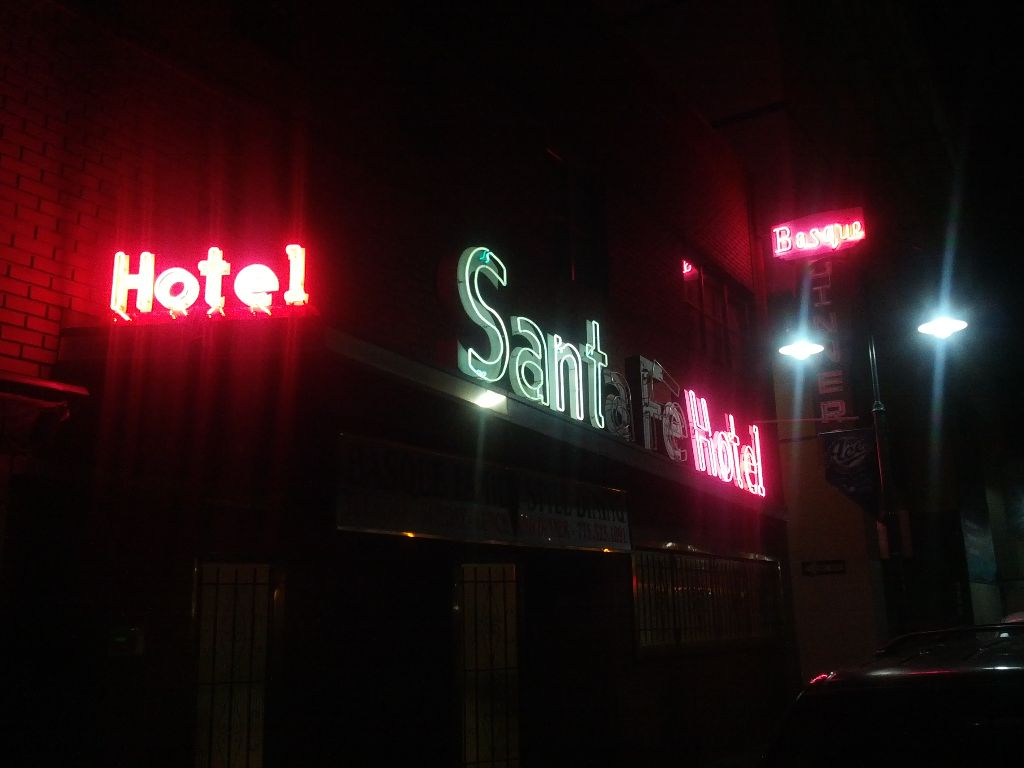 In the mid-19th century Gold Rush of California many people came from the Basque Country in the Pyrenees Mountains of Spain and France to strike it rich. It wasn’t easy to find gold so many became sheepherders, spreading throughout California and Nevada. Basque-operated boardinghouses were built to provide the hardworking men a hot meal and a room. At one time there were over 300 of these hotels. Quite a few returned home after earning enough money for passage so most of the hotels closed down. But a few survived and remain in operation today, still serving food and drink, but now to the public as well as to Basque families (I don’t think any still operate as hotels). The Basque hotel restaurants still exist in Fresno and Bakersfield in California, as well as in a few towns in Nevada. There are many Basque clubs and organizations that have preserved the cuisine of the Basque people in the western U.S., which is a hearty blend of rural cowboy cooking, traditional Basque foods, and homestyle American fare (lamb, beef, and pork, beans, potatoes, paella, oxtail stew, sweetbreads, Spanish style chorizo, pickled tongue, and other dishes). 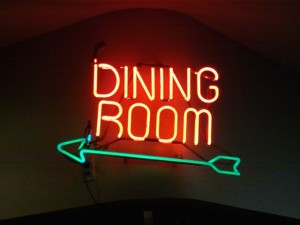 The Santa Fe Hotel (probably named after the Santa Fe Trail or perhaps the Santa Fe Railroad, which did not operate through Reno) reopened in 1948 after a fire and it has not changed much since that time. When you walk in there is a vintage Seeburg jukebox just inside the door on a floor of vintage linoleum that reads “Eskualdun Etchea” (Basque House), leading into a large front room with a long bar with a vintage cash register and a vintage phone behind the bar. Everyone orders the house Picon Punch (locals usually call it a ‘picon’), and you should too. It’s the Basque cocktail in the west, a bittersweet blend of Torani Amer (the western U.S. version of the French Amer Picon, unavailable in the states), grenadine, and soda water, topped with a float of brandy, usually served in a stemmed tulip-shaped glass. It sounds too sweet but actually it’s quite refreshing and appetite inducing. The bar slowly gets crowded with families and friends (it opens at 4pm) until 6:00, when the neon “Dining Room” sign is illuminated, which means that it’s time to sit down for dinner in the dining rooms. There are three of them, each filled with long tables with green checked tablecloths, vintage chairs, and art and bric-à-brac on the walls. It could still be 1948 in this place! 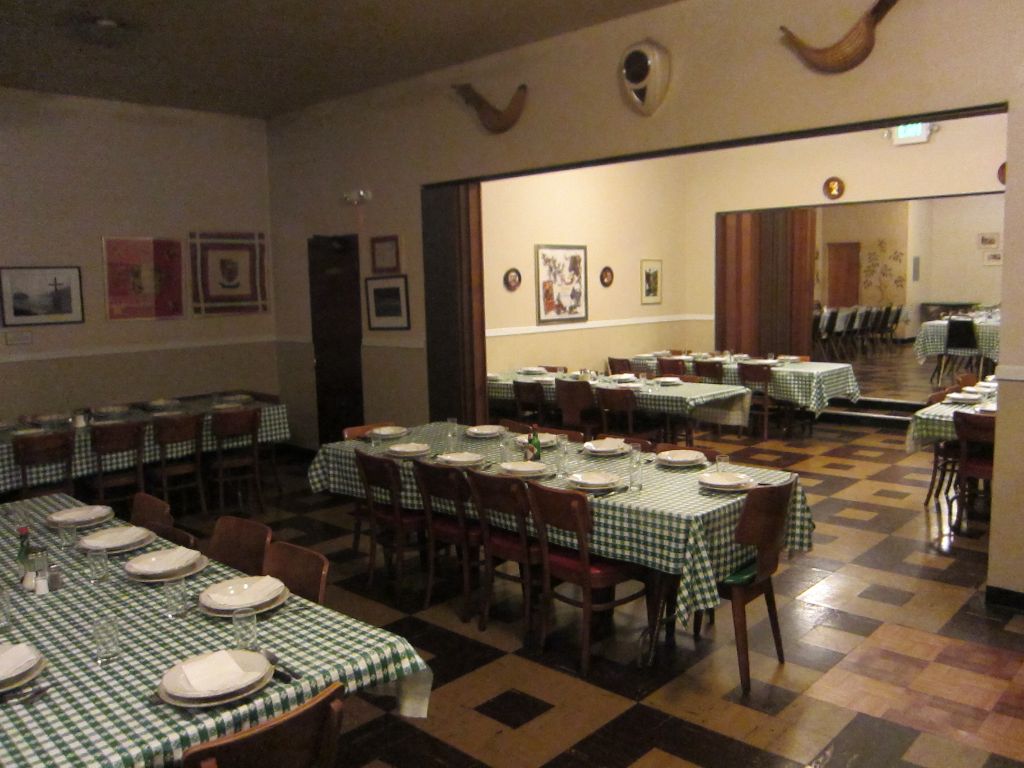 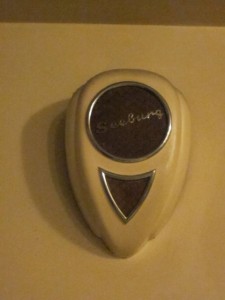 Diners sit at communal tables and the food is served family style (which is common to all classic Basque restaurants in California and Nevada), meaning each dish comes out in large bowls or on large platters except for your main course, which you order from the evening’s menu that varies day to day. I ordered the lamb chops, which were juicy and delectable. Other popular dishes at the Santa Fe are the ribeye steak, pork chops, oxtail stew, and lomo, breaded pork cutlets with mild peppers. Main dishes come with several sides, which on my visit included a delicious homemade soup, a salad with tangy Italian dressing, red Basque beans, terrific chorizo, french fries, and a large carafe of red wine. Dinner also includes coffee and ice cream or a good ‘hard’ cheese, with other desserts available.

Oh yeah, everything is served on vintage dinnerware! 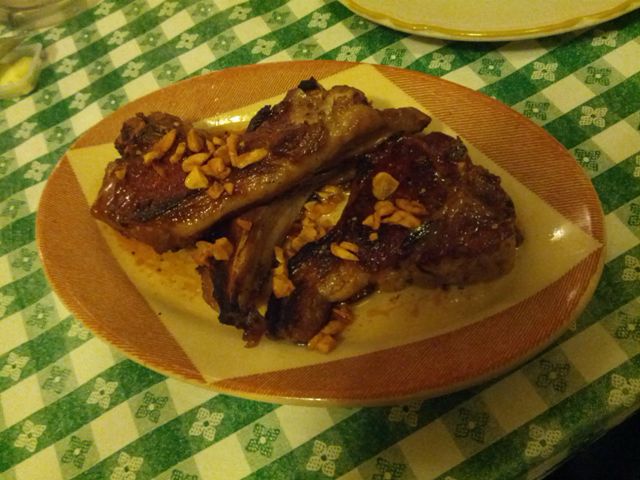 There is another Basque restaurant in Reno that is also popular – Louie’s Basque Corner, which opened in 1967. But the place has been totally remodeled into an industrial space with exposed brick and pipes in the bar, and not much better in the dining room. Furthermore, super annoying Food Network host Guy Fieri* has been there, so I’ll pass it by and head right for Santa Fe Basque, the only time travel Basque restaurant in Reno, with the best Basque food in town and friendly service too.

*[I don’t get it! Fieri’s show is called “Diners, Drive-Ins, and Dives” but Louie’s Basque Corner isn’t a diner, a drive-in, or a dive. In fact, there are very few actual diners (most on the east coast) or drive-ins left in the country. I have been to one real drive-in with car hops in Oshkosh, WI, and a few old drive-in A&W’s (some are now Sonics) – and we are not talking drive-through restaurants, but actual drive-ins that were popular in the 50s (and featured in American Graffiti). So are all the rest of the places he visits ‘dives’? Seems like a stretch to me. I don’t watch his show but he really needs a better name.]