In the Chicago suburb of Cicero, which lies between Oak Park (of Frank Lloyd Wright fame) and Midway airport, is the oldest operating Czechoslovakian restaurant in the U. S. The town became a Czech neighborhood in the 1920s as many Czechs took jobs in the Western Electric plant, but after the plant closed in the 1980s many Czech families moved away and the city is mostly Hispanic now. 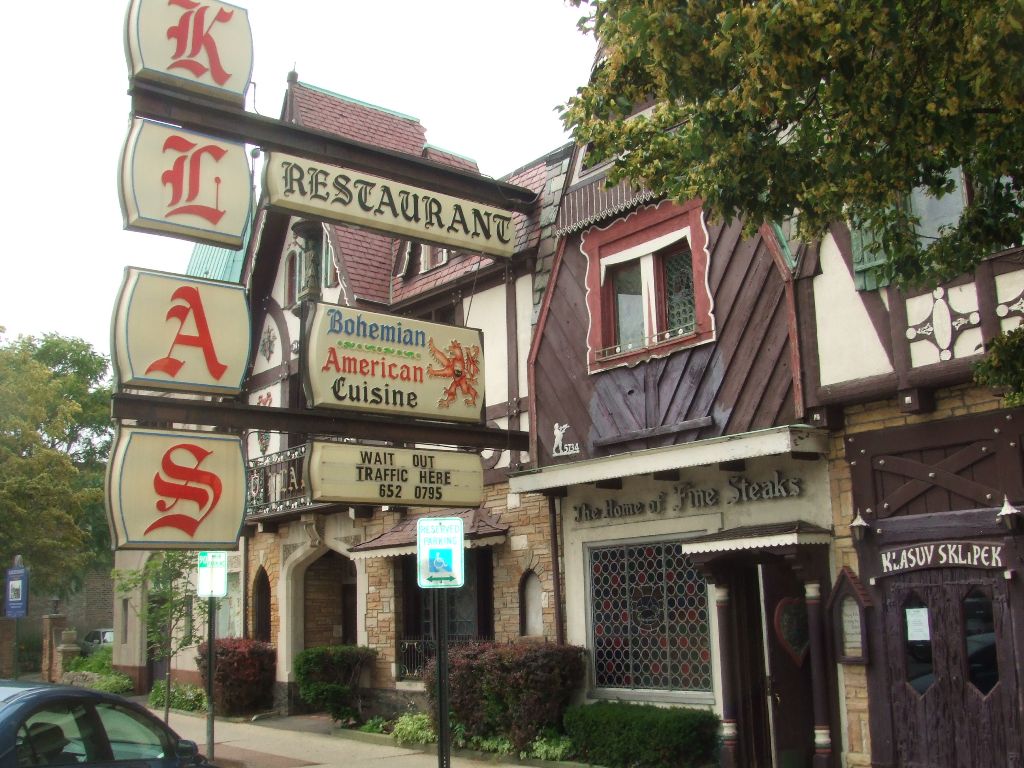 Klas was opened in 1922 by Adolph Klas, from Pilsen in Bohemia, on what is now Cermak Rd. (named after Anton Cermak, Chicago’s first Czech mayor). The street was once called the Bohemian Wall Street because of all the Czech business along the thoroughfare. 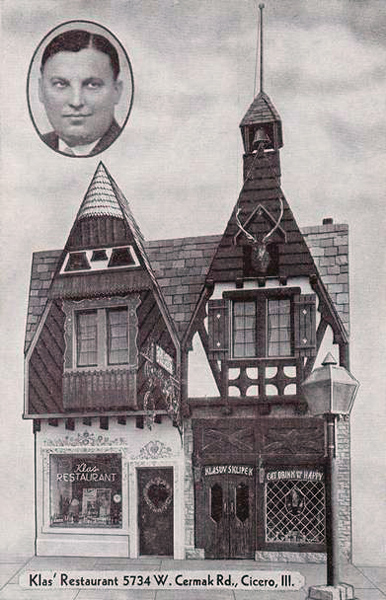 In the early days the restaurant was much smaller (as seen in above postcard). The wonderful rustic bar on the right, apparently an original 14th century tap room, which was reconstructed at Klas, is filled with carved wood monks, painted murals, and taxidermy. It is miraculously unchanged since it opened. 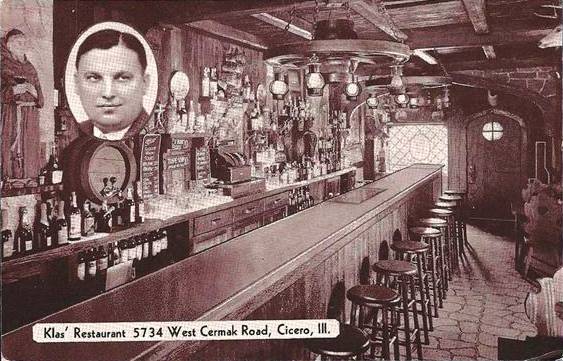 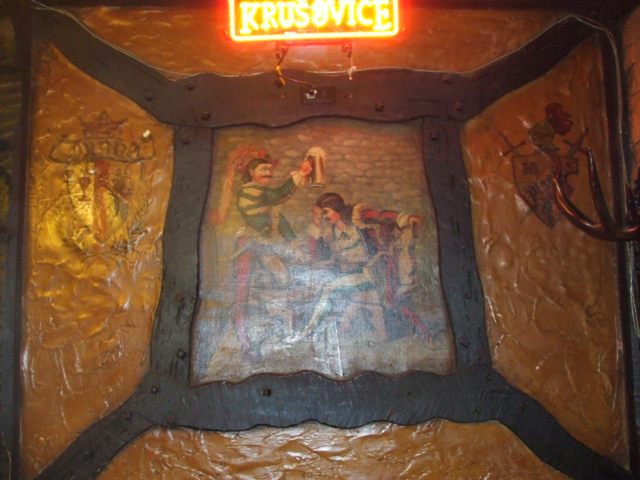 The other remaining part of the original restaurant is the room to the left of the bar, which served as the main dining room in the early days, which I believe is now the lobby (but I can’t recall exactly). 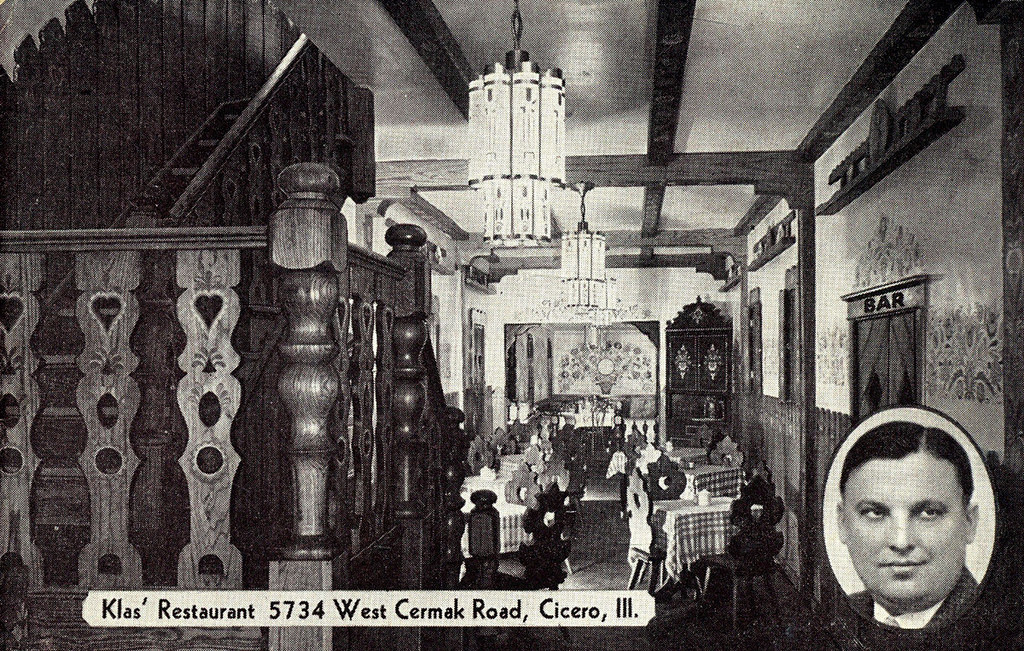 The restaurant expanded into its current configuration of the bar, main dining room, garden area, and banquet rooms, as seen in this linen postcard, most likely from the late 1930s or 1940s,… 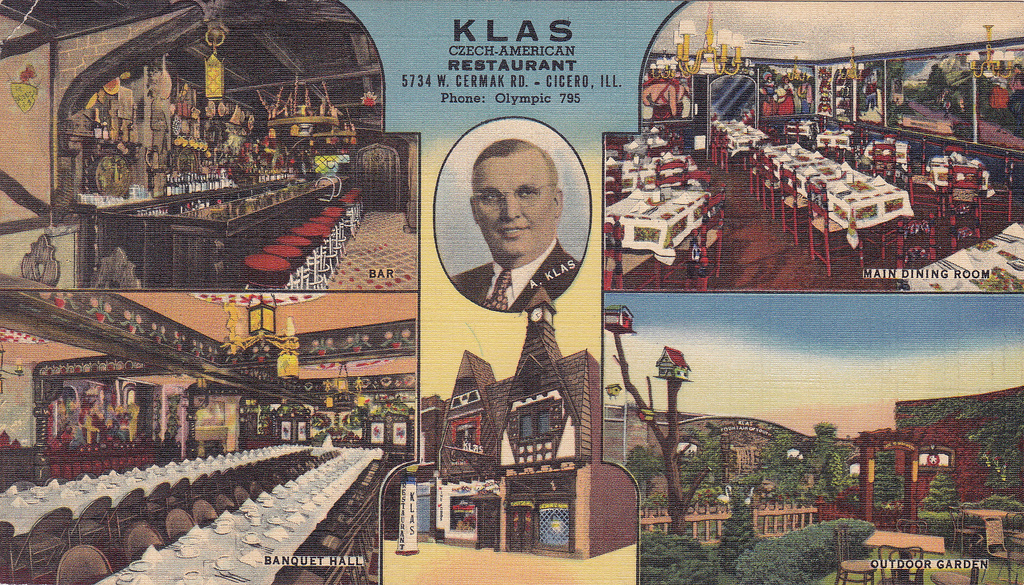 …and this postcard, from the 1950s, which shows how it looked on the outside. It hasn’t changed very much since then. 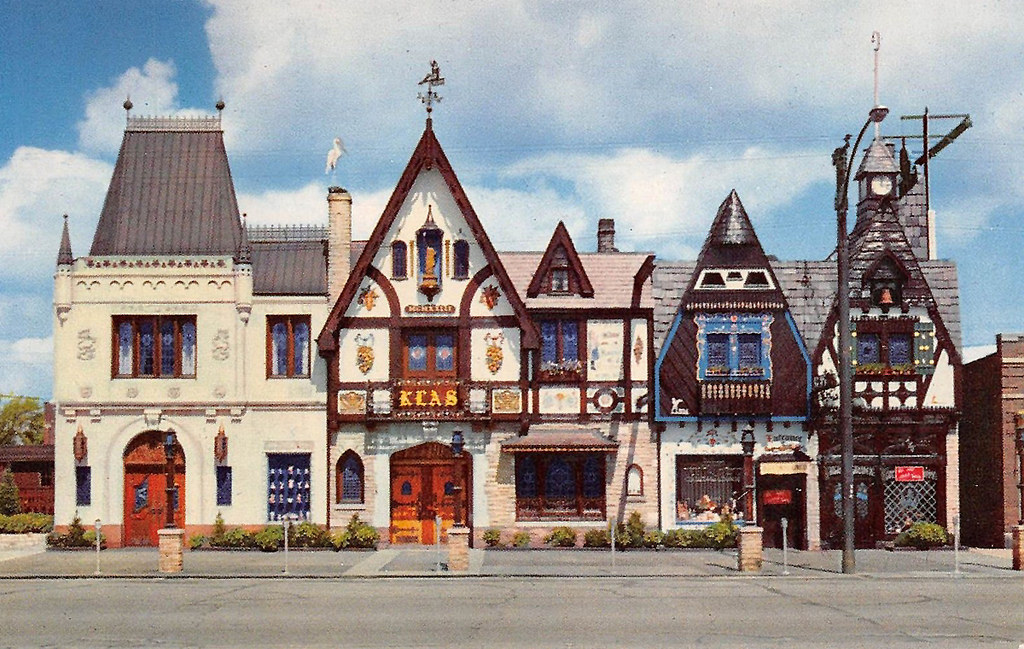 The buildings, inside and out, have loads of fascinating detail so make sure you allow plenty of time to linger before and after your meal. Notice the Statue of Liberty replica on the building’s façade in this photo (curiously the date on the building is 1923, while the restaurant claims to have opened in 1922). 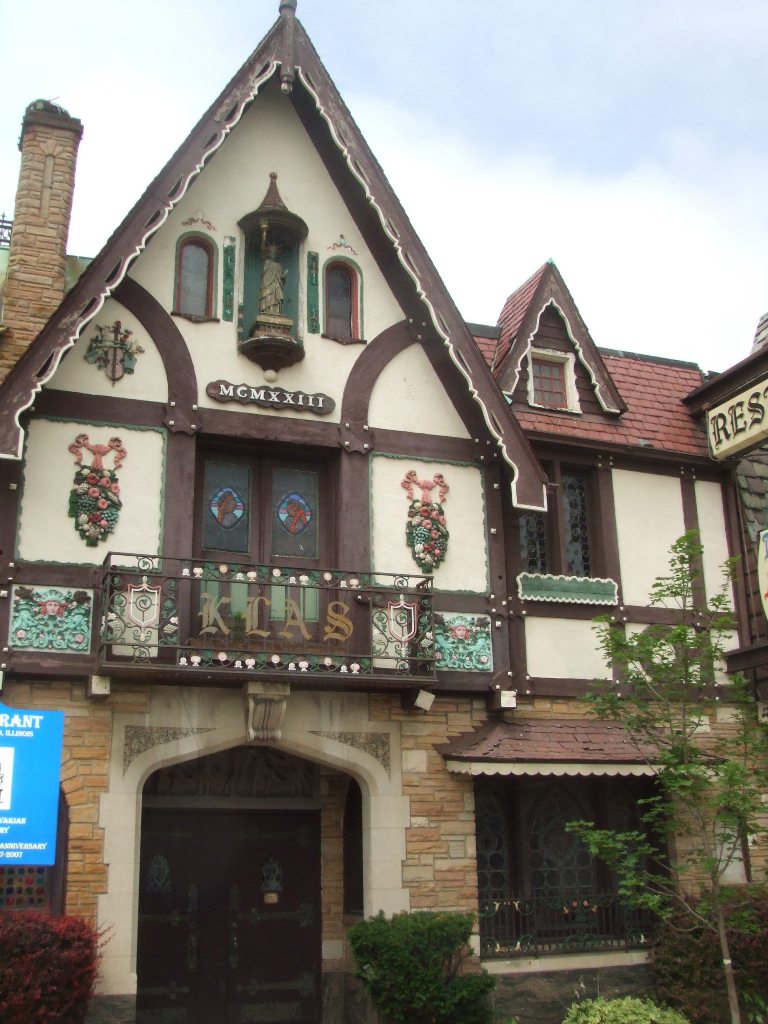 In 1962 Adolph Klas passed away. The restaurant was owned by various people until Frank Saballus, a former construction worker, bought it with his sister in 2003 to preserve this last bit of Czech-American culture in Cicero. Le Continental heartily thanks him for preserving such a wonderful restaurant! 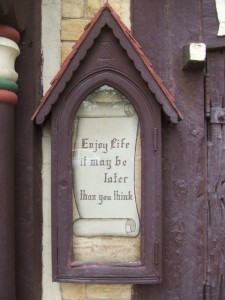 Good advice before you enter the restaurant! – photo by The Jab, 2010

On my visit in 2010 I dined in the main dining room, which is a huge, bright (in the daytime) room with lovely arched windows with bold striped canopies (Le Continental approves of stripes) overlooking the garden, and with framed art and taxidermy (also Le Continental approved) on the walls. 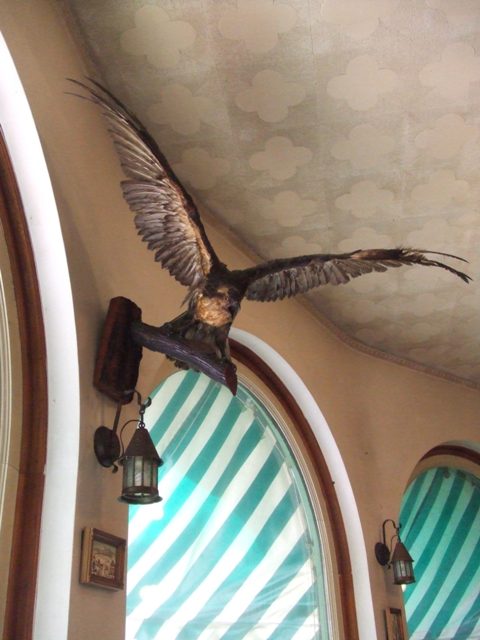 Klas’ menu is Bohemian. I did not know what that was when I went so I ordered a breaded pork tenderloin (schnitzel) dinner, which came with soup or salad, two “compliments” (I chose bread dumplings and sauerkraut), dessert, and coffee. As you can probably tell in the photo below (before I dumped gravy on everything) the food is homemade, including the bread. Other specialties include wiener schnitzel a la Holstein (topped with two fried eggs, anchovies, and capers), svichkova (pickled beef in sour cream gravy), koprova (boiled beef in dill gravy), roast duck, and smoked sausage. Dessert specialties include kolacky, fruit dumplings, and apple strudel. They offer some Czech beer including Pilsner Urquell, Radegast and Staropramen.

Make sure you tour the restaurant and ask to see the banquet rooms upstairs! 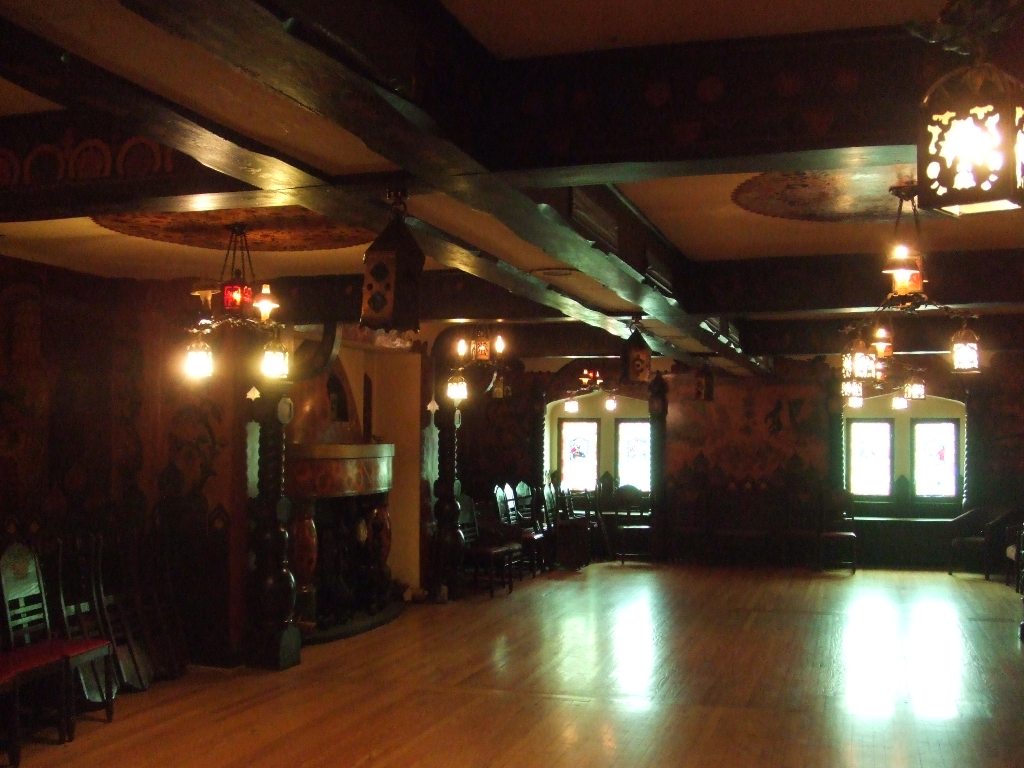 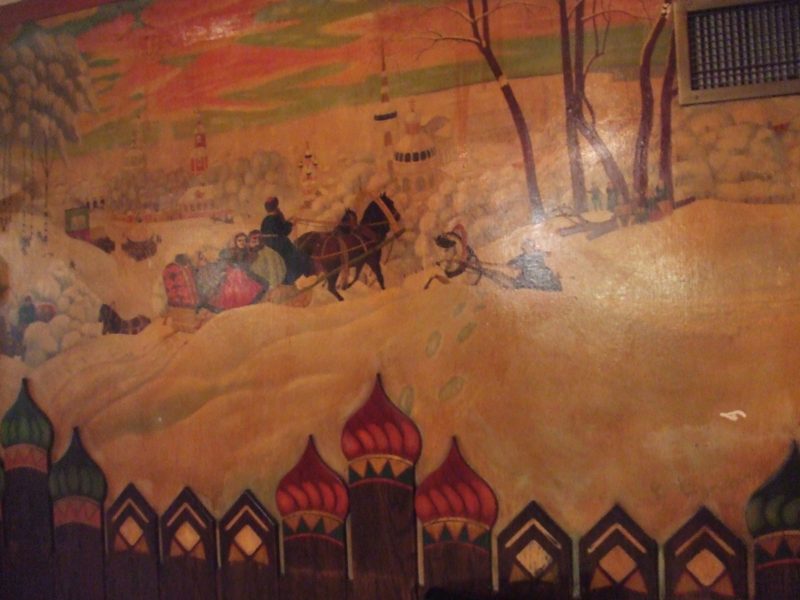 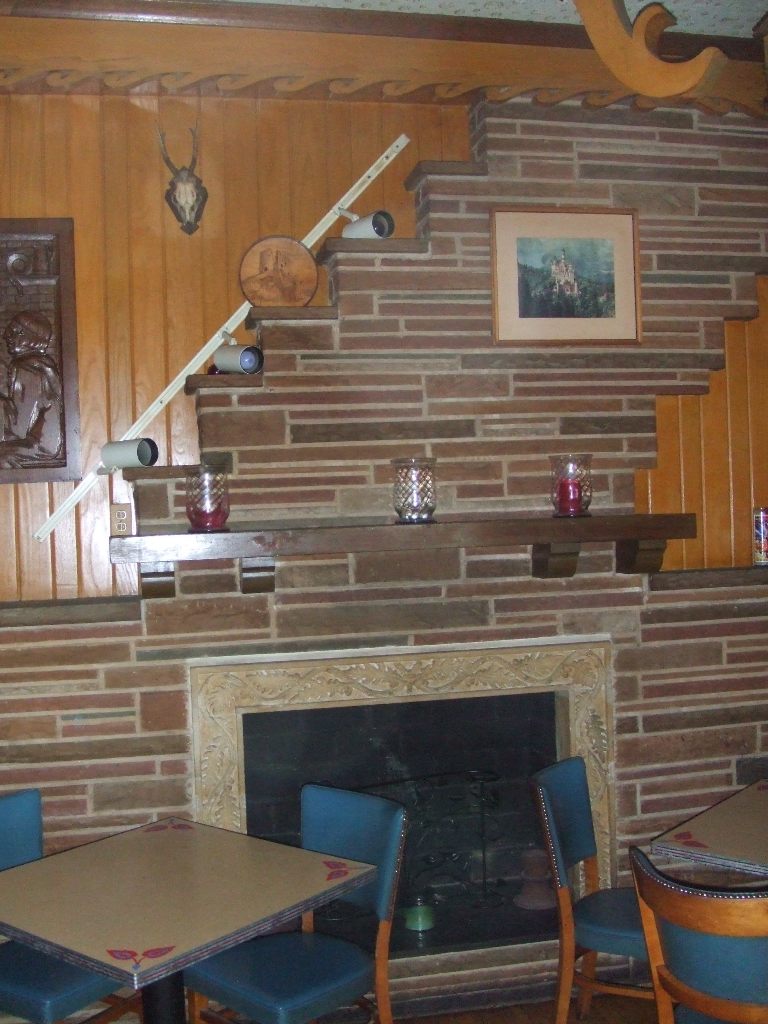 banquet room with original furniture! – photo by The Jab, 2010 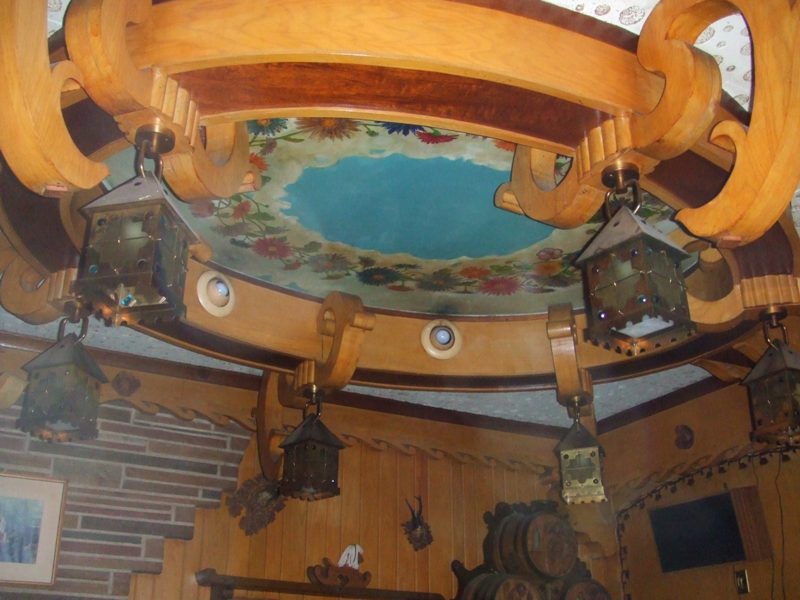 Klas is indeed the House of Happiness! Their motto (over the door) is “Eat, Drink, and Be Happy”!

WARNING: the areas surrounding Cicero may be somewhat sketchy so it is best to call and ask before venturing out for the best route to take. 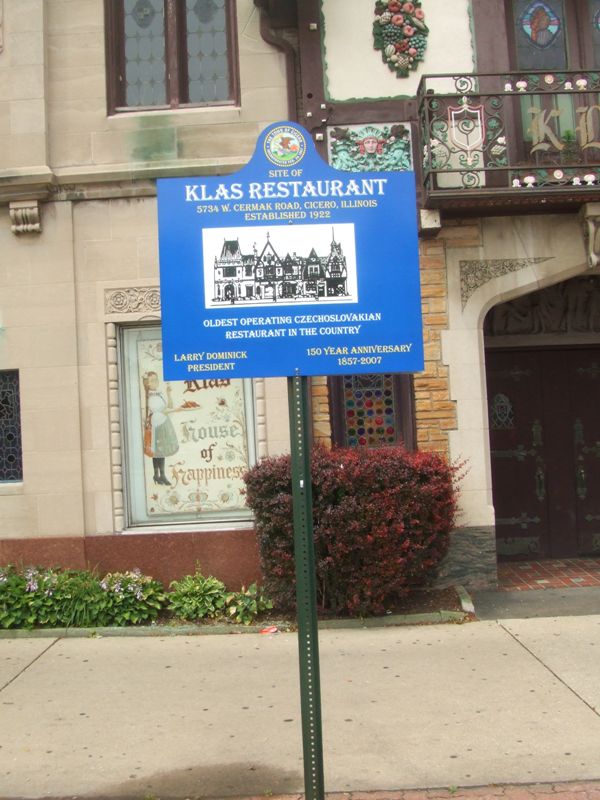