My favorite steakhouse in a city known for its steakhouses is Gene & Georgetti. It’s a winning combination of history, classic, never-remodeled decor, old-fashioned service, and prime, dry-aged beef. There may be better steaks in town (I don’t know), but I prefer eating a great steak in a classic steakhouse. 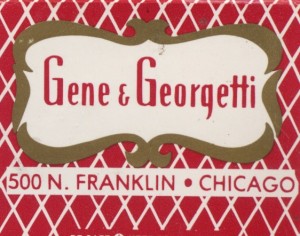 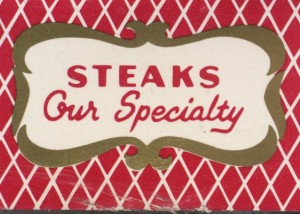 Gene & Georgetti was opened in 1941 by Gene Michelotti and Alfredo Federighi (aka ‘Georgetti’), taking over an Italian restaurant called Vic’s when the owner retired. In the beginning Alfredo was the chef and Gene the bartender. Gene’s welcoming personality led to it becoming a popular steakhouse with local movers-and-shakers, politicians, and celebrities such as Lucille Ball and Frank Sinatra. When Alfred passed in 1969, Gene became sole owner. That same year Gene’s daughter Marion married Tony Durpetti. When Gene died in 1989 Marion and Tony purchased the restaurant from Gene’s wife Ida, and they still own the restaurant today. Gene and Georgetti has been in the same family for 73 years. 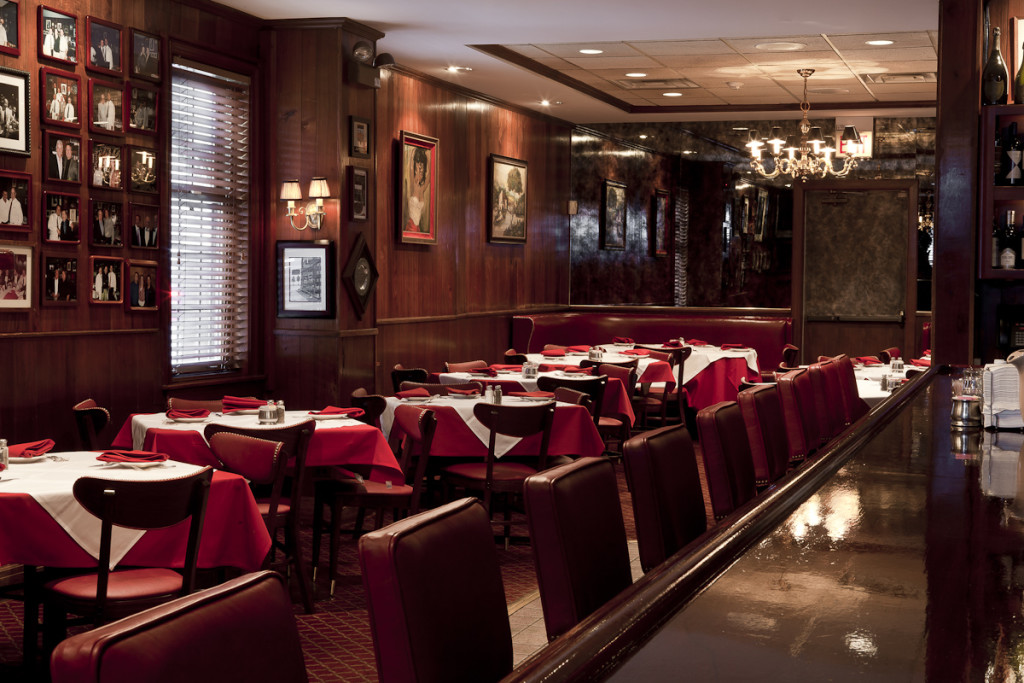 I love the atmosphere at Gene & Georgetti: dark wood paneling, red and white linen tablecloths, chairs with brass-tacked upholstery, chandeliers, art and photos of celebrities on the walls, Sinatra or Dino playing softly through the PA, and white-jacketed, no-nonsense waiters. 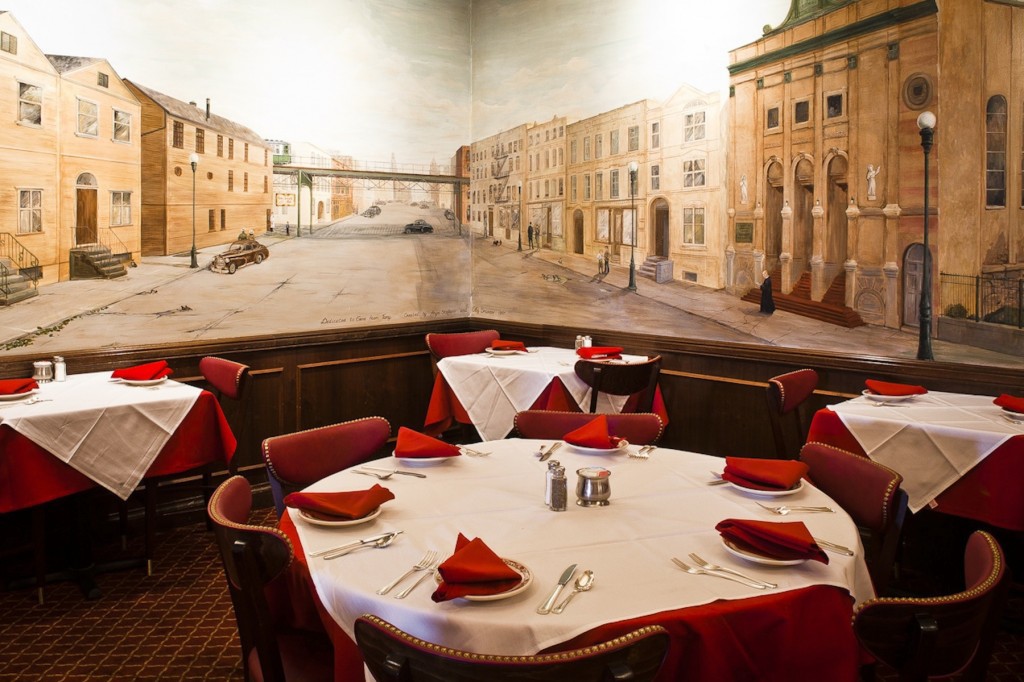 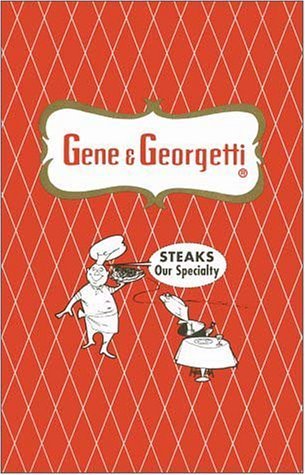 The menu (which is a vintage work of art) is classic Italian steakhouse, with a range of appetizers, pastas, steaks & chops, Italian specialties, and seafoood entrees. For an appetizer (or entree) I recommend shrimp DeJonghe, a Chicago specialty of garlicky breaded shrimp, which originated at DeJonghe’s Hotel & Restaurant around the turn of the century. The “Garbage Salad” is famous. It’s an antipasto style iceberg salad that is tossed with a house red wine vinaigrette with a large shrimp on top. As in many midwest eateries the dressing is liberally applied, so if you don’t like salads served that way you may want to order the dressing on the side. The photo below is of the iceberg house salad, not the garbage salad. 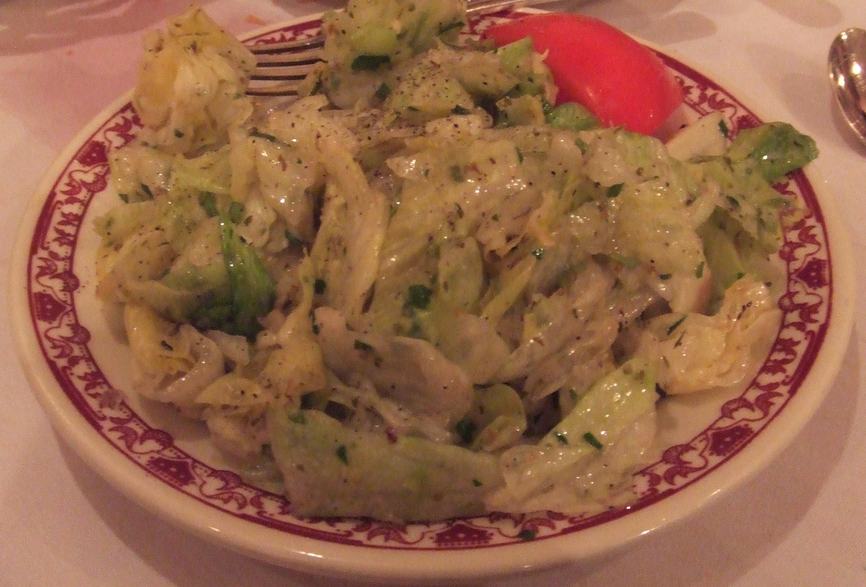 Broiled steaks come in four cuts: strip loin (New York), bone-in or boneless, T-bone, bone-in rib eye, and filet mignon, bone-in or boneless. The boneless strip loin and filet mignon come in two sizes. On previous visits I had a bone-in rib eye, which was very large, and excellent. On my visit in 2007 I had a bone-in strip loin. Steaks are priced typically for Chicago, but if you are on a budget they have many entrees under $30 and pastas under $20. They also offer lamb, pork, and veal chops. I love seeing Lyonnaise potatoes on the menu in the Midwest (and at a few West Coast restaurants). They are fried potato slices, like potato chips but thicker. 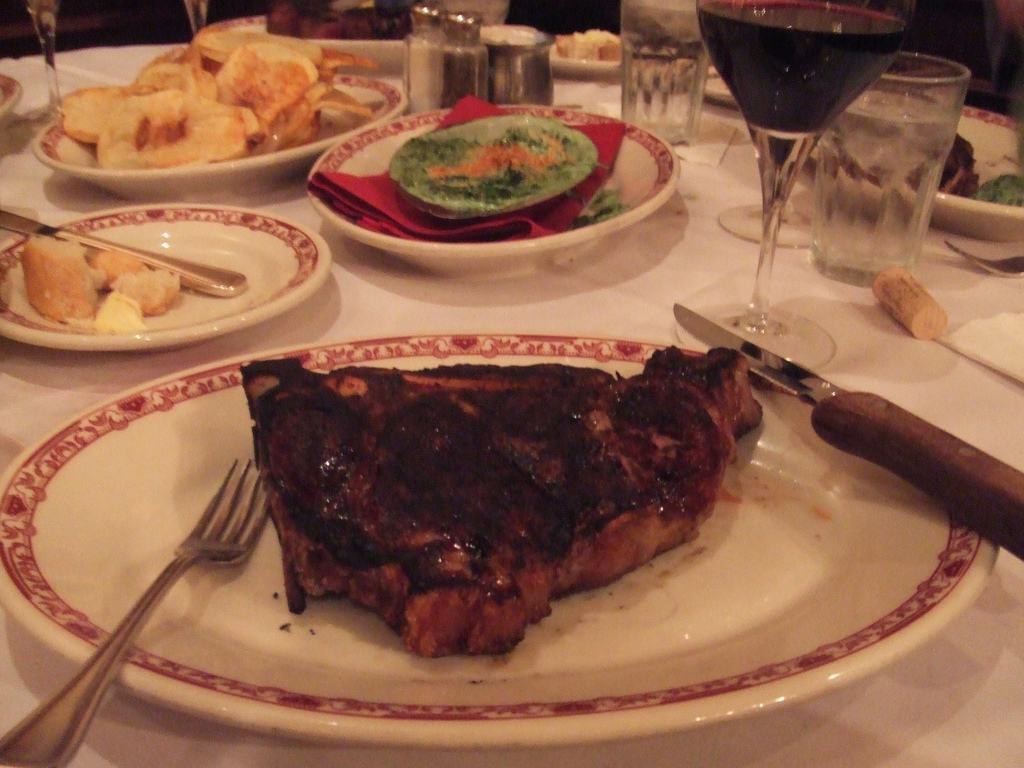 There are many Italian-American dishes on the menu such as veal, chicken, and eggplant parmigiana, veal scalloppine, veal and chicken marsala, and filet Florentine. But I recommend another Chicago specialty, chicken (or veal) Vesuvio, roasted chicken with garlic, olive oil, white wine, parsley, and oregano, served with a generous pile of roasted potatoes. Delicious!

The next time you’re in America’s best metropolis (in my opinion), stop in at Chicago’s finest steakhouse, under the El at Franklin and Illinois. Valet parking is complimentary.

Gentlemen, be sure to heed the credo posted in a frame over the bar: 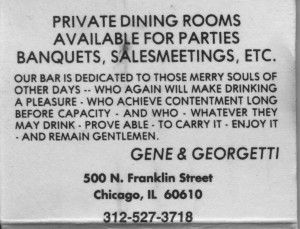 words to live by, framed and hanging over the bar at Gene & Georgetti