The Butcher Shop in the Kearny Mesa neighborhood of San Diego didn’t open until 1986 but its atmosphere and menu are definitely classic steak house, putting it in the list of San Diego’s old-fashioned steakhouses along with the Red Fox Room, Albie’s Beef Inn, Cafe La Maze, Turf Supper Club, and the Riviera Supper Club. 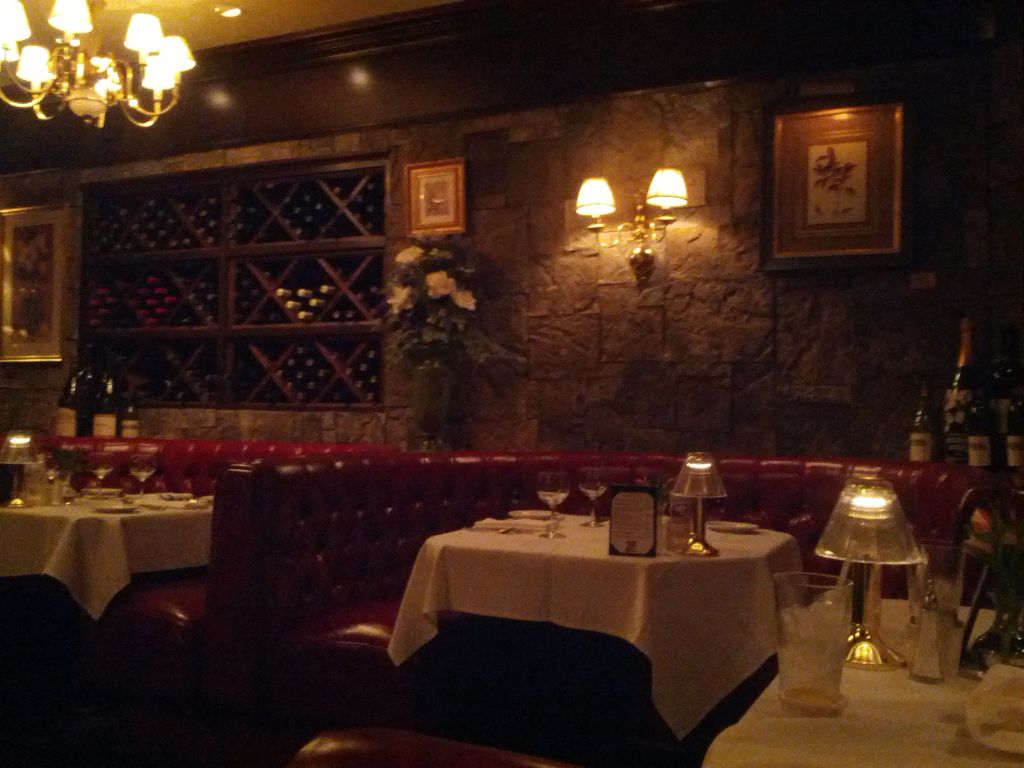 The Butcher Shop’s lineage starts decades before its opening, when Vincent De Philippis (from Italy) and his wife Madeleine Stefani (from France) moved to San Diego in 1950 from Philadelphia. That year they opened an Italian deli/grocery on India Street called Filippi’s Cash and Carry, which is still open today as Filippi’s Pizza Grotto. There are now 13 Filippi’s restaurants, mostly in San Diego County with one in Riverside County and one in Napa, CA, all owned by descendents of the De Philippis family. In 1968 Roberto De Philippis bought a Hawaiian restaurant in Chula Vista, CA, and turned it into a classic steak house with red tufted leatherette booths, red flocked wallpaper, and red tables, called The Butcher Shop. I visited the restaurant a few years back but I can’t find my photos so here is one I found online.

A unique feature of the Chula Vista Butcher Shop was the waitresses uniforms, which included miniskirts and fishnet stockings. Roberto sold the restaurant in 2008 and it’s now called The Steak House. Apparently the new owners have kept the decor pretty much intact but I have yet to visit and see for myself. In 1972 Roberto De Philippi opened a second Butcher Shop steakhouse in Mission Valley, which he closed in 1986 to re-open as The Butcher Shop in Kearny Mesa. He operated the restaurant until the late 1990s when he sold it to the current owners, the International Aero Club LLC, who were allowed to keep the name. They also own the popular San Diego outpost of the 94th Aero Squadron, which is a 1970s WWI-aviation themed restaurant chain with a few locations left in the US (Van Nuys, CA, Miami, FL, and Columbus, OH). 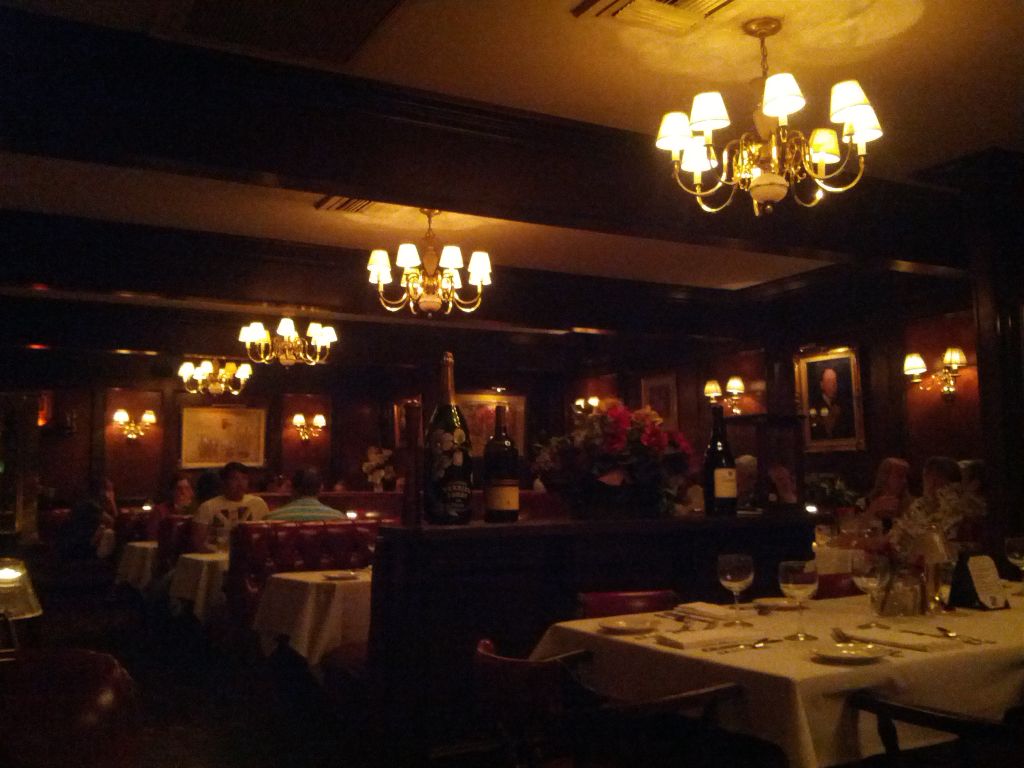 As you can see by my photos the restaurant is somewhat dark, just how Le Continental likes it, with red tufted leatherette booths like the Chula Vista location but more swanky and elegant with white linen tablecloths, chandeliers, vases of fresh flowers, and many framed artworks and portraits of movie stars on the walls. I especially liked the corner booth in the fireplace dining room with the framed 1950s photo of Dean Martin – I’ll be sure to ask for that booth the next time I visit. 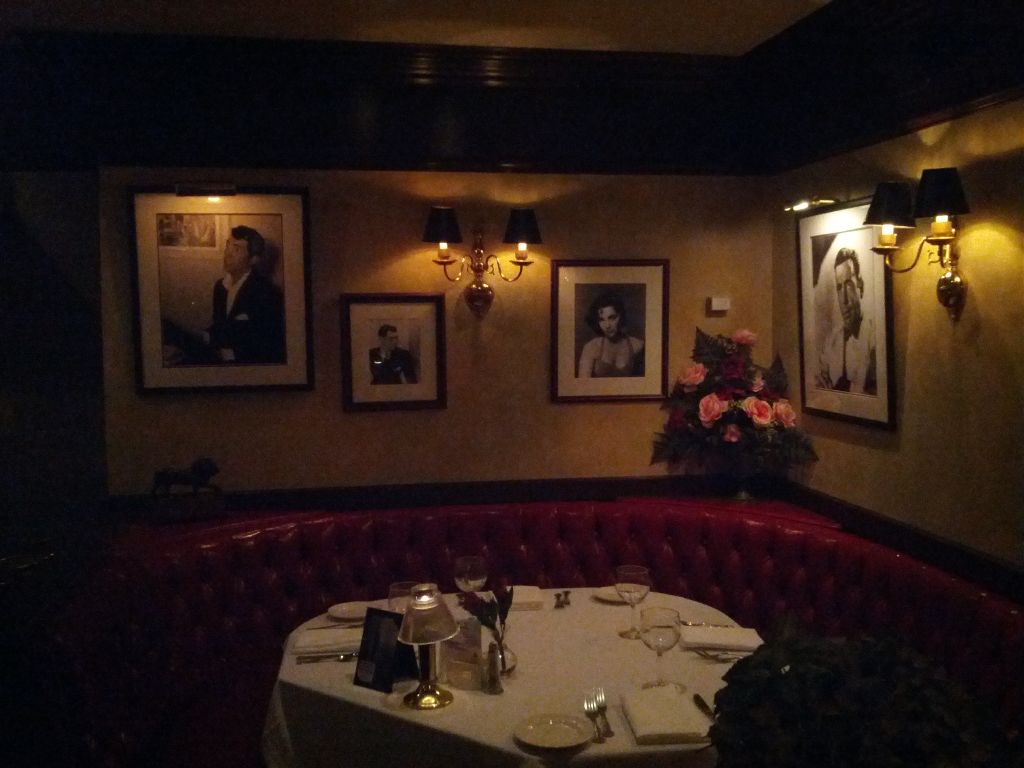 The menu features grain-fed Midwestern beef, aged at least 21 days, and broiled over mesquite. Most of the steaks offered are high quality USDA Choice (basically a rating of the age of the beef and the amount and type of fat marbling the steak has) but they also offer a USDA Prime top sirloin, which is one of Le Continental’s favorite cuts in good steakhouses for its beefy flavor, tenderness, and leanness. So that’s what I ordered. I was quite pleased with the flavorful char, the thickness of the steak, its flavor and tenderness. A couple of small areas were a bit too black but I just trimmed those parts off because they tend to taste bitter (and supposedly they are not very healthy). The restaurant specializes in Prime Rib, which seems to be quite popular according to online reviews. The menu also has a few veal, poultry, and seafood dishes, mostly in classic preparations such as veal Oscar, veal piccata, and chicken scaloppini. The early bird specials, called Sunset Dinners, from 4:00pm-6:00pm 7 days a week seem to be popular with the senior set ($15.99).