I recently heard some good news about the reopening of 101-year-old Oyster Bar in Grand Central Terminal after a long restoration. The renovation started after its centennial last year, one room at a time, and the restaurant was closed earlier this year to redo the kitchen. The signature tiled arched ceilings were restored by replacing damaged tiles with painstakingly reproduced ones that match perfectly with the original tiles from 1913 that remained. 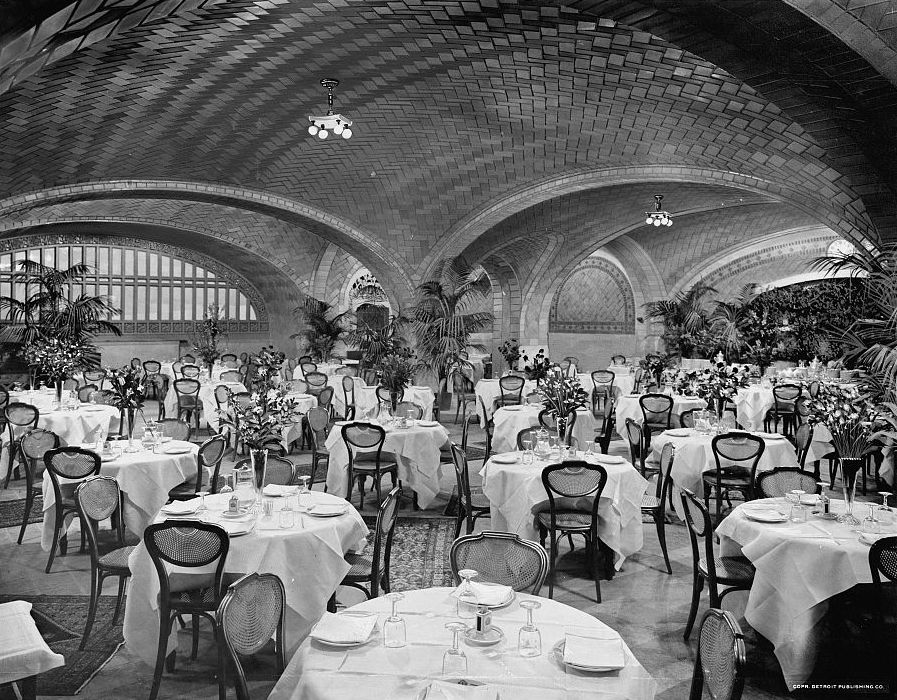 The Grand Central Terminal Restaurant and Oyster Bar was opened by the Union News Company in 1913, only two weeks after the magnificent Beaux-Arts Grand Central Terminal opened (a terminal is a railroad station that is at the end of a railroad line; when Grand Central opened it was the terminus of the New York Central Railroad’s line into Manhattan). Beautifully designed by architect Raphael Gustavino, for many years it was not primarily a seafood restaurant, but instead served a varied menu of dishes popular at the time. However, from the start it always had a popular oyster bar which featured a selection of raw oysters and the popular oyster stews and pan roasts. The restaurant catered to all walks of life, from the rich and famous traveling in style, who may have eaten in the main dining room (see picture above), to the average train traveler or commuter, who may have eaten at the more casual lunch counters, the oyster bar, or in the saloon in the back of the restaurant. Remarkably, all the different rooms are still in use and are now restored to how they probably looked in 1974, when the restaurant reopened after closing due to lack of business caused by the decline of long distance train travel in the U.S. 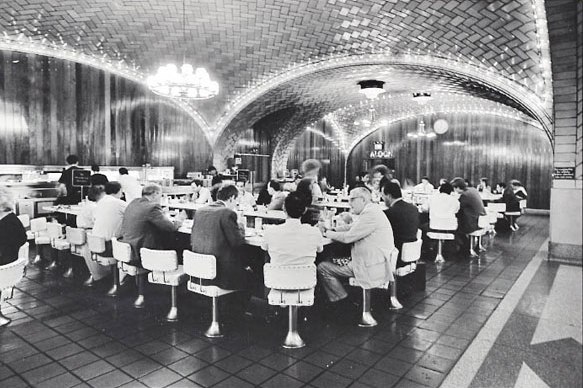 Starting in the 1950s Grand Central was threatened with demolition for new high-rise buildings, a battle which lasted until it was designated a New York City Landmark in 1967 and a National Historic Landmark in 1975 (Jackie Kennedy Onassis was instrumental in saving it). When I was a teenager in the 1970s a fascination with trains since childhood and my wanderlust prompted me to take two cross-country train trips from San Diego on early Amtrak trains that were still running vintage, streamliner-era rail cars acquired from the railroads when Amtrak took over most passenger trains in 1971. Train travel was pretty cheap then so I could afford private roomettes on some trains, but I didn’t mind spending a night or two in coach at that young age (and the long distance coach cars then had tons of leg room and reclined nearly flat). I arrived in New York City by train in the mid-1970s at Penn Station and after my visit I departed out of Grand Central Terminal to Chicago on the Lake Shore Limited (the Hudson River route of the famous 20th Century Limited; Amtrak stopped using Grand Central in 1991). I remember exploring the worn out and nearly empty Grand Central that day and how depressing yet fascinating as a time-warp it was.

In 1974 the restaurant closed so the Metropolitan Transit Authority approached Jerome Brody, president of Restaurant Associates, Inc. (owners of many of the finest restaurants in NYC, including the Four Seasons, The Forum of the Twelve Caesars, The Rainbow Room, and La Fonda del Sol), to take over the space. The restaurant quickly reopened (in 1974) with a seafood-focused menu and a new logo (pic at right) but thankfully with the same appearance. It struggled for two decades until 1997, when there was a fire which nearly destroyed the restaurant. Many of the tiles and most of the equipment were damaged but it reopened just in time for the completion in 1998 of a four-year restoration of Grand Central Terminal. In 1999, I visited the Terminal and restaurant (my first visit) on a trip to NYC for a family reunion to celebrate my grandparents’ 90th birthdays (they were both born on the same date). I had heard about the Oyster Bar in Jane and Michael Stern’s 1997 book Eat Your Way Across The U.S.A. During my visit I also took the fascinating Grand Central neighborhood walking tour, which happens every Friday, is free, and is highly recommended by Le Continental. 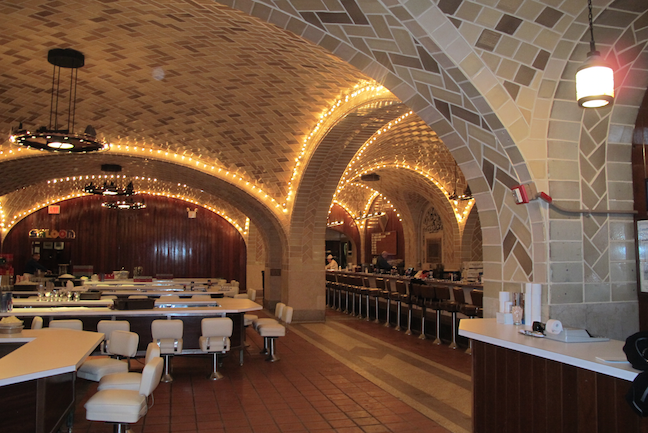 Now that the recent restoration is complete I can’t wait to return, have a pan roast (a must for first time visitors), and some fresh, raw oysters! 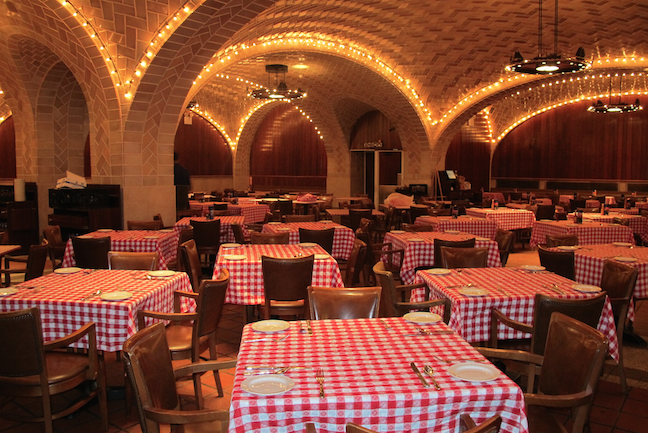 For further reading about the Grand Central Oyster Bar’s history, I recommend the articles on the wonderful I Ride The Harlem Line blog and on Eater.com’s Living Legends feature.