One of the most beautiful modernist restaurants in the country, Canlis still retains many features from its original late 40s design by architectural firms Wimberly & Cook and
Tucker, Shields & Terry for restaurateur Peter Canlis (who had previously opened the Canlis’ Charcoal Broiler in Waikiki, Hawaii, in 1947). Opened in 1950, Canlis’ Charcoal Broiler (now just Canlis) in Seattle was the ultimate in swank, with a soaring roofline, rock walls, and a porte-cochère, de rigueur in the 1950s for arriving in style in your Cadillac. postcard by hmdavid on Flickr.com

At one time there was even a small illuminated tiki to greet you as you drove up, and other tikis in the restaurant and on the grounds. 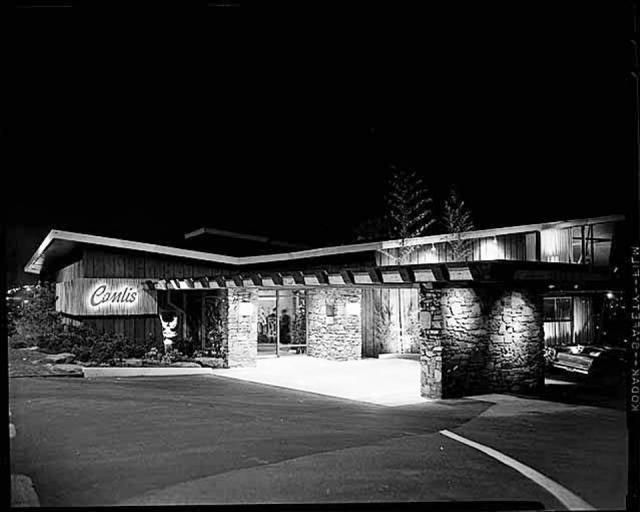 In the late 1990s I visited Canlis. Although I was impressed by the building, the contemporary decor from a 1996 remodel didn’t go well with the modern design of the building. We were on a budget which didn’t allow for dining there (it was perhaps the most expensive restaurant in Seattle), so we just had a cocktail in the lounge and vowed to return another time for dinner. Alas, it was before digital cameras so I don’t have pictures. The good news is that a few years later they remodeled again and the redesign is much more appropriate for the space. The decor is simple, highlighting the incredible rock walls, wooden beams, and expansive windows. They honor the amazing building by showcasing a vintage photo and a recent one on the restaurant’s web site. It’s still owned by the Canlis family, who seem to really care about their history, food, service, and customers. Reports are that the food (Pacific Northwest cuisine) is better than ever, though still very expensive, so save your money for a special night out “old style” when you are visiting Seattle. Oh, be warned: there is a dress code. Gents, wear a jacket (but why not wear a suit and tie?); ladies, wear a dress. Personally, I love that they still have a dress code.