Who makes the best fried chicken in the U.S.? In 2006 I thought I found the answer when I ate at the original Gus’s in Mason, TN, outside Memphis (since 1973). I love Gus’s spicy, crispy skin (the chicken soaks overnight in spicy batter and is cooked in custom cast iron fryers) so I will go back again. I only hope their expansion into 14 locations in 8 states hasn’t hurt the quality.

Now I’m not so sure if Gus’s is still the best, after having recently been to Stroud’s in Kansas City! 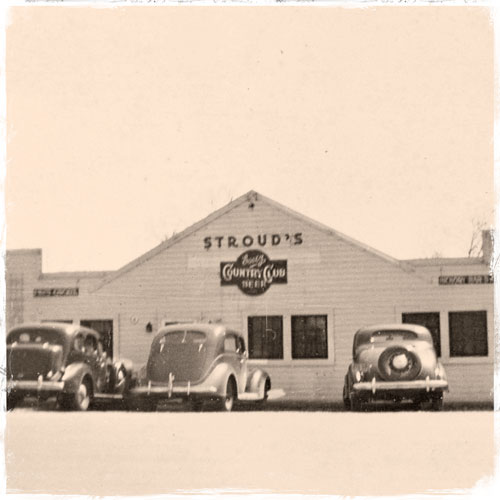 In 1933 when Prohibition ended Guy and Helen Stroud opened a bar-be-que shack at 85th Ave. and Troost St. in Kansas City. In WWII beef was hard to get so Helen Stroud started making pan-fried chicken dinners, which sold for 35 cents. The roadhouse’s popularity grew and grew until 1977, when Mike Donegan and Jim Hogan, 2 young bartenders at Kelly’s Westport Inn (the oldest bar in town), bought Stroud’s. In 1983 the partners, along with Mike’s brother Dennis, bought Sandy’s Oak Ridge Manor, a German – American restaurant in a historic house in north Kansas City for a second Stroud’s location, often called Stroud’s North. A third location opened in Wichita, Kansas, in 1992. 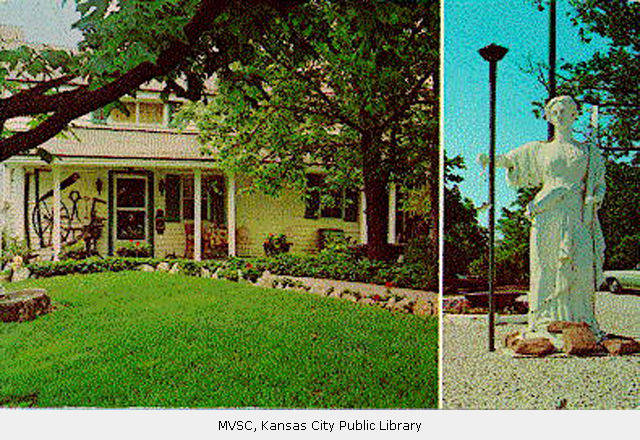 The original roadhouse location, with its creaky wood floors and piano players, sadly closed in 2006 for the widening of 85th Street, relocating into a new building in Fairway, Kansas in 2008 (go here to see some of the signage from the original Stroud’s). In 2013 the KC Hopps restaurant group partnered with Mike Donegan to open the newest Stroud’s in Overland Park, Kansas in 2014. Jim Hogan sold his share in 2000 and Dennis Donegan passed away in 2004, but Mike Donegan continues to run Stroud’s, keeping the same home style food, friendly service, and old-fashioned country atmosphere in all Stroud’s locations. 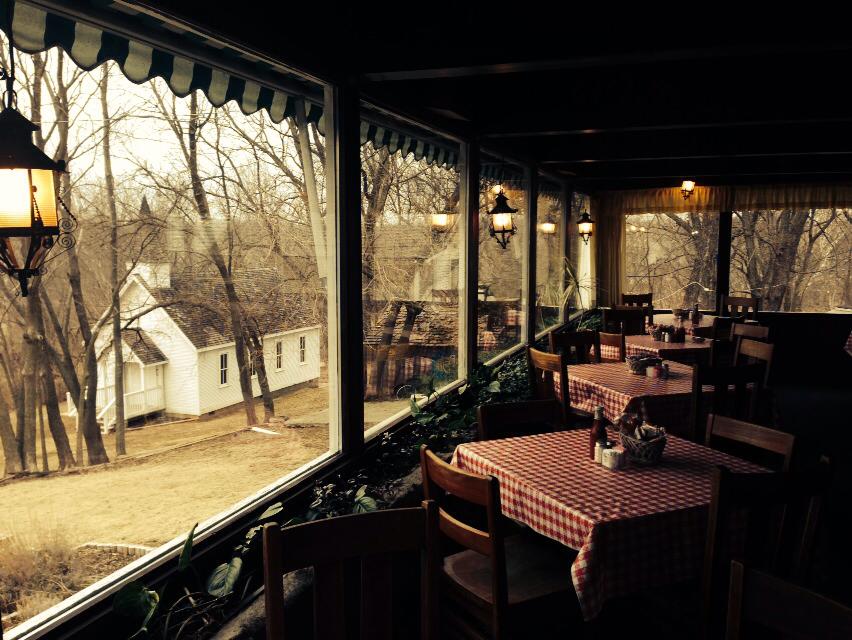 On my recent visit I chose the Stroud’s North Oak Ridge Manor location over the other restaurants because it’s the oldest Stroud’s location and because of the building’s history  (the building was listed on the National Register of Historic Sites in 1979). Originally a two-room log cabin built by homesteader David Hale in 1829, the cabin was bought in 1844 by Dr. James Howard Compton, who expanded it into a 10-room house for his growing family and often gave lavish parties for their large extended family and circle of friends (when you enter the foyer of the restaurant today you can see that you are in the original cabin). In 1954 Darwin and Louise Sandstrom purchased the large home from the Compton family, opening a German – American restaurant called Sandy’s Oak Ridge Manor in the house. On the grounds of the restaurant was the statue Justice (see postcard above) from the 1859 Clay County Courthouse, which was salvaged when the courthouse was razed (now on display at the Clay County Museum). In 1983 the restaurant became Stroud’s second location. 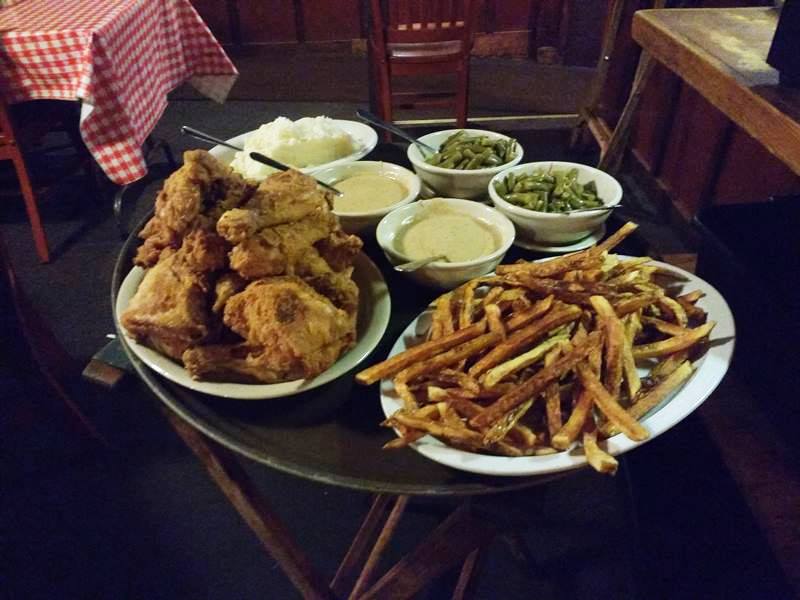 fried chicken dinner with all the fixin’s – photo by Dean Curtis, 2016 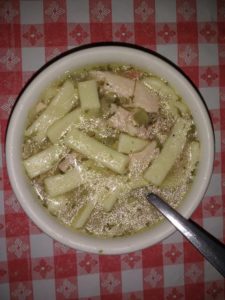 The fried chicken is simply coated with flour, salt, pepper, and paprika and fried in skillets by hand, which Stroud’s says makes for the juiciest chicken (and provides drippings for their excellent cream gravy). I couldn’t agree more. I’m usually a dark meat man, but I had a breast and found it very juicy and tender. Delicious! 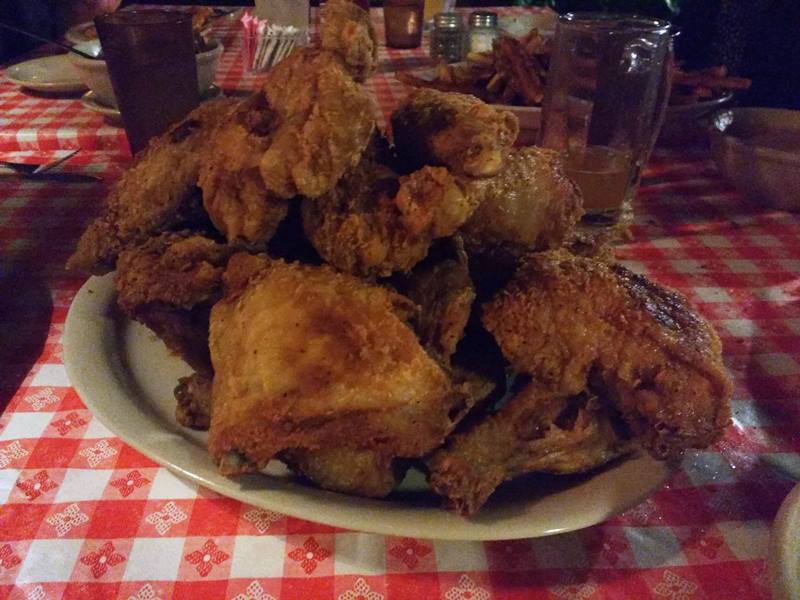 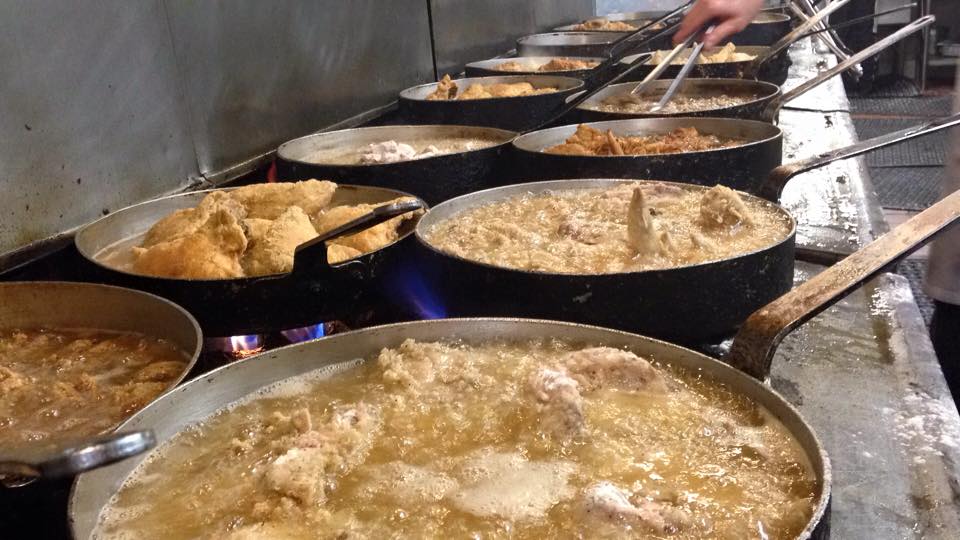 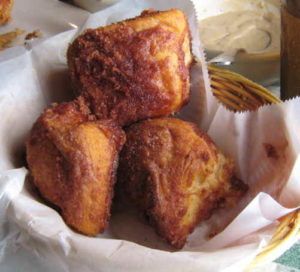 We loved their dark brown french fries and mashed potatoes with gravy, but those cinnamon rolls are out-of-this-world! They are not exactly like traditional cinnamon rolls which are rolled up, cut and baked. These are more like big, fluffy, sweet dinner rolls with a coating of sweet cinnamon goodness and pockets of gooey melted cinnamon-sugar-butter. Best served hot at the restaurant but take some home for breakfast too!

Stroud’s is a recipient of the James Beard Award for Excellence in the “Home Style” category, the first restaurant to win in that category.