On my first visit to Portland (that started my love affair with the city) in the 1990s the first place I remember eating at was Jake’s Famous Crawfish. We stayed in the venerable Mark Spencer Hotel, only a block from Jake’s, so when we saw their neon sign we knew where we wanted to eat (without the help of smart phones or online reviews). 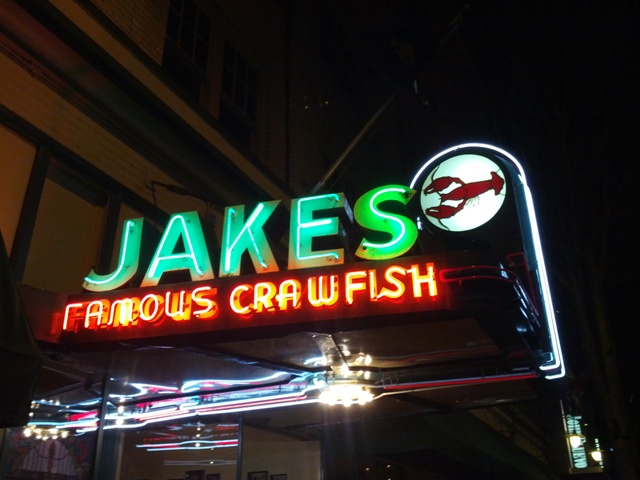 We were very pleased with the food, atmosphere, and service. As I recall our veteran waiter was from San Francisco, where he had worked at the Blue Fox until it closed in 1993 (now Alfred’s Steakhouse). Since then I found out that Jake’s is owned by a large chain, McCormick & Schmick’s, and I also learned that it’s mainly a tourist place that few locals visit, with so many other better choices in the food scene in Portland in the last ten years. But it will always have a place in my heart, as a warm & comfortable historic landmark that serves great fresh local seafood (if one orders with savvy). image by Citroendork on Flickr.com

Jake’s Famous Crawfish opened in its current location in 1911 in the Whitney & Gray Building (1910), making it Portland’s second oldest restaurant, after Huber’s, which dates back to 1895 using my guidelines. It opened as a saloon that served crawfish called Mueller and Meier, which had existed in a previous location since 1892.. In 1913 the name changed to the Mueller and Meier Cafe, staying open through Prohibition by switching to soft drink service. In 1920 the restaurant was purchased by Jacob “Jake” Frieman, a popular waiter in a local crawfish restaurant called Quelle, who was responsible for the restaurant’s good reputation as a seafood house (and I assume when it started being called Jake’s). The restaurant went through several ownership changes until 1972, when it was purchased by William “Bill” McCormick, who hired Doug Schmick as his manager. The pair would later form the restaurant corporation McCormick and Schmick’s. As you enter Jake’s you come to the hostess stand. On your left is the bar (the back bar was shipped around Cape Horn in 1880), where seating is unreserved so it is a good backup plan if there is a long wait for the dining rooms (and there often is). The room is fine for dining with wooden tables and chairs in front of large windows overlooking the street and full menu table service by a waiter. But if you want a more formal dining experience you may prefer to eat in the dining room on surrounded by dark woods and oil paintings of Northwest scenes, lit by chandeliers that date back to 1881. The menu changes daily and features listed at the top various fresh Northwest seafood specialties of the day, including several oyster varieties (all have location of origin). When crawfish is in season during the months of May through September do not miss their crawfish specialties. Among the scads of seafood dishes they have a few steak and other meat dishes. On my most recent visit I had grilled steelhead (an anadromous – spawns in freshwater after living in the ocean – rainbow trout) from Washington. It was moist, tender, and perfectly cooked, served in a basil-butter sauce. The prices are pretty high, as in all quality seafood restaurants in the west (not like in Florida, where super fresh seafood can be inexpensive).

But as in most restaurants and bars in Portland there is a bargain happy hour every day of the week, and late at night on Friday and Saturday! Another reason I love Portland: happy hours are long, usually every day, and offer better deals than in the Bay Area (where $1 off drinks from 5pm-6pm M-F is the norm – big whoop). Bars have to serve food in Portland so it’s a great town for drinking but not getting too loaded!