On the occasion of Le Continental’s second anniversary I took a couple of weeks off, but I’m back with my first restaurant post of Le Continental’s third year. Thank you for reading, commenting, and especially for visiting the fine establishments I’ve included on these pages.

Recently I was looking at photos from my 2008 visit to Colorado and remembering a wonderful meal I had at The Tavern steakhouse in the historic Broadmoor Hotel in Colorado Springs, so I thought I would look up the restaurant and see what its current status is. I was happy to find that the Tavern is still there, but saddened to hear that they remodeled the amazing Mayan Room only this year. Here is a photo I took of the Mayan Room during my visit. The Broadmoor Hotel was opened by Spencer Penrose from Philadelphia in 1918 at a cost of two million dollars. It was designed by the New York architecture firm Warren and Wetmore, designers of New York City’s Grand Central Station, Ritz-Carlton, and Biltmore hotels. The grounds were designed by the Olmstead Brothers, who designed Central Park.

The Tavern restaurant (opening date unknown) was remodeled in 1939 and still has many of the original architectural elements on the ceiling and walls. As far as I was able to find out online, it has not been remodeled in this year’s renovations.

Tavern at the Broadmoor – Image by WineryExplorers.com bottle chandelier – image by The Jab

There are some interesting details at the Tavern, like the lighting fixtures made from old bottles. Spencer Penrose was strongly against Prohibition, so he purchased and stored large quantities of liquors and wines before the law went into effect. In 1933 when Prohibition ended he moved his stockpiles to the hotel. Many bottles from his collection, some quite rare, are on display in the restaurant and in adjacent hallways. Or perhaps some 1955 Cristal Champagne?

When the Tavern was renovated in 1939 the Tavern Lanai was built next to it, probably in a Hawaiian motif. Hawaii was popular destination for Spencer and his wife Julie so it became a popular theme at the hotel in the late 1930s. in 1938 the Lanai suites were added in the back of the hotel and in 1939 the Hawaiian Village rooftop garden and nightclub opened with live Hawaiian entertainment.

In 1953 the Tavern Lani was enclosed and remodeled into a mid-century modern version of a an ancient Mayan temple, called the Mayan Room, and the patio at the tavern was enclosed to become the Garden Room, which had plants, trees, and a fountain with two live flamingos! The flamingos occasionally leaped on tables with dining patrons so they had to be moved to the hotel’s zoo (yes, it even had a zoo!). Both of these rooms have been remodeled this year.

The Mayan Room before 2013 remodel – image by ForbesTravelGuide.com

In 1961 the hotel expanded greatly by building a nine-story south tower, crowned with the elegant Penrose Room, which is still open and has been a AAA five-star restaurant since 1977. Jackets are still required for gentlemen diners. 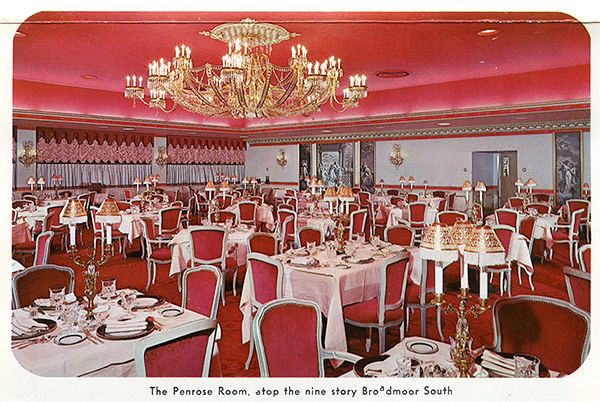 Also in 1961, the modern conference center called the International Center was opened, which included the Golden Bee, an original turn-of-the-century English pub that was in storage in NYC for many years until it was shipped to the Broadmoor and reconstructed. 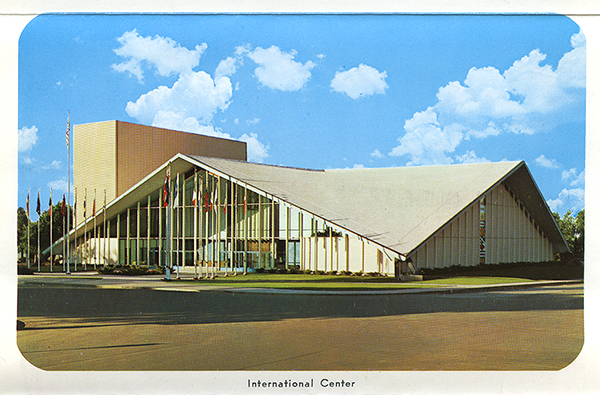 The Golden Bee was most likely relocated because on my last visit there was no International Center anymore, but the pub was still there with all of its hand carved mahogany woodwork. Just last spring it was enlarged and renovated, but from the pictures it looks like it still has much of the original decor and a ragtime piano player still performs.

Even if you can’t afford to stay at the very expensive hotel, it’s very much a worthwhile visit to walk the grounds and have a meal at The Tavern, Penrose Room, or the Golden Bee, which all still retain much of their classic decor and atmosphere. And there are many fabulous nearby attractions to visit, particularly the cog railway to Pikes Peak (once operated by the Broadmoor), Garden of the Gods, and the town of Manitou Springs for its vintage arcade and small town charm. Yours truly enjoying a 16-ounce t-bone steak and a Manhattan in the Tavern, 2008 – note the mini silver ice bucket to keep the rest of your cocktail chilled, a touch I really appreciate! –  image by The Jab