Enough of the downer posts! We are primarily here to celebrate existing restaurants, not to mourn lost ones (or closing ones).

A couple of years ago I wrote a blog post for my friends at Herb Lester and Associates, a small London company that makes wonderful, compact fold-out map guides of cities around the world. Every one is a work of art and the writing is superb. All of the maps are highly recommended, and they also sell some fine travel accessories. You can buy some of them locally (at Flight 001 stores) or them order direct (usually a less expensive option when buying multiple maps – they even sell bundled sets of maps on the web site). The post I wrote for them was about San Francisco’s three classic grills. What is a grill, anyway? I am pretty sure it is a restaurant where meat or fish is grilled over charcoal (sometimes also called char-broiling). But in this case, I picked these restaurants because they all are called grills, not necessarily because they all cook the food on a charcoal grill (many places, like all the Joe’s in the Bay Area, cook this way but are not called grills). Perhaps the grill became popular in San Francisco in the 1940s when the Lazzari Fuel Company of San Francisco started importing mesquite charcoal for cooking. Anyway, here’s the post (with some changes and more photos).

Tadich Grill promotes itself as San Francisco’s oldest continuously running restaurant, which is a stretch if you look at its convoluted history. Moving back in time, the present location dates back to 1967, when it relocated from 545 Clay Street because Wells Fargo Bank, owners of the building, decided to redevelop the site. John Tadich, an immigrant from Croatia, originally opened the Clay Street restaurant as Tadich Grill, the Original Cold Day Restaurant, in 1912. He sold it to the current owners, the Buich family, in 1929. 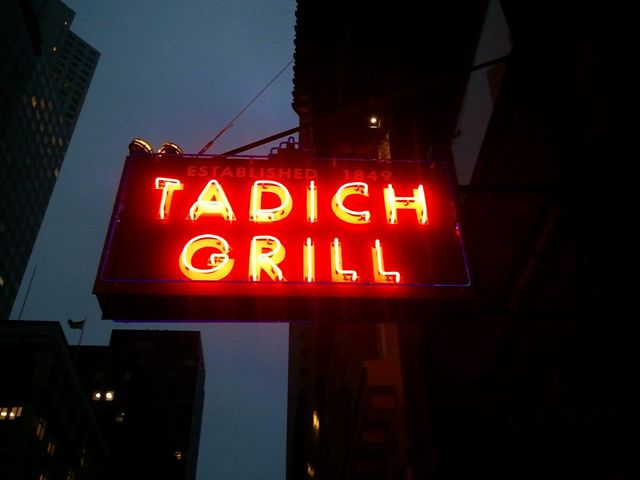 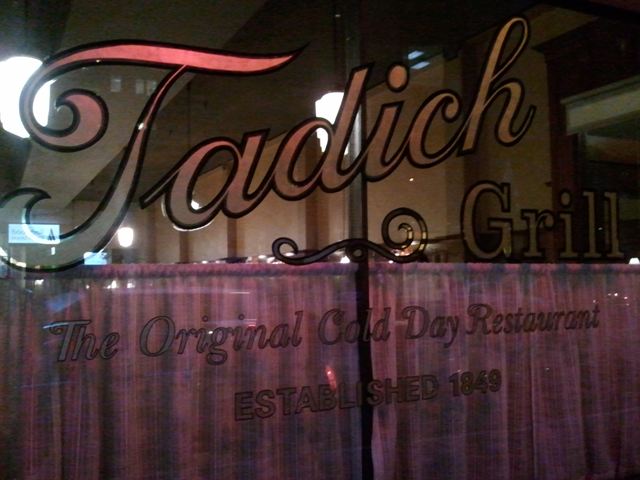 So, if Tadich Grill is indeed the same restaurant from 1849 after 3 ownership changes, 8 locations, and several name changes, it seems like an exaggeration to me, especially compared to the oldest continuously operated restaurant in the U.S., Boston’s Union Oyster House, which opened in 1826 as the Atwood and Bacon Oyster House, and is still in the same location. Or the second oldest, Antoine’s in New Orleans, which opened in 1840, moved one block in 1868 to its present location, and has been run by the same family since the beginning! However, Tadich Grill definitely dates back to 1912, the first year it opened by its present name, which is some real longevity for a restaurant. 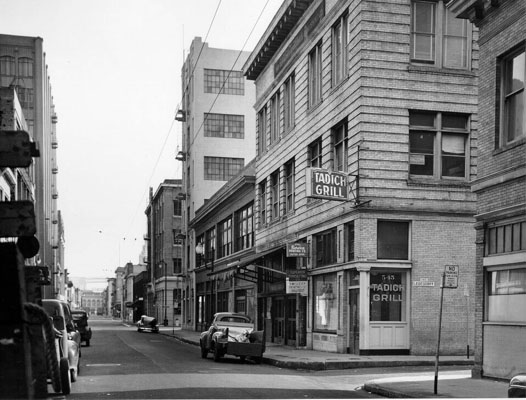 For a restaurant built in the 1960s it looks much older. There is a long bar / counter at the front, classic 1920s style tile floors, tables with bent wood chairs in the middle and back of the restaurant, and semi-private wooden “compartments” (the best word to describe them) with tables along one side of the long space. 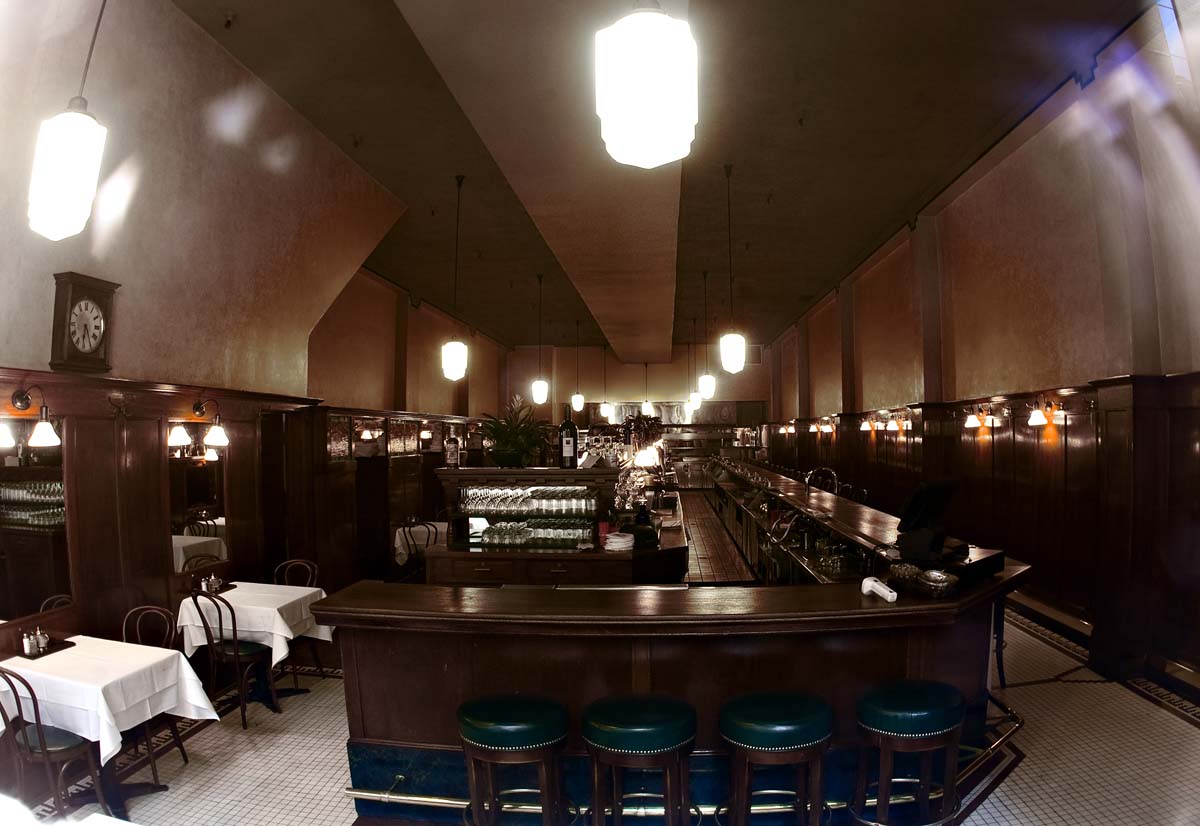 Tadich Grill’s specialty is fresh fish grilled over Mesquite charcoal, which the Buich family says was introduced at Tadich Grill in 1924. But they also serve excellent Louie salads, such as a Dungeness Crab Louie (when in season), a great seafood Cioppino (an Italian tomato-based seafood stew), a locally historic dish called Hangtown Fry (bacon and fried oyster frittata), Oysters Rockefeller, and many more specialties. The sourdough bread is always good, and the martinis and Manhattans are well made. They do not take reservations and it’s very popular so be prepared to wait if you arrive during lunch or dinner.

See inside Tadich Grill (pan and zoom like in Google Street View): 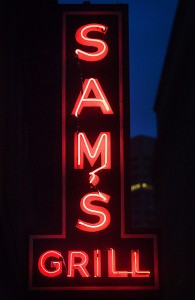 Sam’s Grill opened in 1931 by Sam Zenovich (Zenovich also owned a successful oyster company, whose origins go back to 1867 under the previous owner) as Sam’s Seafood Grotto, on California Street. In 1936 Zenovich passed away and Frank Seput purchased the restaurant, renaming it Sam’s Grill and Seafood Restaurant, which moved to its present location in 1946. 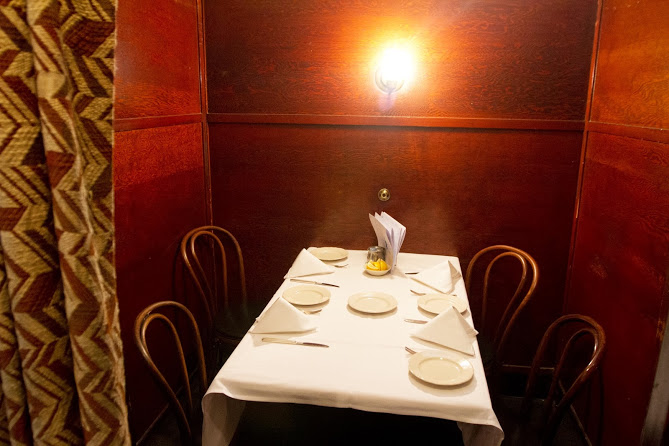 Photo by Douglas Zimmerman on Zagat.com

The restaurant is a great time-travel experience back to the 1940s, from the curtained private dining compartments with buzzers to call the white-jacketed waiters to the menu of many classic seafood and meat dishes. You will see dishes on the menu you rarely see anymore, such as Celery Victor, Crab Newburg, Stewed Tomatoes, Salisbury Steak, sweetbreads prepared three ways, and Long Branch potatoes. If you eat veal, I recommend the veal Porterhouse with bacon, perhaps with shoestring potatoes. If you feel like seafood the sand dabs and sole are good choices when in season (just ask the waiter which fish are fresh that day). The sourdough bread is justly famous here. 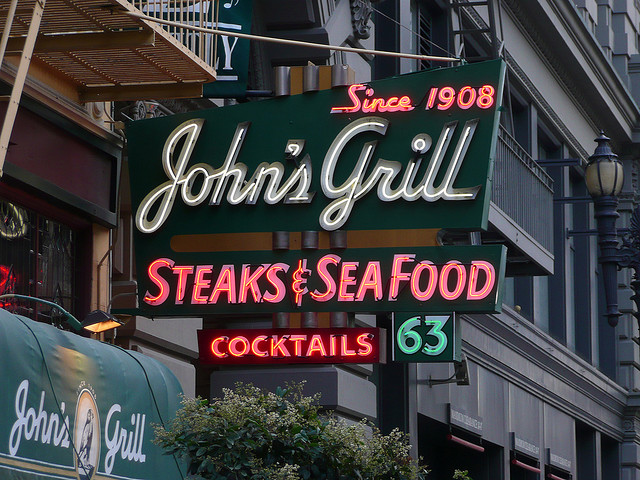 John’s Grill’s sign states that it opened in 1908, and a restaurant called John’s Grill was mentioned in Dashiell Hammett’s 1927 mystery novel The Maltese Falcon, set in San Francisco. But facts are hard to find (online anyway). The restaurant certainly looks old, though it has been remodeled more than Sam’s. In any case, it is a treat to visit, as it does have a lot of history, and it’s crammed with old photos and mementos, including a reproduction of the Maltese Falcon used in the film. The steaks are what to order here, which are aged Prime (USDA certification) or Black Angus (depending on the cut, I guess). 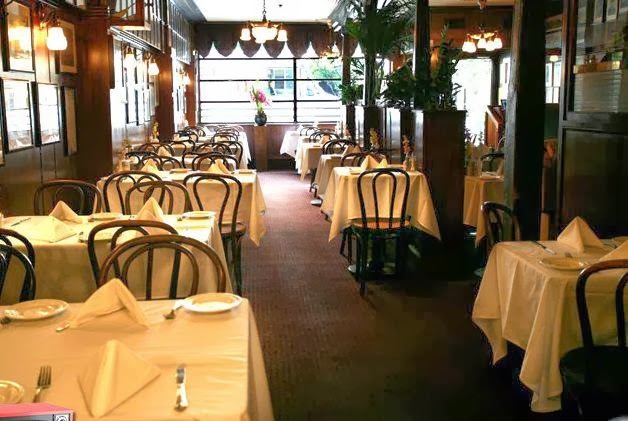 photo by John’s Grill on Google.com