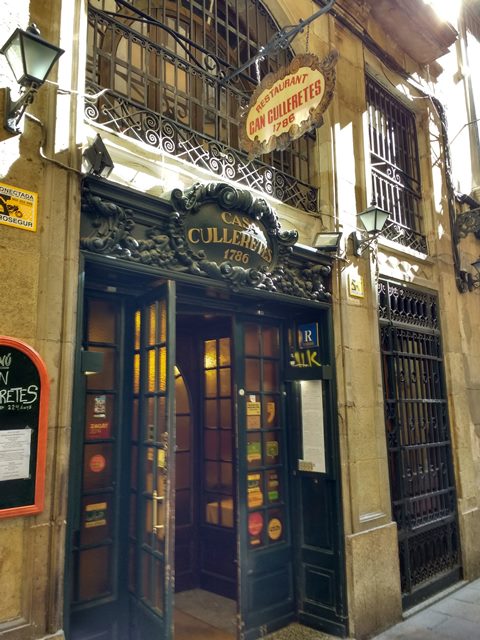 Can Culleretes (basically “House of Spoons” in Catalan) in the Gothic Quarter of Barcelona started out in 1786 as a dessert café (which is the most likely source of its name) serving crema catalana, chocolate, puddings, and horchata (tigernuts, water, and sugar). In the late 19th century Tito Regás purchased it and converted it to a restaurant. For the restaurant’s decor he had three large murals painted by Francesc Tey, hung large iron chandeliers, and hired famous Catalan ceramicist Xavier Nogués to create decorative panels. The result is a beautiful and restful space, perfect for a leisurely meal. In my opinion, too many new restaurants in Barcelona go for minimalist, sleek decor, which feels cold and boring. I prefer a warm, classic restaurant like Can Culleretes with a lot to look at. 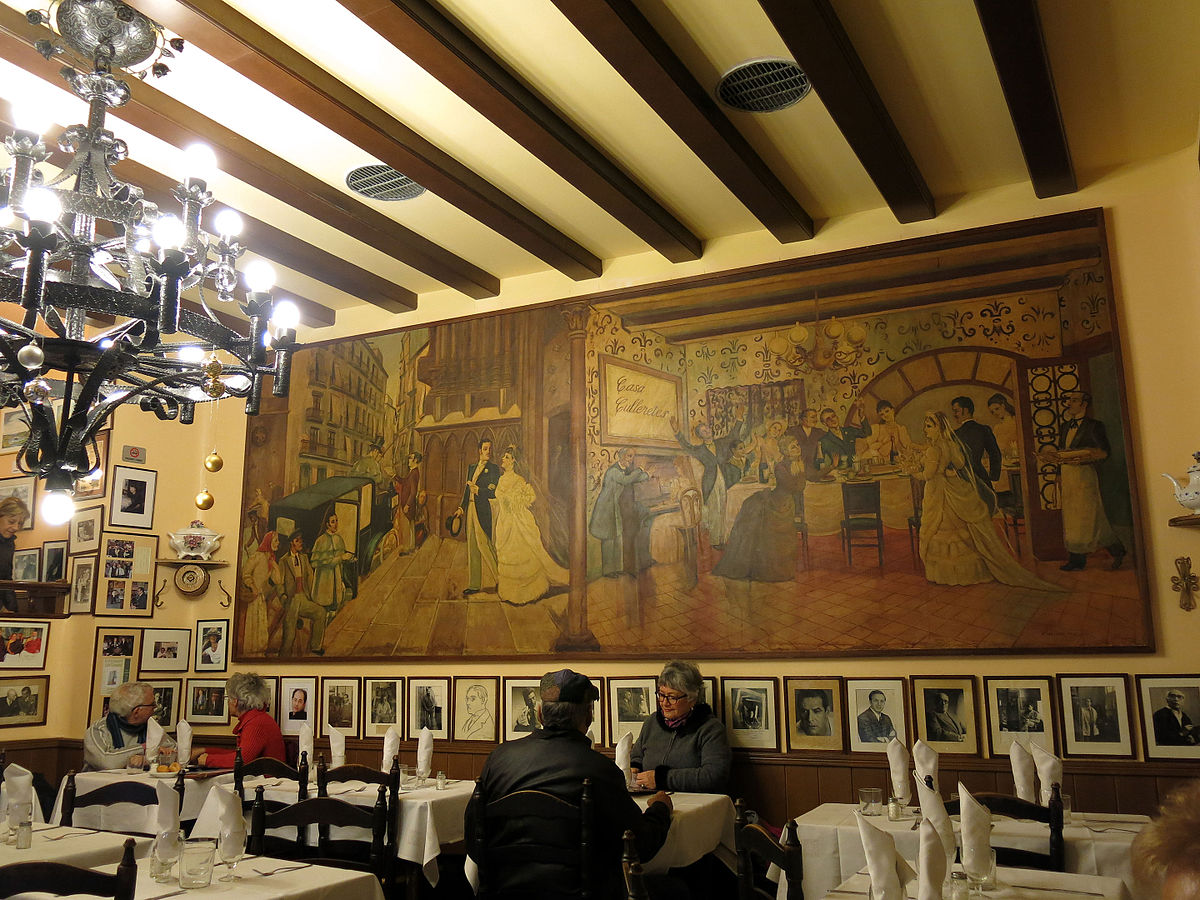 In the middle of the 20th century Sussi Manubens and Siscu Agut took over the restaurant and still run it (with their children and grandchildren’s help). On the walls hang many photos of famous Catalan matadors, musicians, artists, politicians, and journalists who have visited the restaurant since the Manubens and Agut families took over. 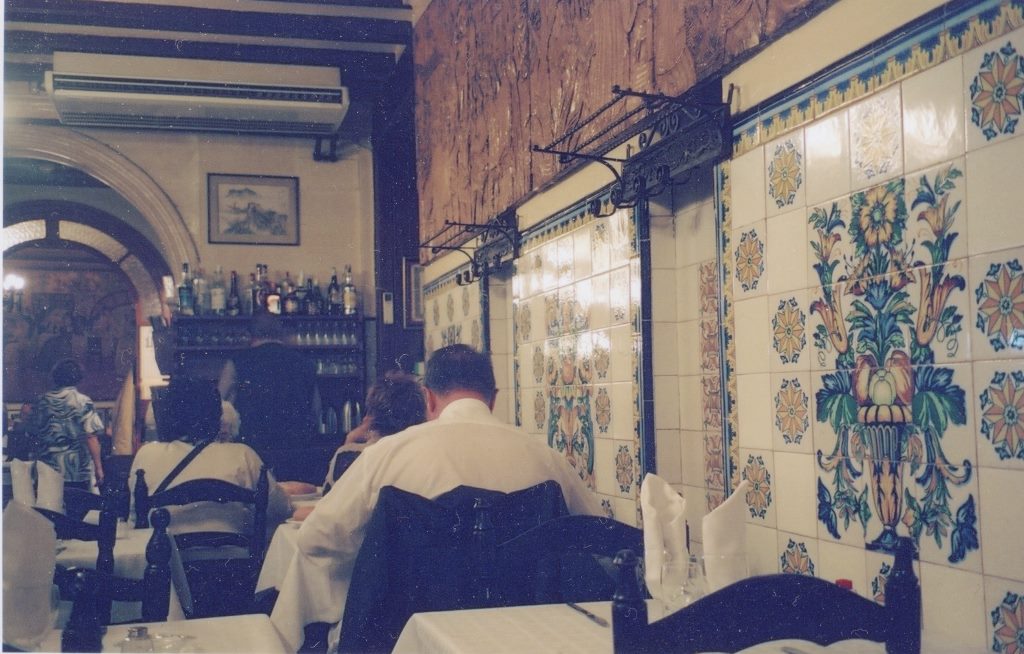 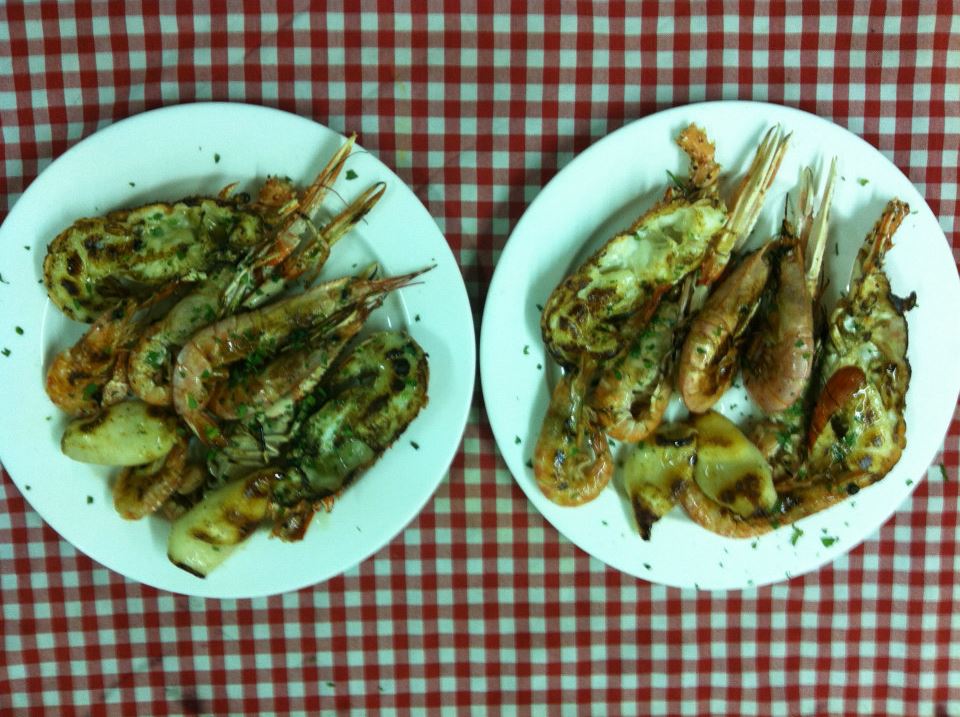 The restaurant takes pride in their hand-made desserts and I recommend trying their menu del dia luncheon, only €17.50 for three courses (starter, main, dessert).

Last year I returned to Barcelona for the first time since 2004. The city I loved then has gotten better and better, with more dining and drinking options and more sights to see. I especially loved seeing some Modernist architectural wonders that I missed in 2004 as I concentrated on the most famous Gaudi sights on my first visit (I’m glad I did then because the lines were much, much longer this time). Highlights this time for me were Lluís Domènech i Montaner‘s astounding Palau de la Música Catalana and Hospital de Sant Pau (just opened to the public in 2014), both UNESCO World Heritage Sites. And I braved the crowds to see the awesome interior of Gaudi’s Sagrada Familia, which is getting close to completion (due in 2026). 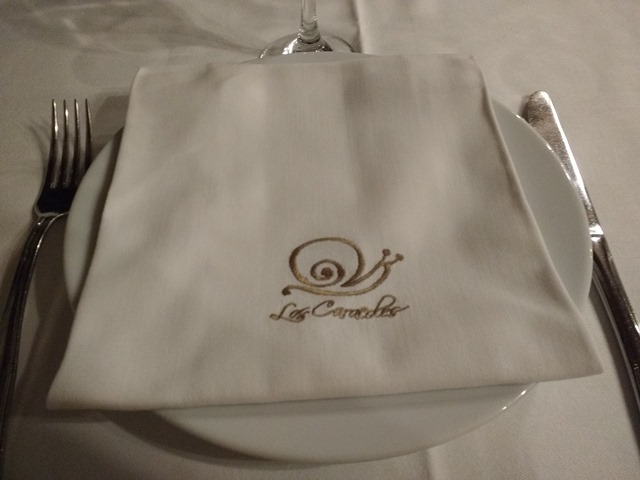 One of Barcelona’s oldest restaurants, Los Caracoles (aka Casa Bofarull) was opened in 1835 by the Bofarull family. Today fifth generation family member Aurora Bofarull runs the restaurant. Over the 180 years since it was founded, Los Caracoles (the snails) has attracted many celebrities, presidents, and other notables. 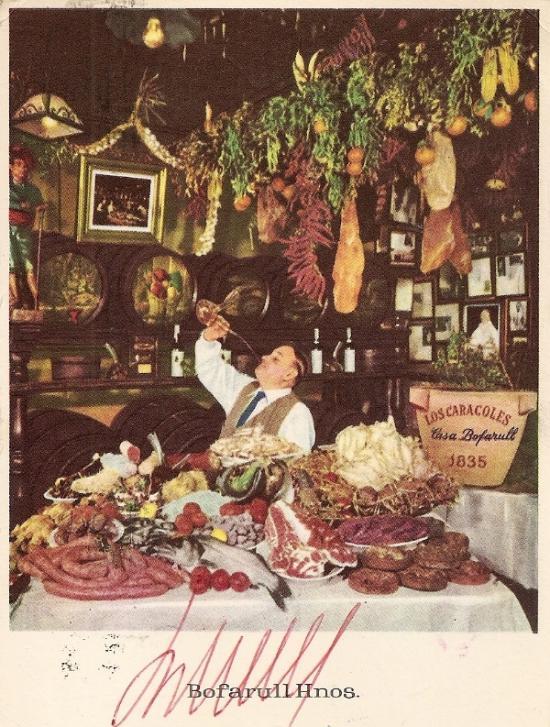 Los Caracoles is located in the Gothic Quarter just off Las Ramblas. The outside corner of the restaurant features a chicken broiler visible through glass doors. If you stand there long enough you may see a chef come outside to baste the chickens. Once inside the door you enter the atmospheric bar with high ceilings, wooden cabinets and barrels, and a huge wrought iron chandelier. 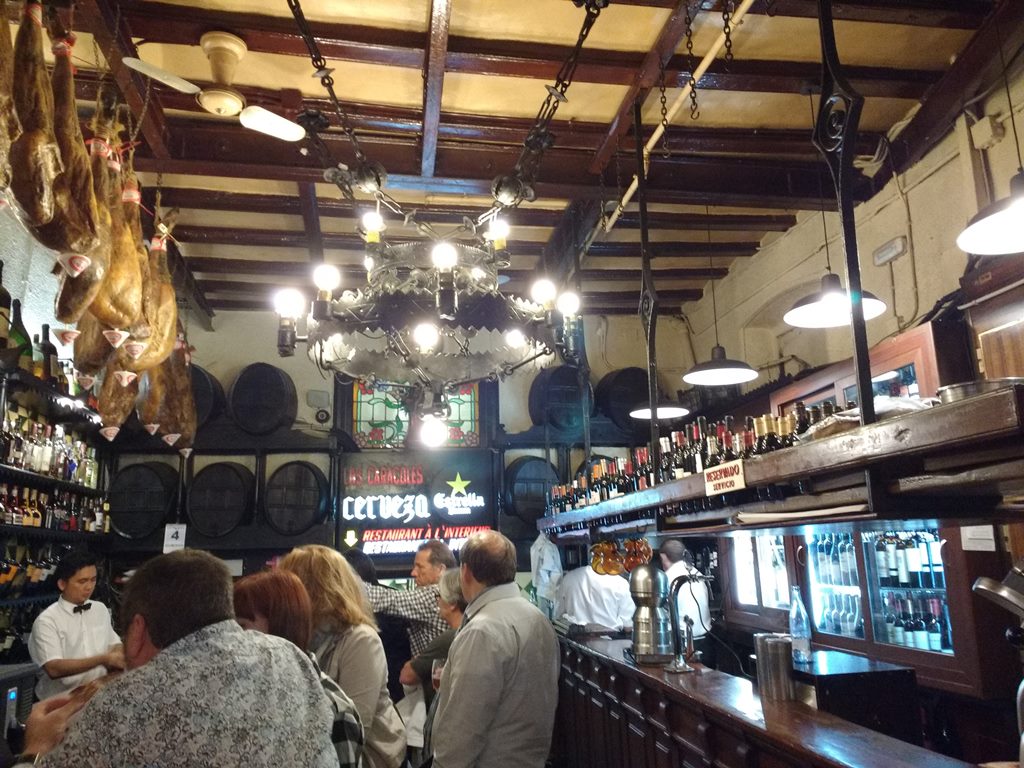 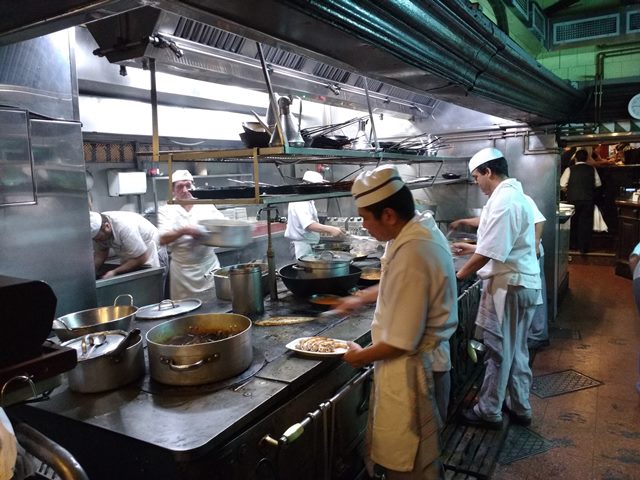 At the end of the kitchen the host escorts you to your table through a warren of dining rooms, each with their own historical charms. Photos are everywhere of famous Spaniards and people from around the world who have dined at the restaurant. 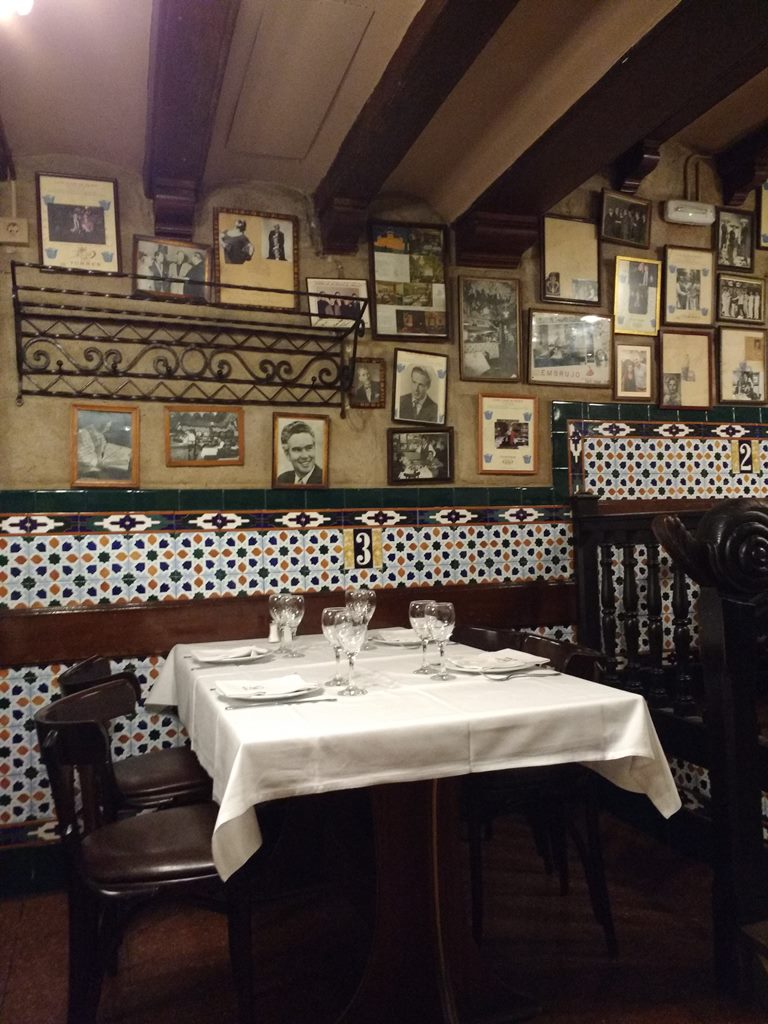 The menu is traditional Catalan/Mediterranean. Their specialties are snails, mussels, garlic prawns, beans Catalan style, butifarra sausage with beans and mushrooms, roasted chicken, steaks and chops, paella, and a large seafood platter. I opted for the snails, which are served in sauce and with toothpicks to dig out the morsels. Note these are not like the escargot you may have had in the US or France. These snails are smaller and the meat is dark brown to black and slightly chewy but tender. Not for the squeamish about snails! 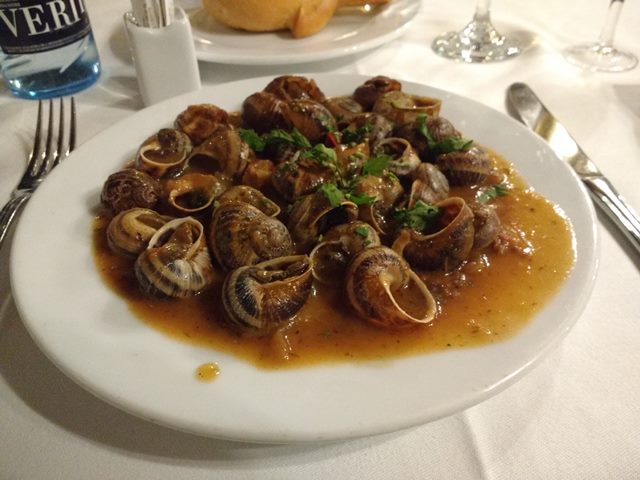 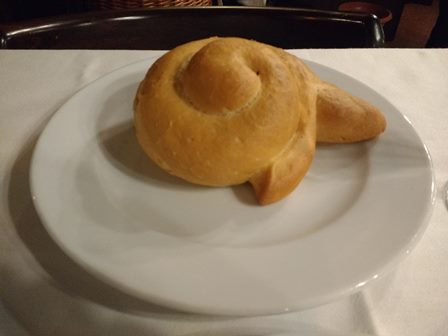 For my main dish I had delicious butifarra sausage with beans. And for dessert some crema Catalana, which is a must when in Catalonia! Bon profit! (Bon appetit in Catalan)

Back in 2004 I was planning a trip to Spain to attend the incredible music festival called Wild Weekend, held in Benidorm every year until 2004, when I found a great online source of information about Barcelona called City in Space. The web site and companion book highlighted the best remnants of mid-20th century Barcelona, from art deco to tiki, and included restaurants, bars, hotels, theaters, and shops. Unfortunately, many of the places mentioned are now gone or remodeled, however some of the best happily remain, including all three tiki bars, the wonderfully Mod Tortilleria Flash Flash, and the oldest bar in Barcelona, Boadas. 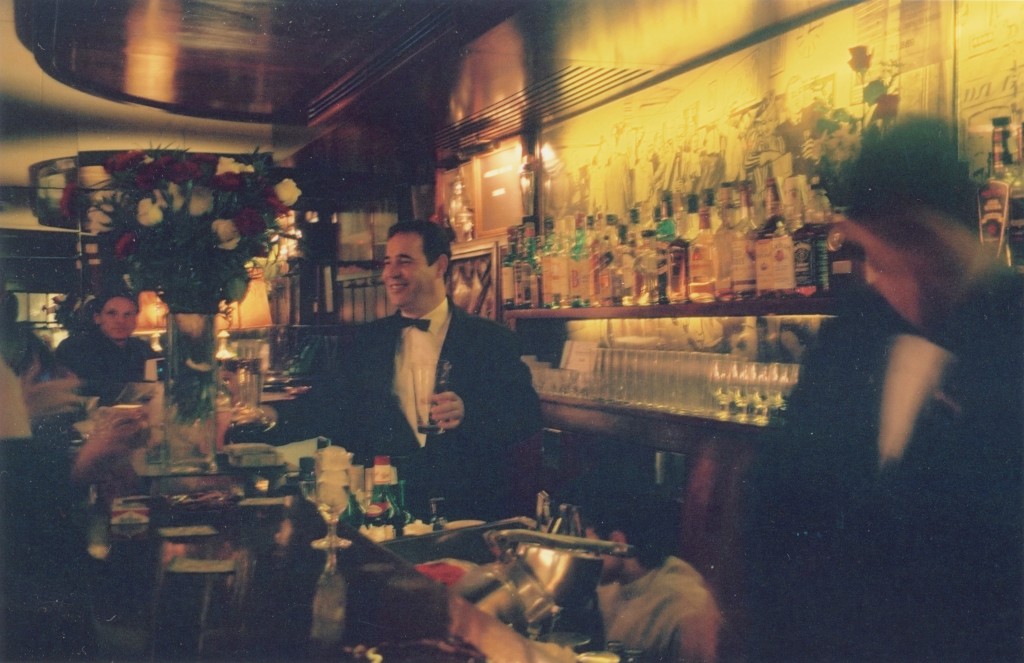 I immediately fell in love with Boadas and it remains one of my favorite classic bars in the world. The history; the classy atmosphere; the well-dressed bartenders who can make any classic cocktail and probably every historic Cuban cocktail with just the right amount of flair. It was like no other bar in the world in 2004. Now there are many newer ones like it but without the history, the patina, and the neighborhood feel. 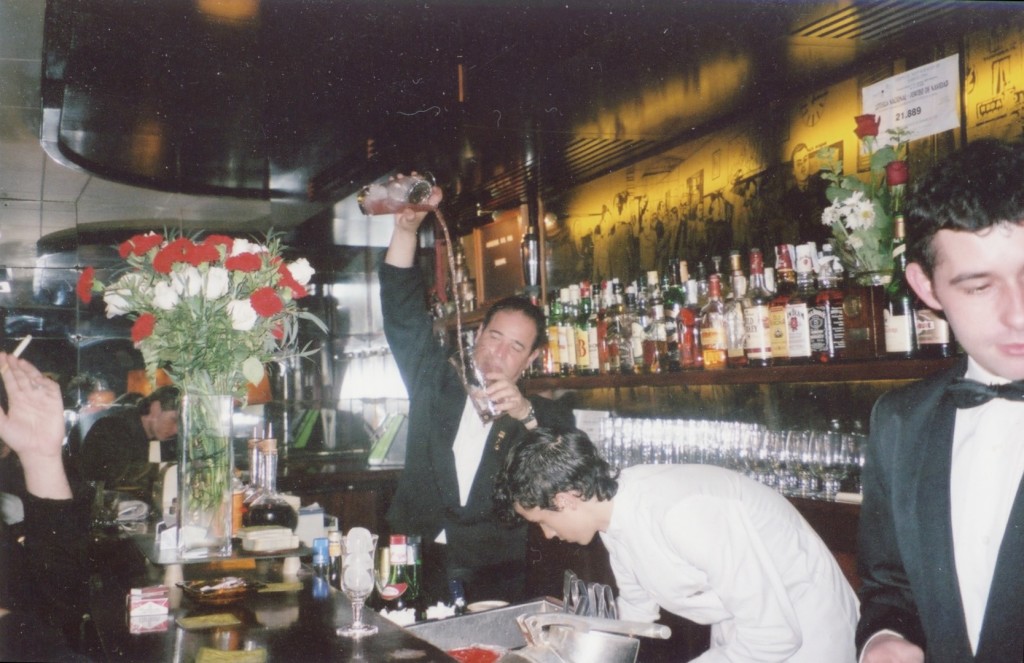 A brief history: in 1933 Cuban-born Miguel Boadas opened his bar simply called Boadas in El Raval just off La Rambla in Barcelona, where it still stands. Although he was born in Cuba, his parents were from Catalonia. Miguel learned to tend bar at the famous El Floridita in Havana, owned by his cousin Narcís Sala Parera. The bar was frequented by many American celebrities escaping Prohibition, most notably Hemingway, and there Miguel learned the Cuban cocktail traditions and recipes, which he brought back to Spain in 1922, taking on bartending jobs in Barcelona until opening Boadas. The bar survived the Spanish Civil War, was enlarged and developed a clientele of famous Catalan writers artists, and celebrities. Today Miguel’s daughter Maria Dolores runs Boadas. 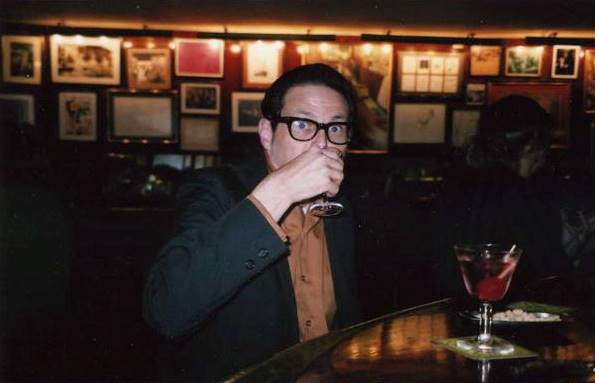 yours truly at Boadas – photo by Jeffrey Gouin, 2004

Cuba had a rich cocktail history in the first half of the 20th Century. There are dozens of cocktails that were invented at the bars El Floridita and La Bodeguita. The daiquiri and mojito are well-known, but there are many more that are less common. Boadas can make all of them. It is the only surviving bar with connections to the glory days of Cuban mixology. El Floridita bar still exists in Havana, and is definitely worth visiting, but it is a tourist attraction that can only serve you a popular cocktail like a mojito. Cubans don’t drink there anymore. All the original bartenders and the vast number of recipes they had knowledge of are lost to time, except at Boadas. They don’t have menus at Boadas, but on the chalkboard is a different ‘cóctel del dia’ every day, which are always good.

I’m excited to be going back to Barcelona very soon, and to be visiting Boadas for a cóctel del dia! Salut! (the Catalan toast)