Apparently today is National Root Beer Float Day. It seems there is an official day for every food these days. I’m fine with that! So it seems fitting to post about a town with great root beer and ice cream (or frozen custard).

In 2002, 2005, and 2007 the amazing Rockin’ 50s Fest took place in Green Bay, Wisconsin; seven days of some of the best rockabilly, rock ‘n’ roll, and country acts from the 1950s to the 21st century. Some of the artists that performed included Jerry Lee Lewis, Little Richard, Link Wray, the Collins Kids, Hank Thompson, Ike Turner, The Crickets, and many, many more. I attended two of the festivals, flying into Chicago and enjoying road trips to Milwaukee and eastern Wisconsin to Green Bay. Previously I posted about George’s Steak House in Appleton. Today we’ll be visiting a small town with not just one, but two original mid-century drive-ins – Oshkosh, Wisconsin. 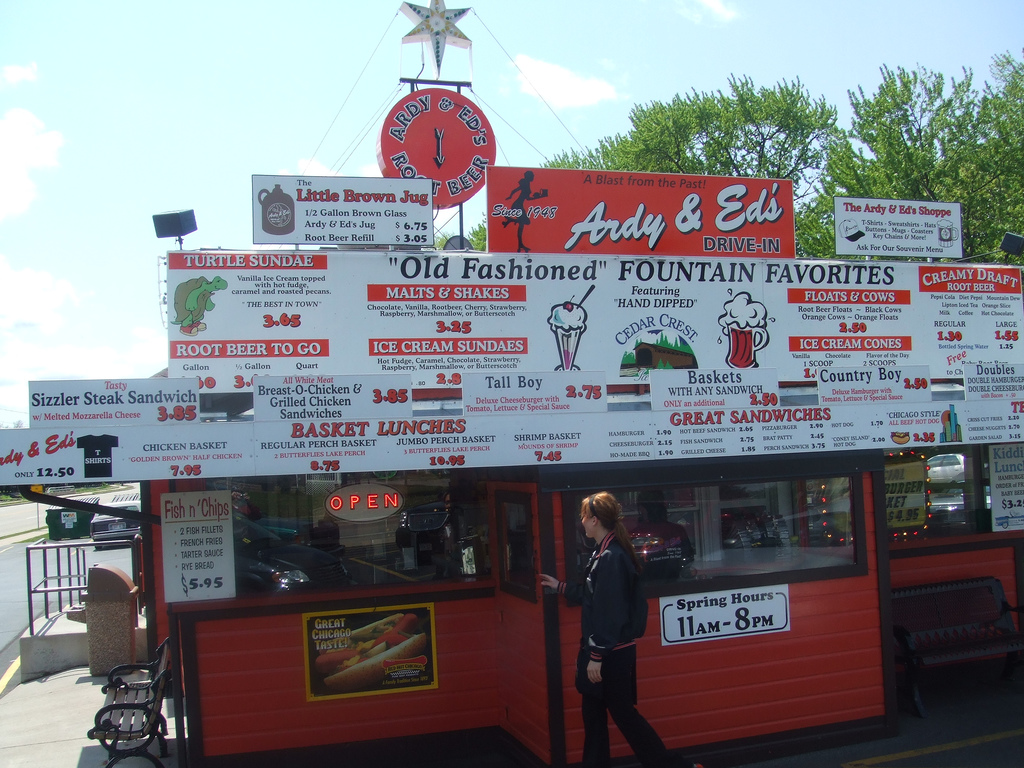 Ardy & Ed’s Drive-In is perhaps the only original mid-century drive-in left that still has car hops on roller skates (actually, in the 1950s the car hops here didn’t wear roller skates, as you can barely make out in this photo). 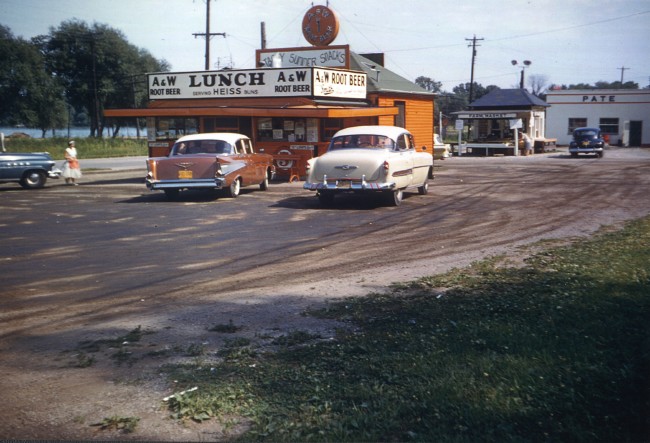 It opened in 1948 as the Southside A&W Drive-In, one of a chain of A&W Root Beer drive-ins around the country. A few functioning A&W drive-ins still exist, mostly in Wisconsin and Michigan. 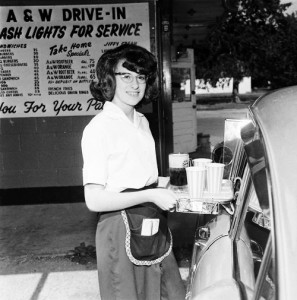 In 1960 Ardythe and Edward Timm bought the restaurant. In 1972 they went independent, renaming it Ardy & Ed’s, and they continued to make the draft root beer in-house. Today Ardy and her husband Steve own the restaurant, still making fresh root beer each day. 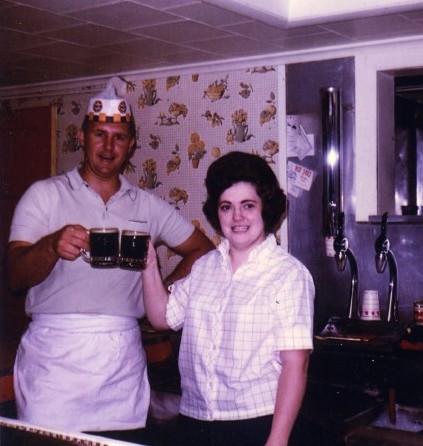 Ardy and Ed’s menu is long, filled with burgers, hot dogs, sandwiches, and combo baskets. Their burgers are great and their root beer is outstanding. And of course they have root beer floats (voted best root beer float in Oshkosh), orange floats, and “cows” (root beer or orange soda whipped with ice cream). The ice cream for their floats comes from Cedar Crest, a quality Wisconsin ice cream manufacturer. 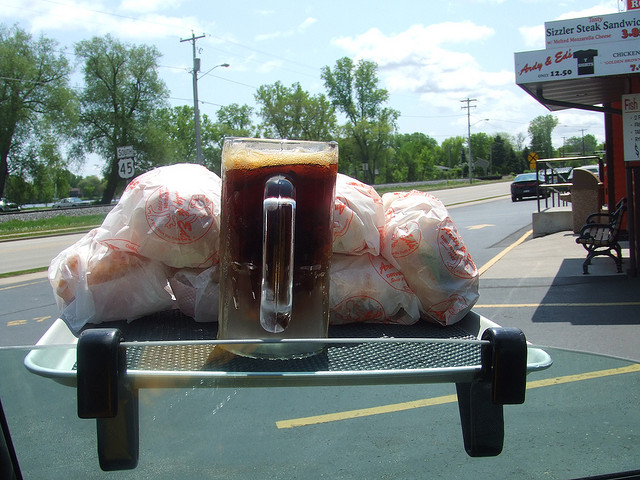 Friendly car hops on roller skates take your order and bring your food to your car (from the spring through fall). 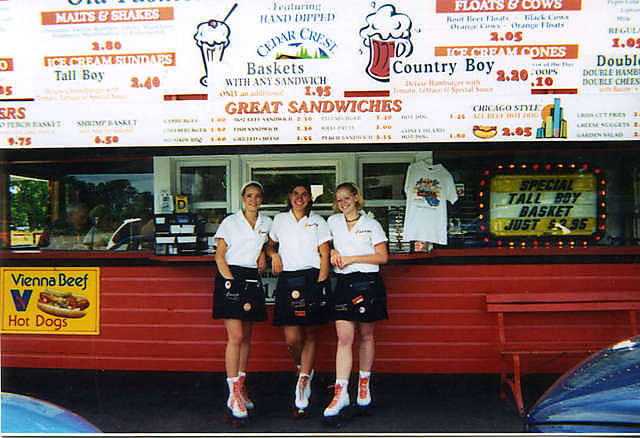 photo by Steve on Urbanspoon.com

After your meal at Ardy & Ed’s, why not have some frozen custard for dessert? In California we have soft serve ice cream but it is nothing like frozen custard (soft ice cream made with eggs) that you have to go to the midwest, preferably Milwaukee, to really experience (as well as such treats as brats, butter burgers, and lake perch fish fry). In Oshkosh, Leon’s Drive-In (not affiliated with the famous – and fabulous – Leon’s frozen custard in Milwaukee) has made frozen custard fresh every day since 1947. 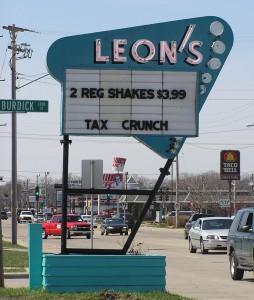 Leon’s also has car hops! Except in the winter (see last photo below). 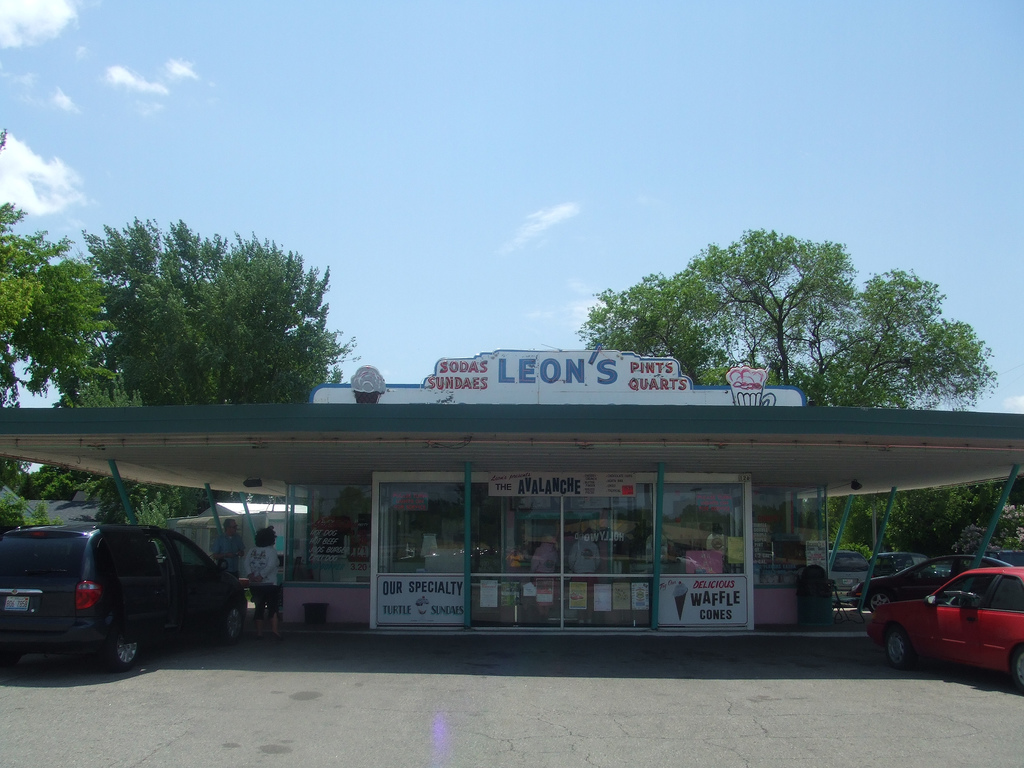 Leon’s menu includes sandwiches, such as their famous sloppy-Joe style Joos burger, and custard treats like cones, cups, and sundaes. They have a root beer float made with homemade root beer and frozen custard, and their version of a cow, called a whip. A specialty is their turtle sundae, frozen custard topped with hot fudge, caramel, and pecans. 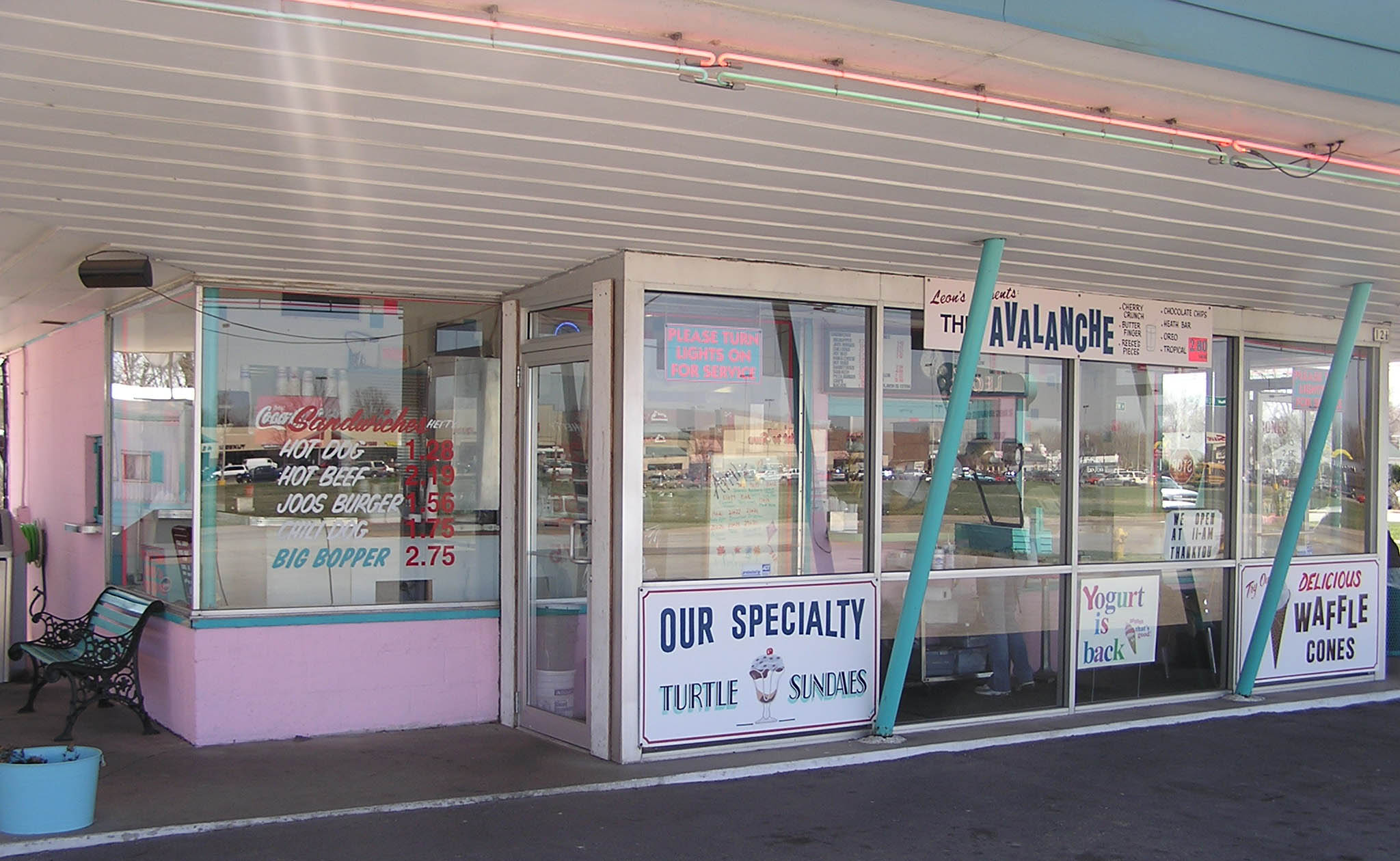 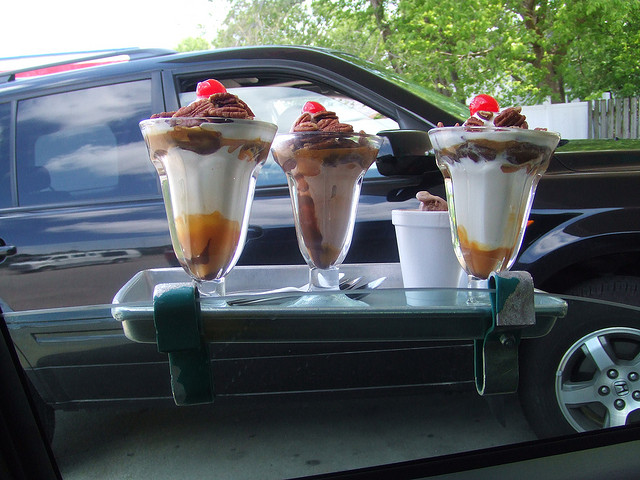 If you are ever in eastern Wisconsin, you should stop in Oshkosh for probably the best time travel drive-in experience in the U.S.! The town has a lot of history, so it’s well worth a bit of exploring. The famous Oshkosh B’Gosh overalls are no longer made in Oshkosh, but the company still has its headquarters there. 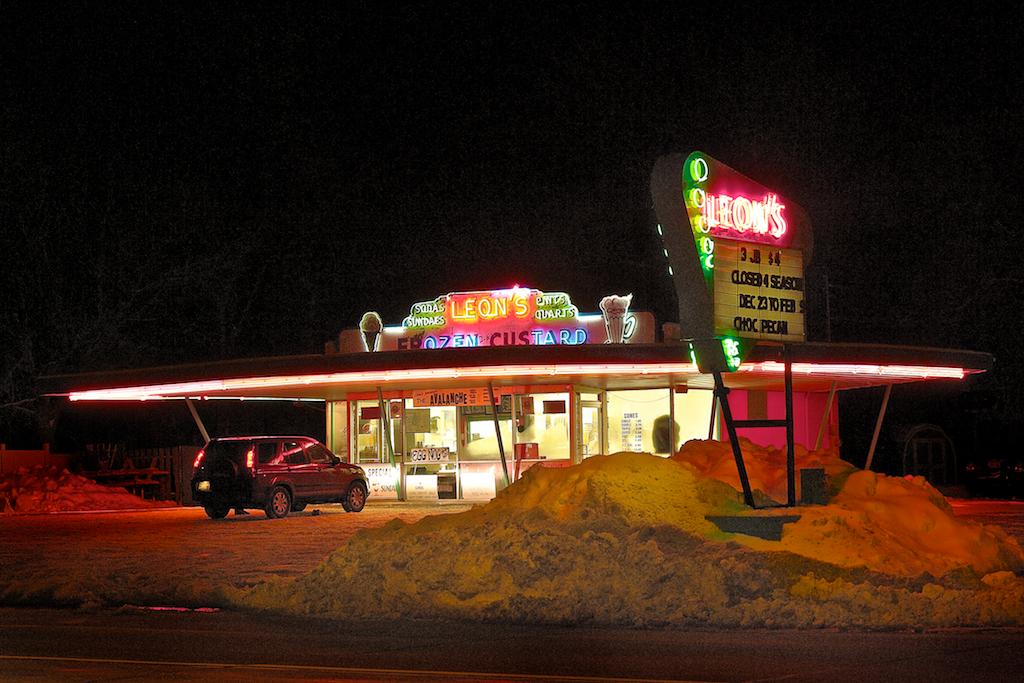 1 thought on “Drive-Ins of Oshkosh, Wisconsin”