Le Continental is a big fan of nautical themed restaurants and bars. Not the contemporary type of brightly lit rooms with furnishings in light oak, blue, and white, but the rich, old nautical style of dark varnished woods, brass fixtures, and lots of flotsam. The HMS Bounty is fairly well known as a dive bar, but I think of it also as a restaurant. It has been one of my favorite places to dine at in Los Angeles for many years. 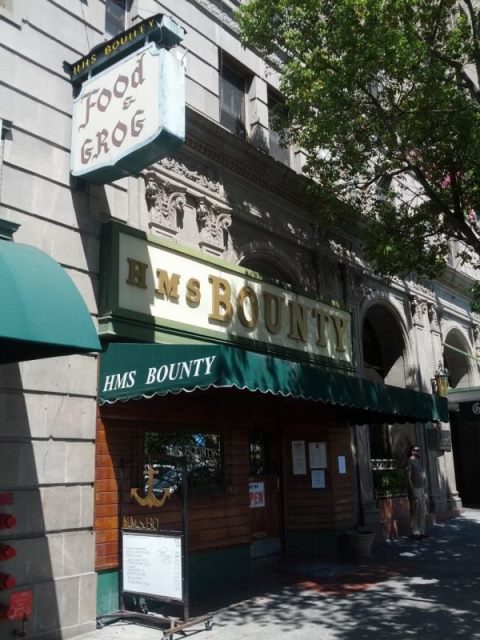 The HMS Bounty was opened in 1962 by restauranteur Gordon Fields in the Gaylord Hotel, which opened in 1924 on rapidly growing Wilshire Boulevard. The hotel was named after land developer Henry Gaylord Wilshire, who everyone called ‘Gaylord’. The 1920s were certainly roaring along this stretch of Wilshire, with the opulent Ambassador Hotel and Coconut Grove nightclub opening in 1921 (across from where the Gaylord stands,  demolished in 2006), the first Brown Derby restaurant opening down the street in 1926 (demolished in 1980), and the spectacular art deco Bullocks Wilshire department store open for business a bit farther east in 1929 (still standing). The Gaylord was a luxury apartment building which was the first co-op (like condos, the tenant owned each apartment) apartment building in the west, however the co-op model was a failure in Los Angeles at the time so eventually most of the units were rented out. 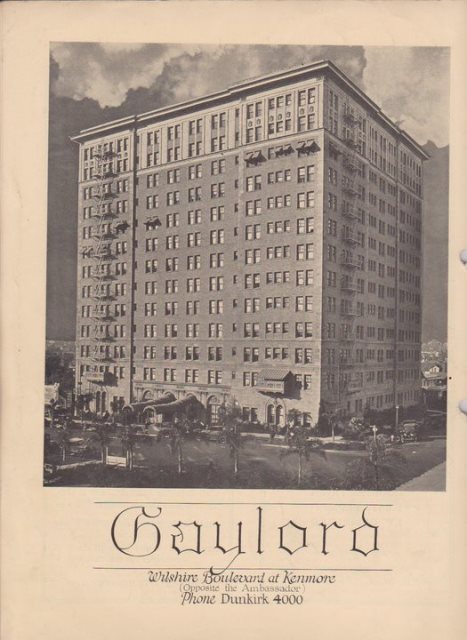 Before the space in the hotel became the HMS Bounty it was the Fountain Room, a lounge and ballroom (1924-1948), The Gay Room cocktail lounge (1948-1951), Dimsdale’s Secret Harbor (1951-?), and the Golden Anchor. When Gordon ‘Gordie’ Fields opened the HMS Bounty he already had success with his olde English Bull ‘n’ Bush steakhouse a block away on 6th and Kenmore streets, which he opened in 1956. He was a big sports fan, so he filled his first restaurant with sports memorabilia, which, along with the great steaks, attracted a clientele of sports personalities and celebrities (such as Jack Webb). The Bull ‘n’ Bush expanded down Kenmore Street and Fields (along with some partners) opened the HMS Bounty to accommodate even more diners. 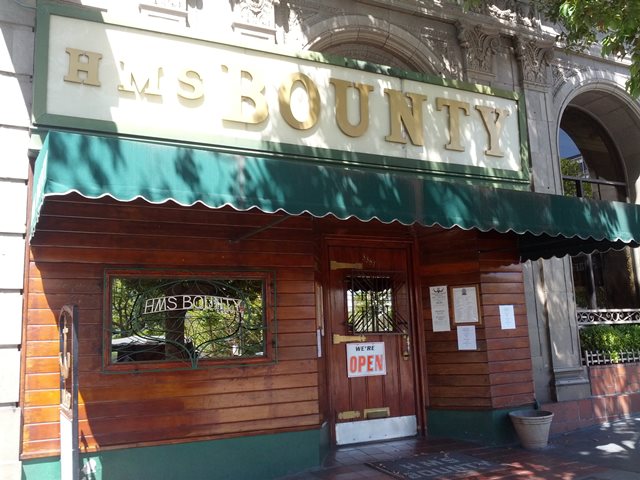 In a short time the Bounty became a power lunch spot and a popular cocktail lounge at night, where people had martinis before having dinner at the Brown Derby, the Windsor (now the Prince), or The Cove. The story goes that there was even a secret passage from the Coconut Grove across the street to the HMS Bounty. Some of the celebrities who frequented the HMS Bounty are Winston Churchill, William Randolph Hearst, Walter Winchell, Wilbur Clark, and Jack Webb (his booth was the last booth on the right after entering the bar, the one with the Bull ‘n’ Bush sign mounted above it). Gordon Fields passed away in 1998 and Ramon Castaneda, an employee at HMS Bounty since it opened, took over the restaurant. 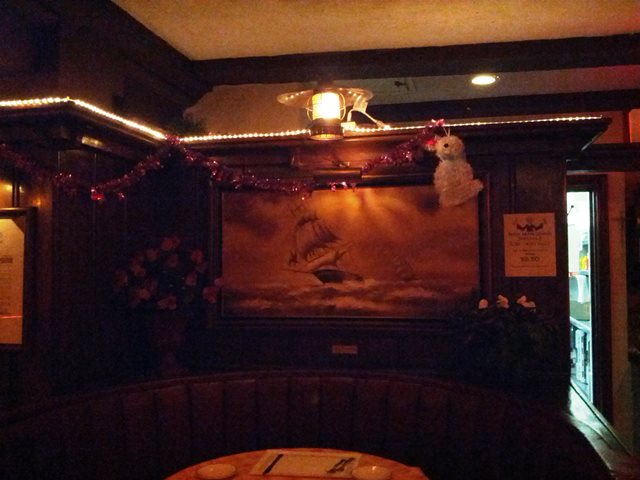 The bar at HMS Bounty is a great place to get a highball. It has the original red naugahyde booths and chairs, a model of the HMS Bounty behind the bar, and a jukebox stocked with 45s of pop standards and big band that only costs a quarter (they also have a CD jukebox on the wall). But I like to eat in the quiet dining room in back that has no TVs (it seems that every time I return to the bar there is another TV added, though at least they are small TVs). The same dark red vinyl booths, white linen tablecloths, simple nautical decor, and very dark (with no TVs). 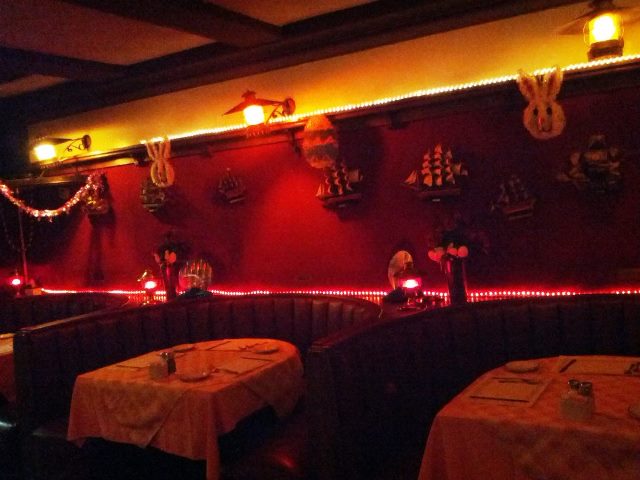 (guess what time of year I took that pic?)

The menu is very reasonably priced (all entrees under $20; sandwiches under $10) and includes steaks (8 types), chops, and seafood. The food is classic and good.

Make sure you use the bathroom during your visit, which is in the basement of the Gaylord Hotel, so you can see the 1920s opulence of the lobby and display case of hotel memorabilia. 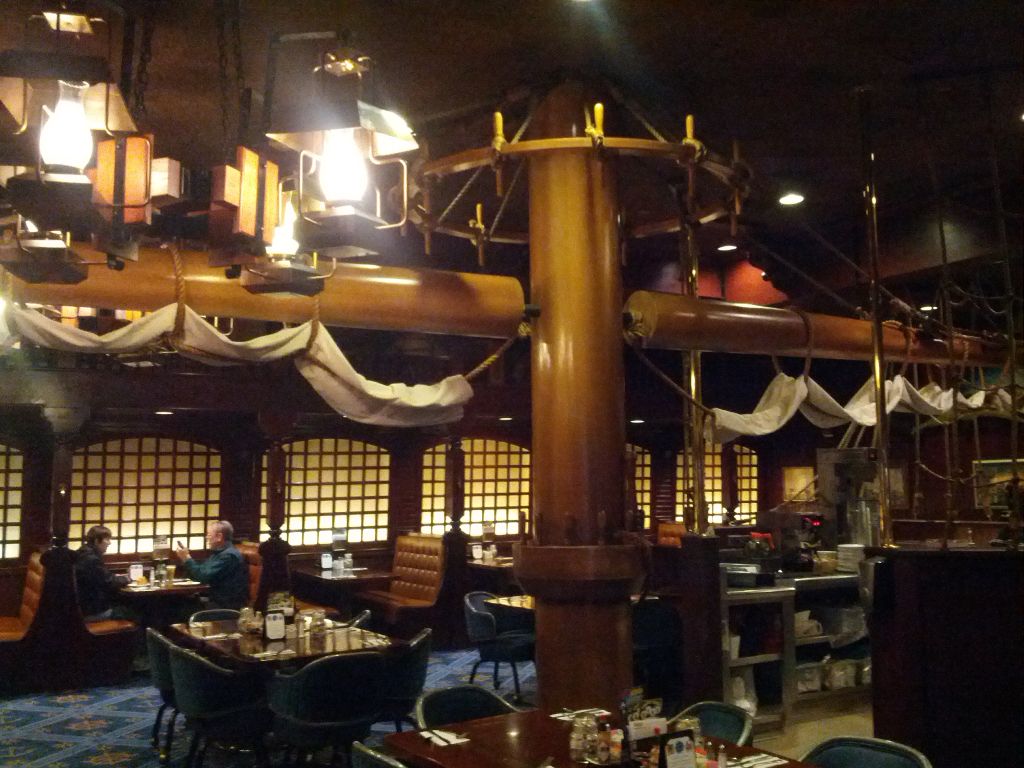 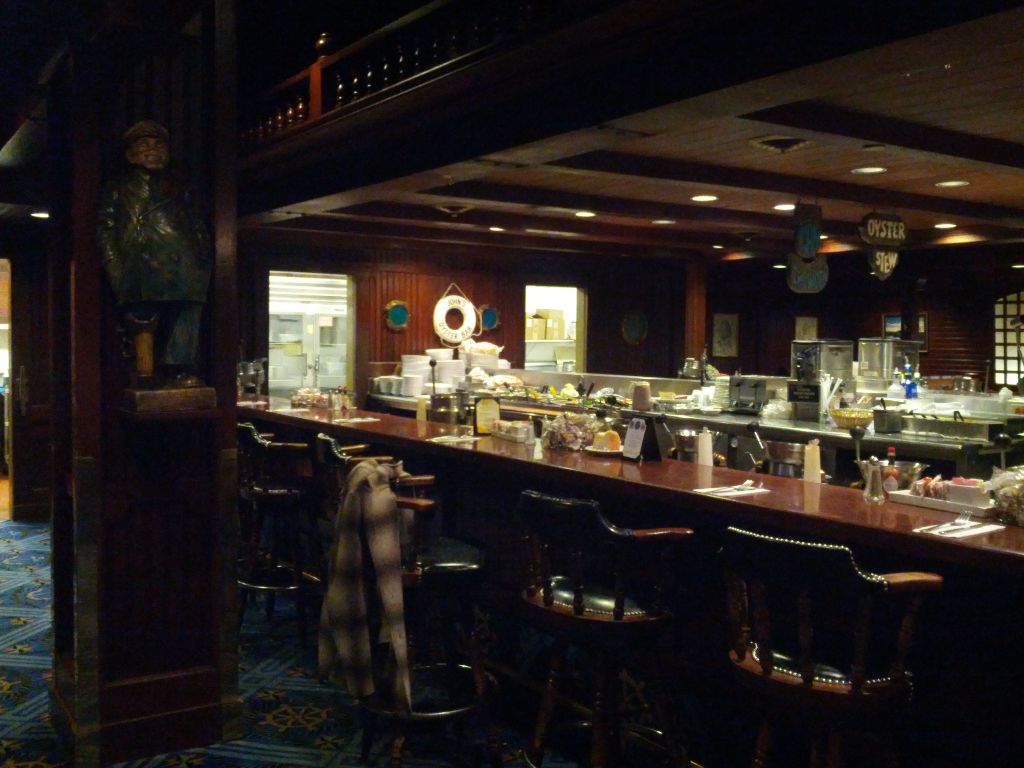 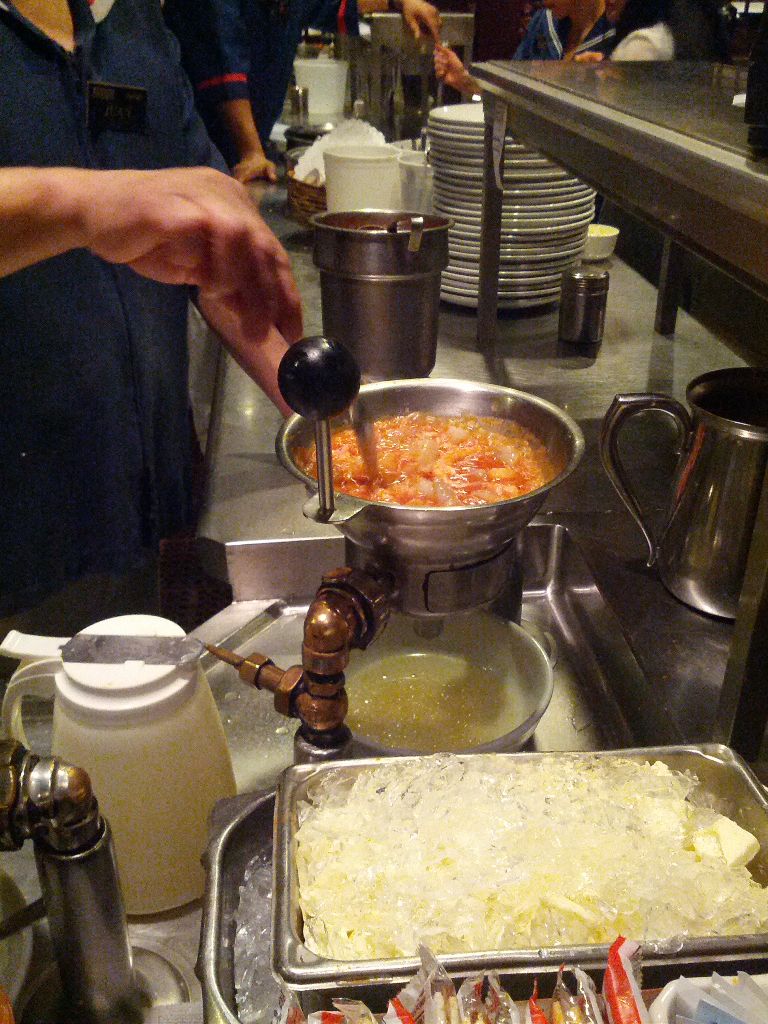 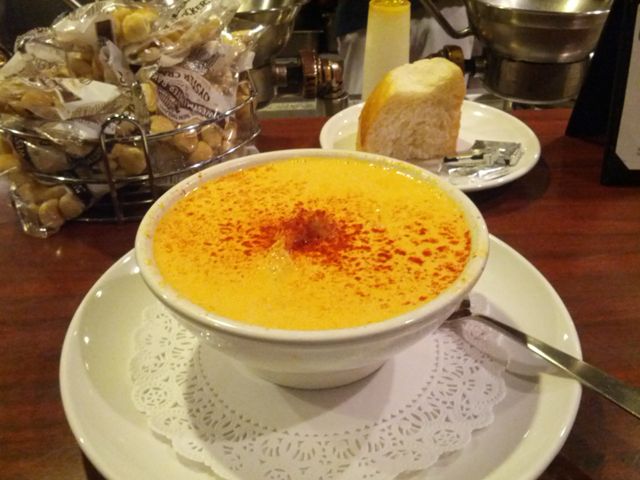 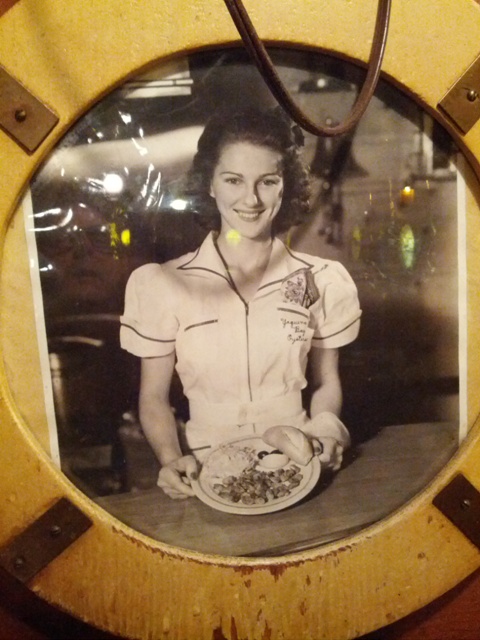 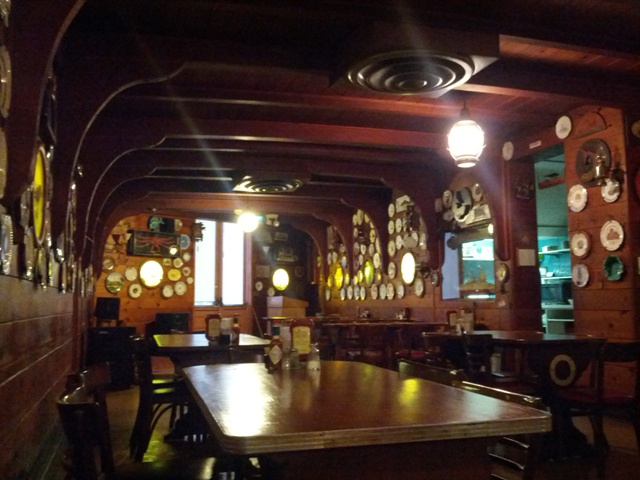 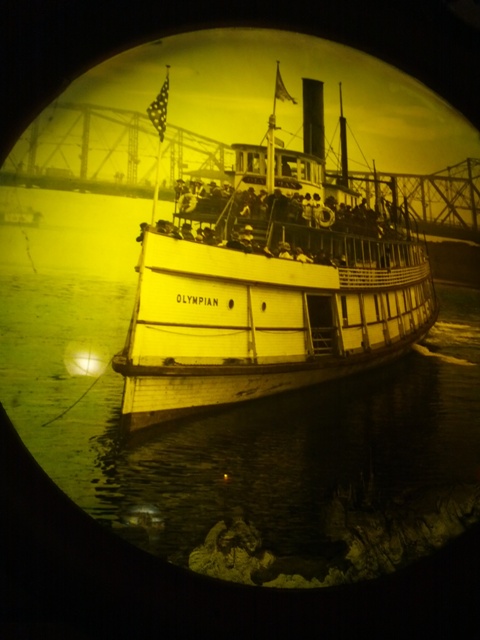 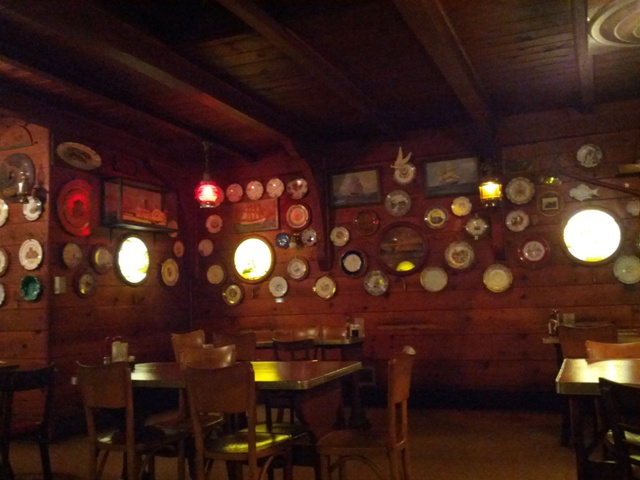 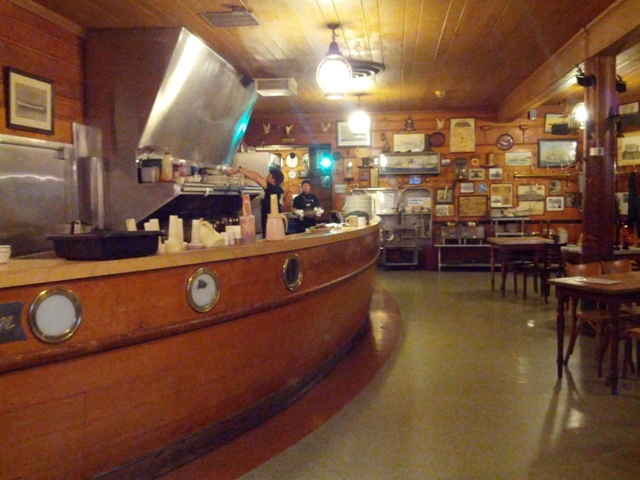 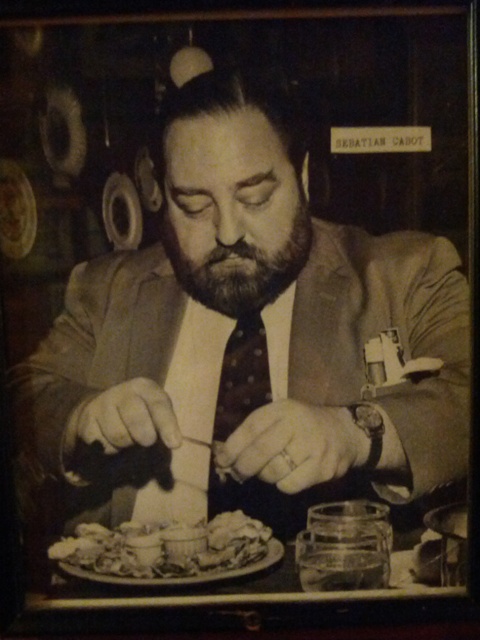 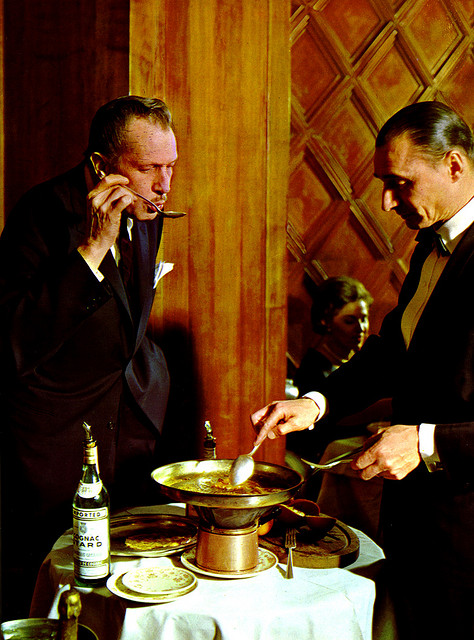