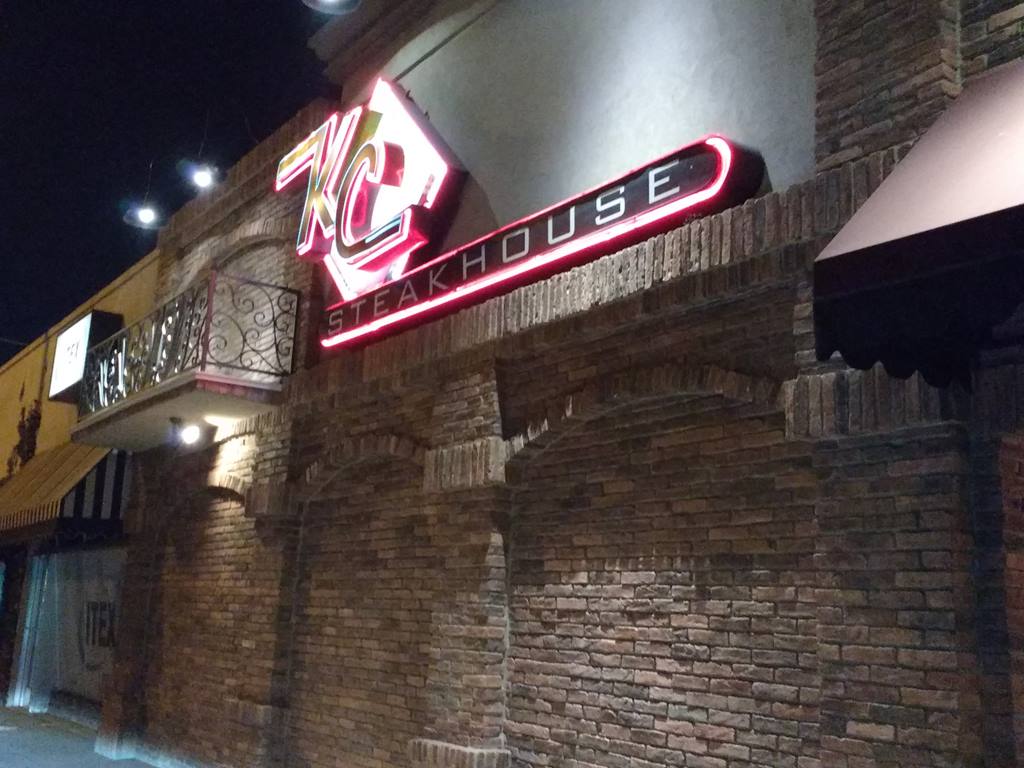 The K. C. Steakhouse in Bakersfield was opened in 1939 by ‘Doc’ Kennedy from Oklahoma City at 630 Union Ave. In 1967 it moved into its current location at 2515 F Street, a restaurant formerly named Greg’s Hi Life, which originally opened in 1952. The interior is a combination of Mid-Century Modern and Western, with its free-form dropped ceiling, giant copper fireplace, red leatherette booths, and wagon-wheel chandeliers (most likely all installed in 1952), with some large mirrors framed by lights (added later). There have been several owners over the years. Today it is owned by Charlotte Carter and Terry Campbell. 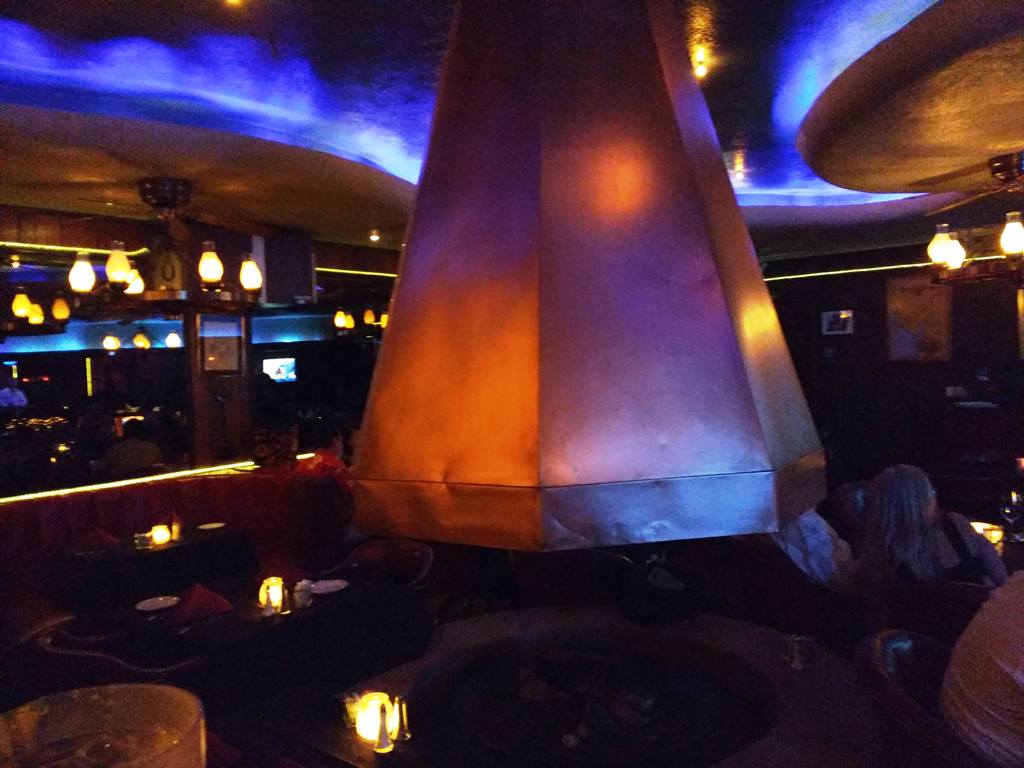 My photos are pretty dark, I hope but they give you a better idea of the atmosphere that way. The fireplace is used during the colder winter months but it wasn’t in use during my recent visit in early November. 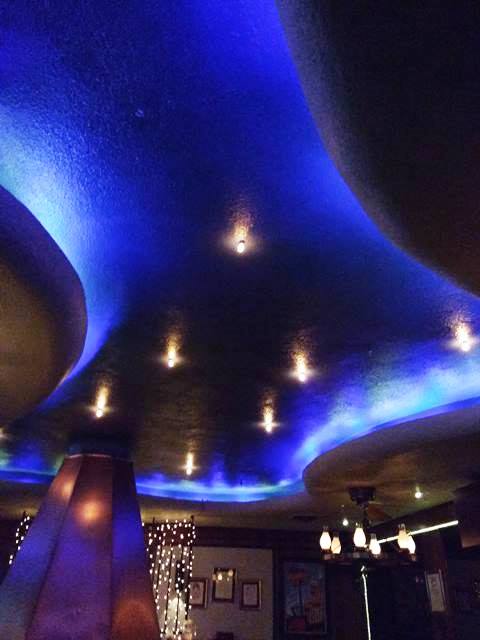 The bar and lounge have several TVs and a live band most nights of the week, but from the dining room the TVs were far enough away to not be a distraction or an annoyance. 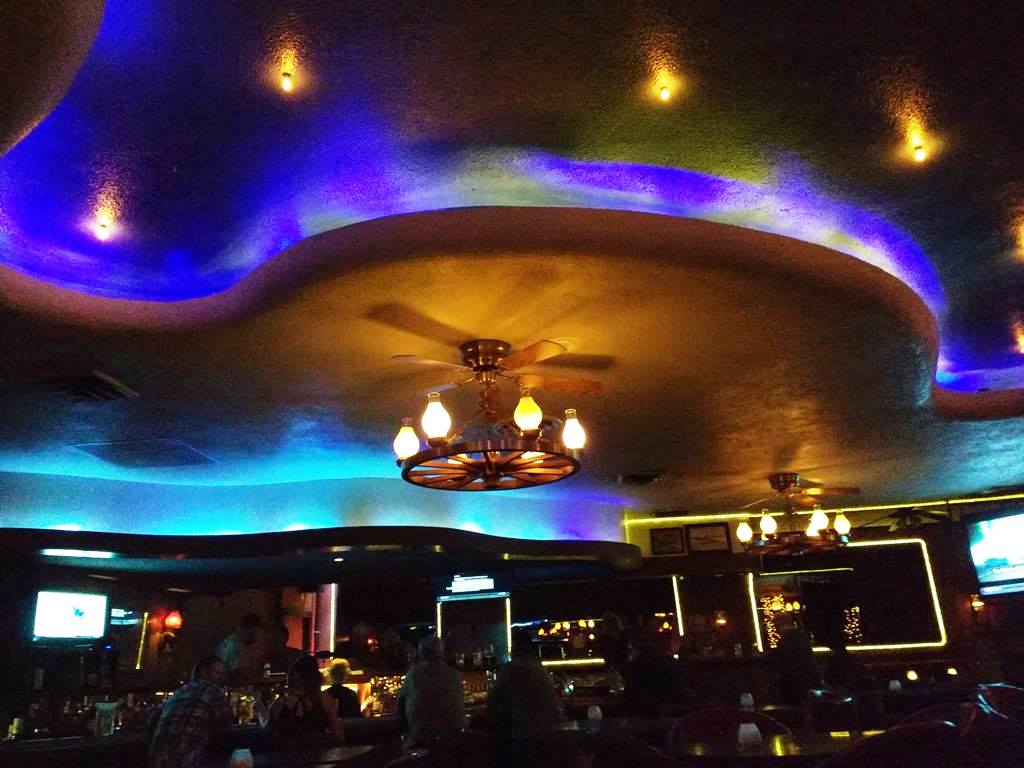 view of bar (foreground) and lounge from dining room – photo by Dean Curtis, 2016

The menu‘s focus is on steaks, of course, with several offered including a 22 oz. Porterhouse, top sirloin, NY strip (2 sizes), filet mignon (2 sizes), and ribeye (regular cut and a 20 oz. bone-in cut), as well as prime rib Thursday-Saturday. My choice was the Porterhouse. It was very good and cooked just right. Other entrees include rack of lamb, a stuffed pork chop (a hand cut, bone-in loin chop stuffed with apple stuffing, which is one of their specialties), beef liver, and several chicken & seafood dishes. Their lobster mac ‘n cheese is famous. Dinners are a good deal as they come with soup or salad, choice of potato or rice, vegetable, beans, salsa, and bread. 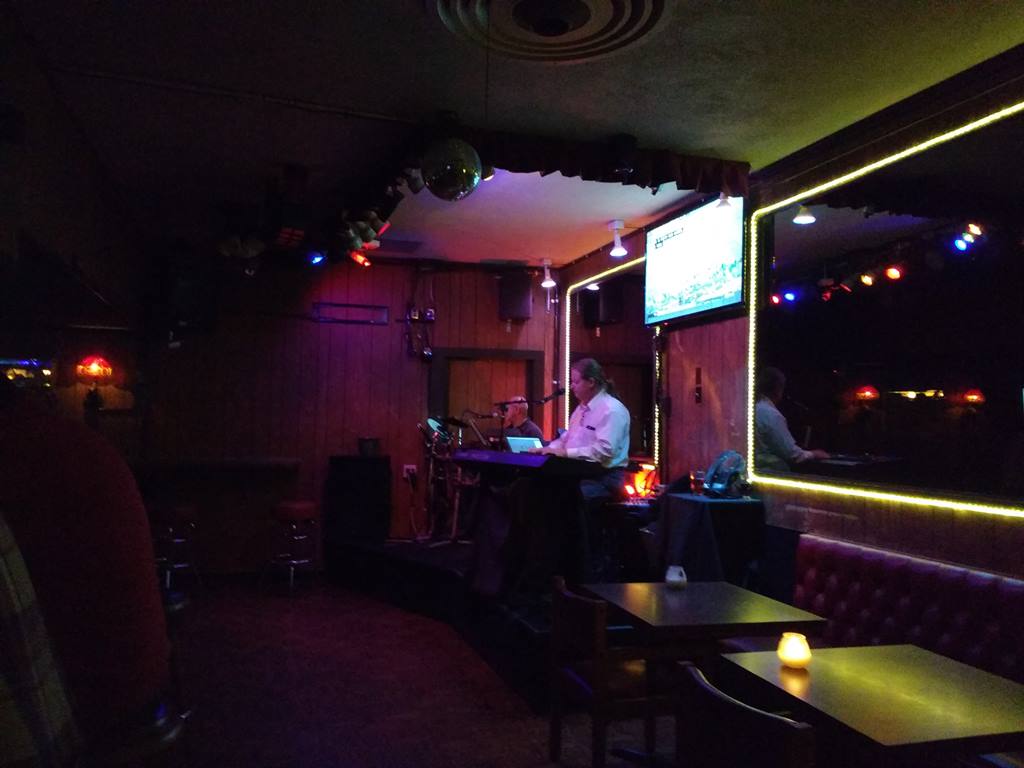 They have live music Tuesday-Saturday starting at 6:00 or 6:30, depending on the night. The music is a mix of oldies, many from the 1970s. The pianist, Jimmy Gaines, plays nightly, joined by guitarist Mike Hall and drummer Bobby O. on Fridays and Saturdays (in my photo above the drummer and guitarist are hidden behind the keyboard). They have a wooden dance floor and dancing is encouraged! We didn’t find the music too loud in the dining room to interfere with conversation.

Let’s stick with the American Basque restaurant theme after last week’s post on the Overland Hotel in Gardnerville, NV.

Bakersfield, California, is without a doubt the Basque capital of the west, if measured by the number of Basque bars and restaurants. There are three historic Basque hotels with bars and eateries in the old part of east Bakersfield by the railroad tracks (that was originally the town of Sumner, then Kern City, before becoming part of Bakersfield), plus a few Basque restaurants of more recent vintage in other parts of town. 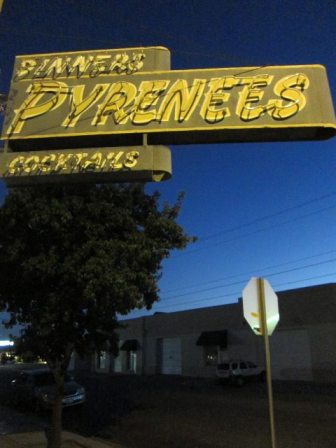 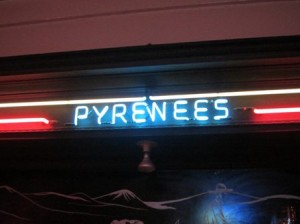 The Pyrenees Cafe opened in 1887 as a hotel, saloon, and bakery. The hotel, which reportedly once housed a brothel, is now apartments, the bakery is still open under separate ownership, while the saloon remains pretty much the same, with the original bar and stools. It is the oldest operating bar in Kern County and it’s claimed to be haunted. If you only have time for one Basque meal in Bakersfield don’t miss the Pyrenees bar for a before dinner Picon Punch. 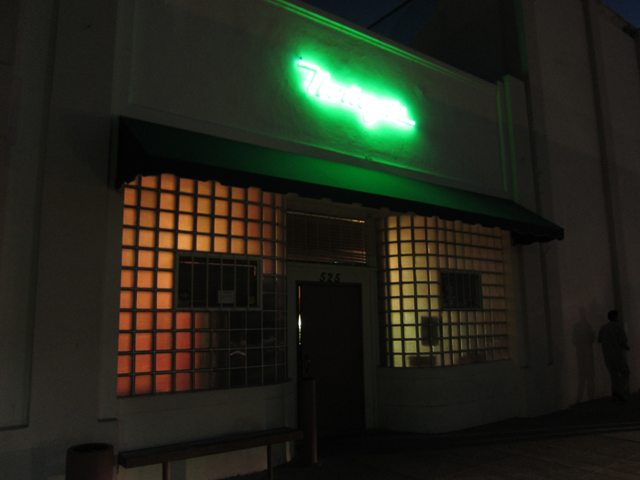 Noriega’s was opened by Faustino Noriega and Fernando Etcheverry in 1893 as a boardinghouse. It remains a boardinghouse to this day, making it the only remaining original Basque hotel still operating in the U.S.

In 1931, French Basques Juan and Gracianna Elizalde purchased Noriega’s, adding a bar and restaurant in 1940, which have not changed a bit since then (except for a small TV in the bar). 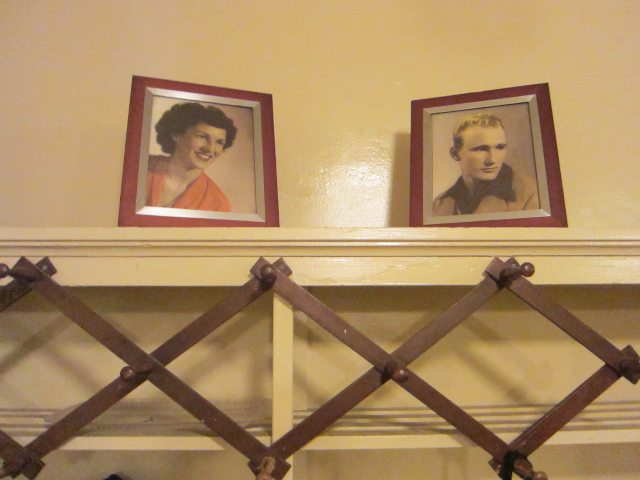 Today Noriega’s is still owned by the same family. It’s run by the Elizaldes granddaughters, Rochelle Ladd and Linda McCoy, who received the James Beard American Classic award for Noriega’s in 2011. 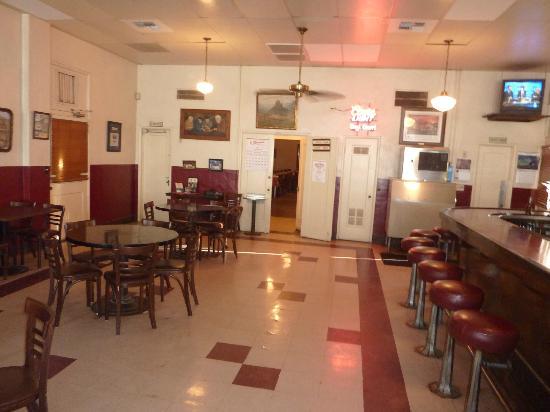 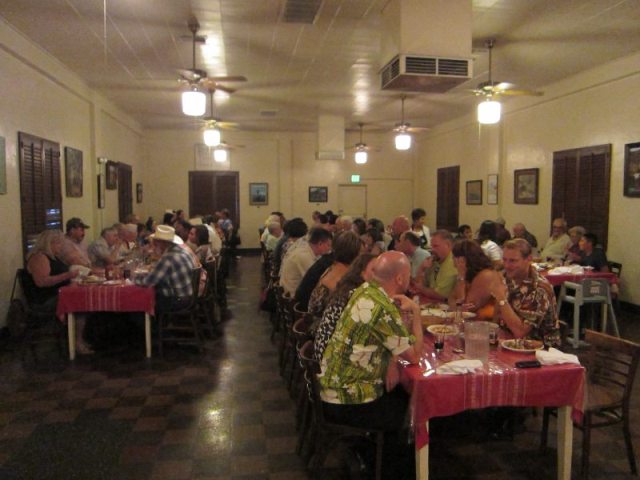 As in most classic American Basque restaurants the food is served family style on long tables. Noriega’s menu includes breakfast, lunch (single seating at 12pm), and dinner (at 7pm), all very hearty meals, with dinner being the largest. The dinner “set-up” (Basque term for the various non-main courses) is generous, including homemade soup, fresh local salad with vinaigrette dressing, their famous pickled tongue, cottage cheese with mayo, pasta or rice, hand cut french fries (usually served with the main course), vegetable, beans, salsa, bread from the Pyrenees bakery nearby, excellent homemade blue cheese, dessert, and ice cream. When I dined there we also received potato salad. House wine, served in unmarked bottles, is included, as well as coffee, tea, or milk. And all that comes with TWO entrees, which vary by the day. Clearly a bargain. The Noriega is famous for their tender oxtail stew, served on Saturdays. 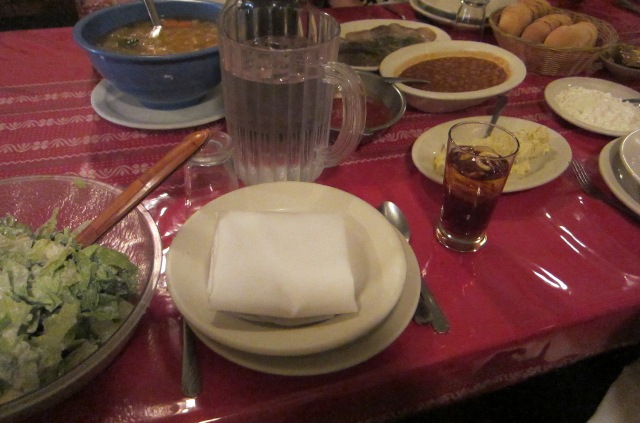 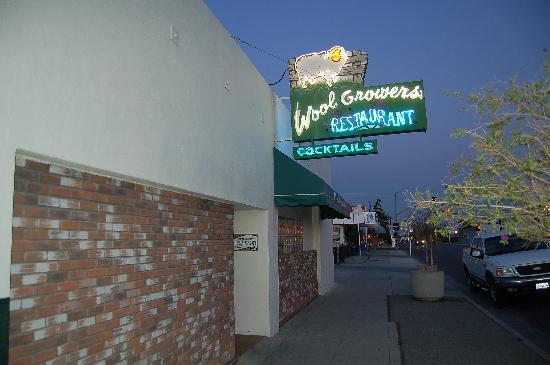 Wool Growers Restaurant was opened in 1954 by J.B. and Mayie Maitia, French Basques, to fill a need in the community for an eatery during the hours when Noriega’s wasn’t serving. It is still owned by Mayie, along with her daughter, Jenny, and granddaughter, Christiane, and this year Mayie and her family are celebrating Wool Growers’ 60 years in business! 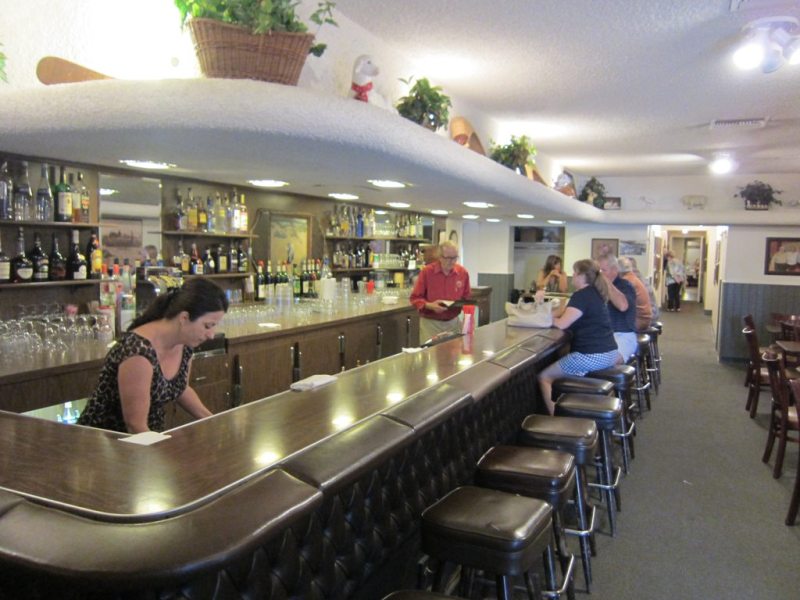 The restaurant has tables and booths for four and two, so it’s a good choice if you’re dining alone or prefer more privacy than communal dining provides. The dinner menu has several choices of hearty entrees, unlike many Basque restaurants which have a few entrees that change daily, and includes some French dishes like French Onion soup and escargots. At lunchtime they offer burgers and sandwiches in addition to a large selection of hearty meals. Saveur magazine wrote about the restaurant, praising their oxtail stew. 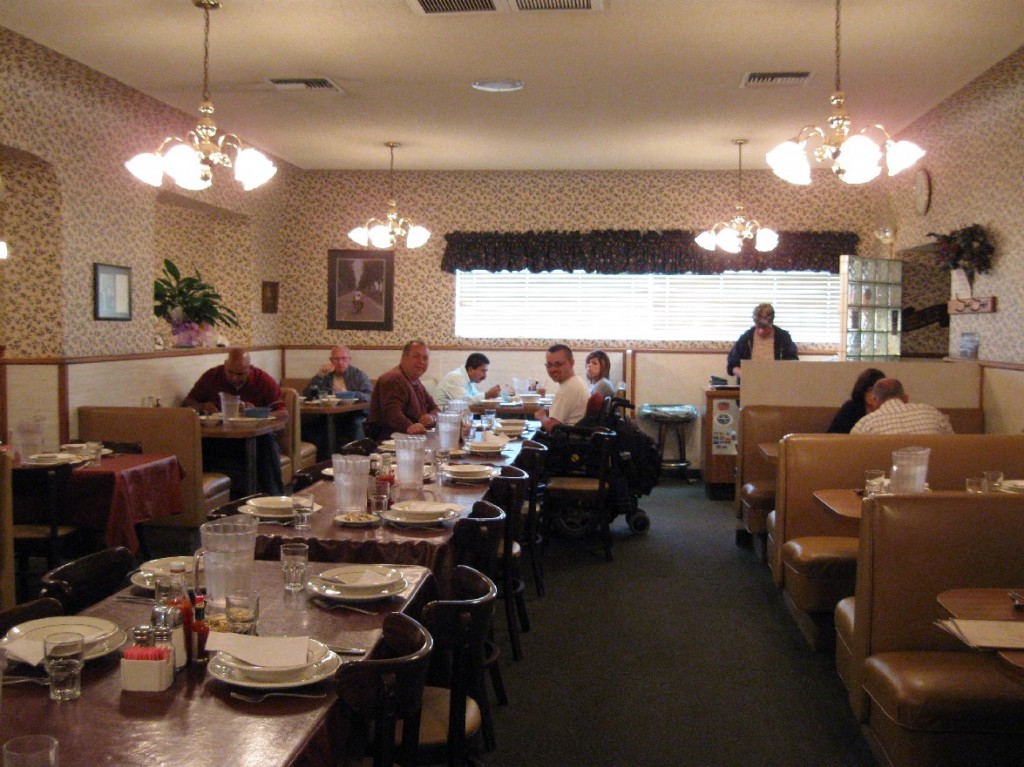 Although all three restaurants are worth visiting, If I had limited time I would try to eat at Noriega’s and have a Picon Punch in the bars at Pyrenees and Wool Growers. But why not make a weekend of it and eat at all three?