Previously on Le Continental we posted about Original Joe’s in San Francisco and San Jose. Today we travel to the north bay to one of my favorite restaurants in California, Marin Joe’s. I love the building, I love the space, I love the food, I love the people who work there, and I love the late hours. Need I say more? Well, before you jump in your car and head over there, read on, please. 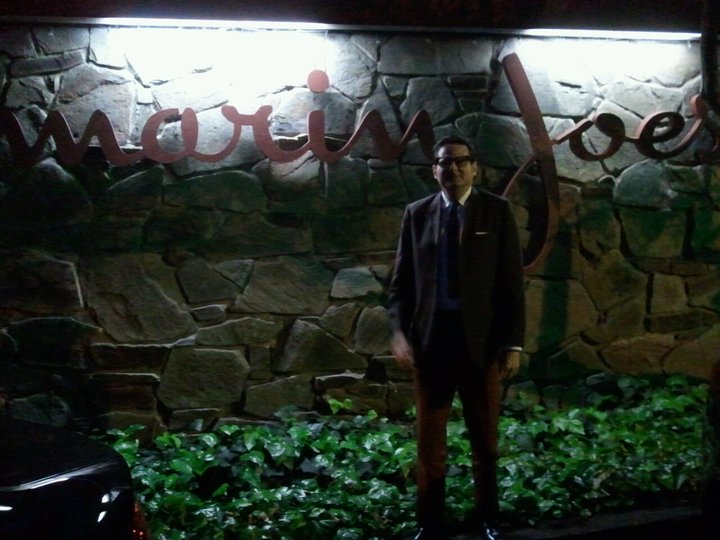 The Jab at Marin Joe’s In 1954 Marin Joe’s was opened by Adolph Della Santina, who was a partner in Original Joe’s II in the Marina District of San Francisco from 1939 to 1953 (it closed a long time ago). To design the restaurant Adolph hired noted bay area architect Mario Gaidano, who also designed many San Francisco landmarks, including the Fairmont Hotel tower (1961, still standing), the House of Prime Rib (1949, still open), the original Mel’s Drive-In (1947-1973, in the movie American Graffiti – it was demolished after the filming), and Fior d’Italia restaurant’s fifth location at Union and Stockton Streets (1953, damaged by fire in 2005, now Original Joe’s). For Marin Joe’s Mario built a modern single-story building with a long peaked roof, wood siding on the left front, large plate glass windows in the restaurant section in the middle, and stone facing in front of the bar with a sign reading “marin Joes” in a jaunty cursive style. Very modern, so just right for U.S. highway 101 in Marin County, which was a hot spot in the mid-20th century for modern architecture. In the 1950s the restaurant was right on four-lane highway 101, so it looked like a classic road house (later the highway was widened and now the restaurant is on a frontage road). 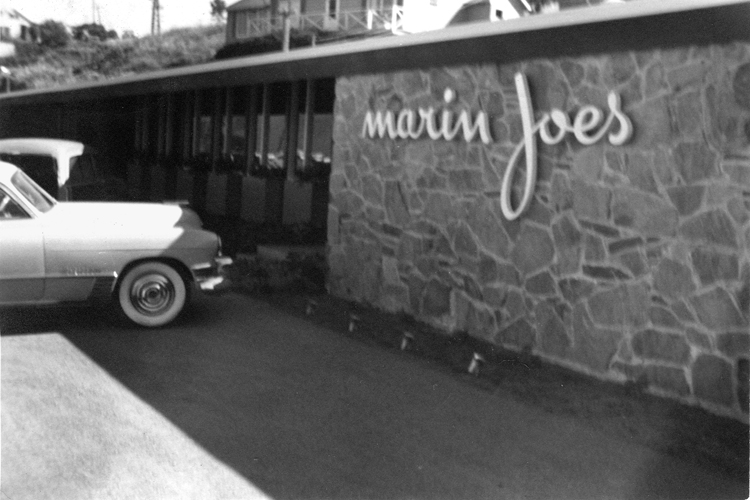 Adolph’s nephew, Romano Della Santina, from Lucca, Italy, was a waiter at the Original Joe’s II in the Marina of San Francisco. He went with Adolph in 1954 to Marin Joe’s, first working as a waiter, then as an owner the following year. Romano’s oldest son Paul became a partner in 1984. In 1997 Romano’s other son Ralph joined the restaurant. 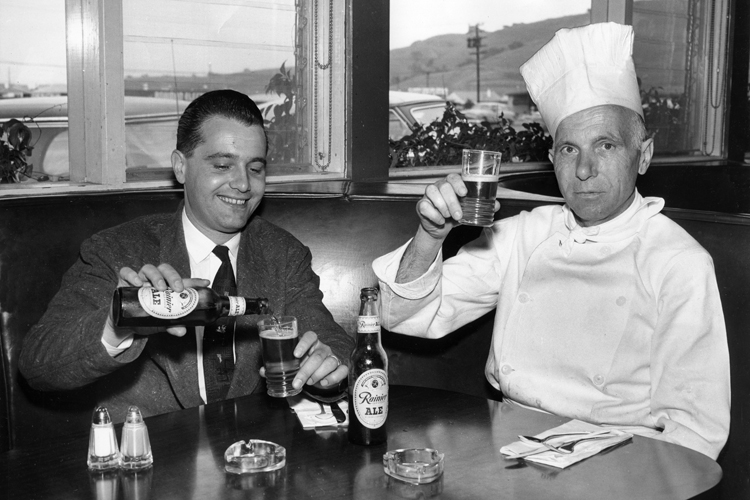 Marin Joe’s is still owned by Paul and Ralph Della Santina. Romano Della Santina, who was bestowed with the highest honor of ‘Cavaliere’ by the Italian Government for his involvement in many Italian civic organizations, was an owner until his death in 2015. Many celebrities have dined at Marin Joe’s in the past, including John Wayne, Joe DiMaggio, and Clint Eastwood. The place is always humming, usually packed every night of the week. Some people have been regular customers since the 1950s and 1960s. 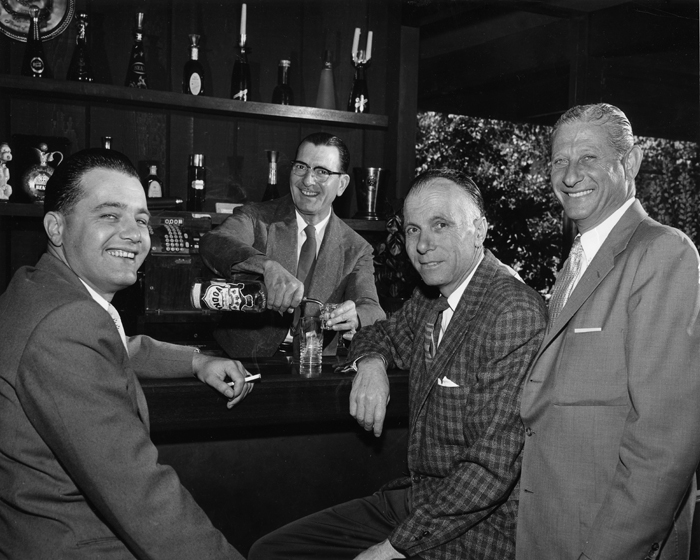 On the interior Gaidano kept the dining room open, with a cathedral open beam ceiling that extends beyond the plate-glass windows along the front of the room, as in many modern homes, to soften the gradient between the inside and outside spaces. The layout is very similar to the old Original Joe’s in San Francisco and San Jose, with three rows of naugahyde banquettes of different sizes and a long counter in front of an exhibition kitchen (a signature of all the Joe’s restaurants). In the middle of the room are posts with clusters of cylindrical lamps (original and still in use). The room is almost completely original with the exception of the heat lamps over a waiter station in the center of the counter (added some time in the 1960s I presume), small contemporary hanging lamps over the front booths, and some vases which may have been added more recently (but in brown tones that fit in with the restaurant’s overall look). It’s almost a miracle that it has been so well-preserved! There are some wonderful old photographs on the walls so make sure to check those out when you visit. 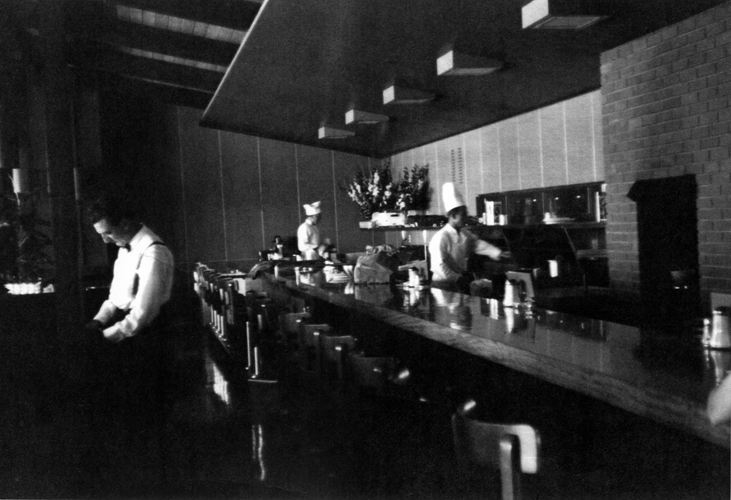 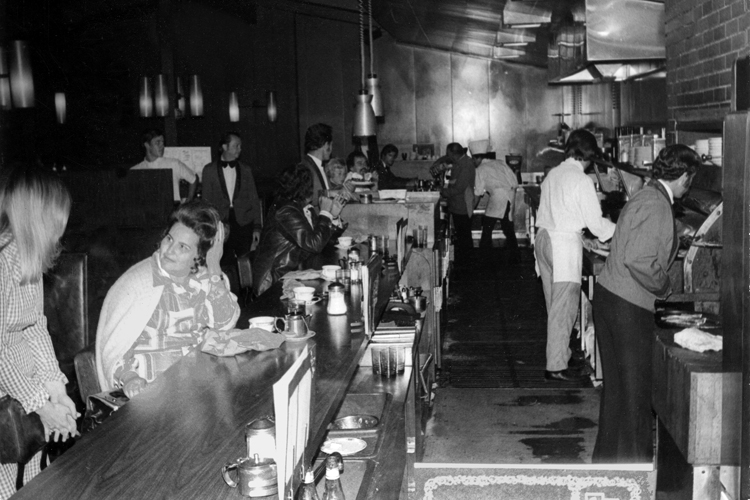 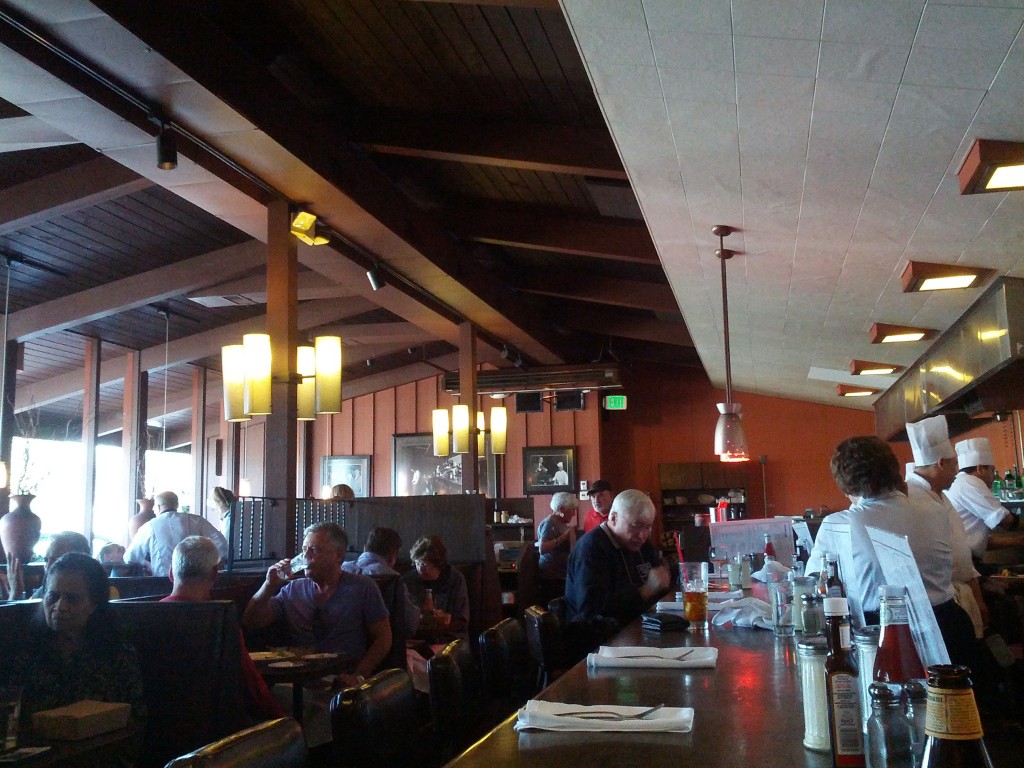 The extensive menu is pretty typical of all the Joe’s restaurants: steaks & chops, Italian dishes, seafood, and of course the Joe’s specialties: a charbroiled cheeseburger on sourdough and the Joe’s Special of hamburger, spinach, and onion (optional mushrooms). But there are many dishes unique to this location, including a spinach w/vinaigrette and cheese dish that is prepared tableside, and specials each day during lunch Monday through Friday. The sourdough bread is fresh and good. In my post on Original Joe’s I forgot to mention that sourdough bread is a signature item at all the Joe’s restaurants. 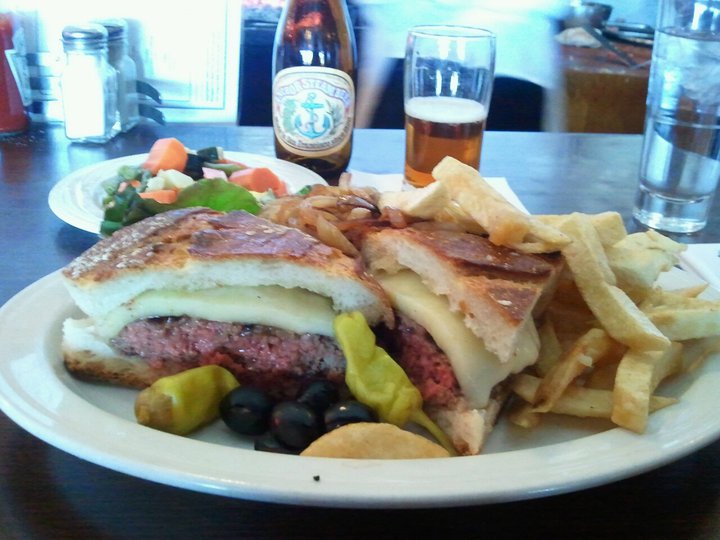 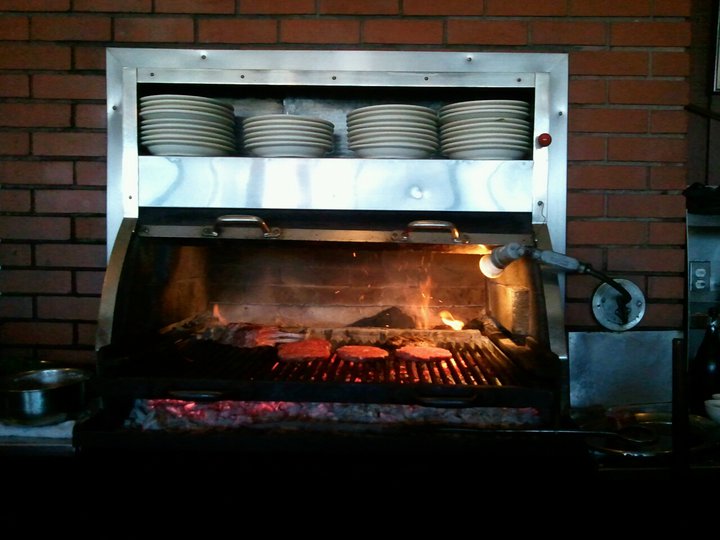 Mesquite grill in action. Photo by The Jab.

Since I work nearby I often come to Marin Joe’s for lunch, usually sitting at the counter. In the winter I like to warm up in front of the mesquite broiler (the same one from the 1950s) and watch the grill chef hand carve steaks to order and prepare the special cheeseburger, which he patties by hand after vigorously mixing the freshly ground beef with diced onions (an identical scene as in the following photo from 1972). 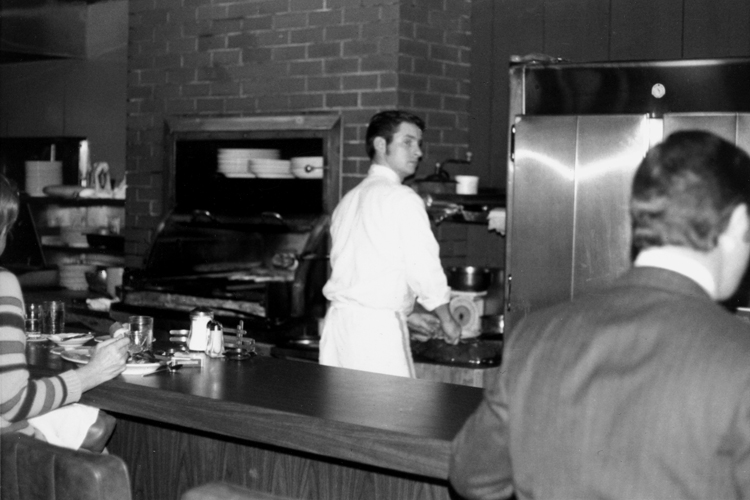 The menu is massive. It would probably take you a year to try everything on it if you went there every day! Previously I mentioned the daily specials. Here are a few of them. 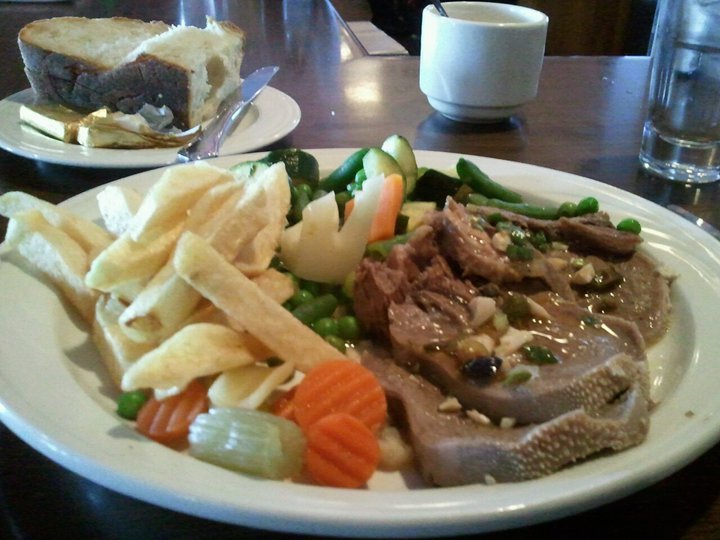 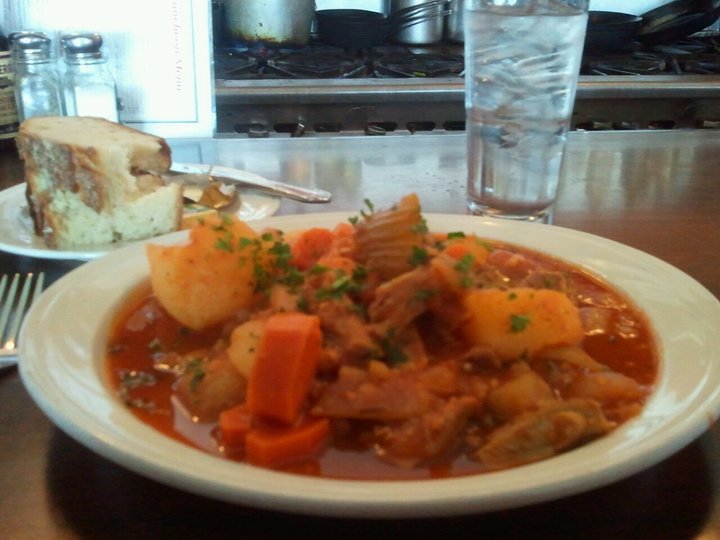 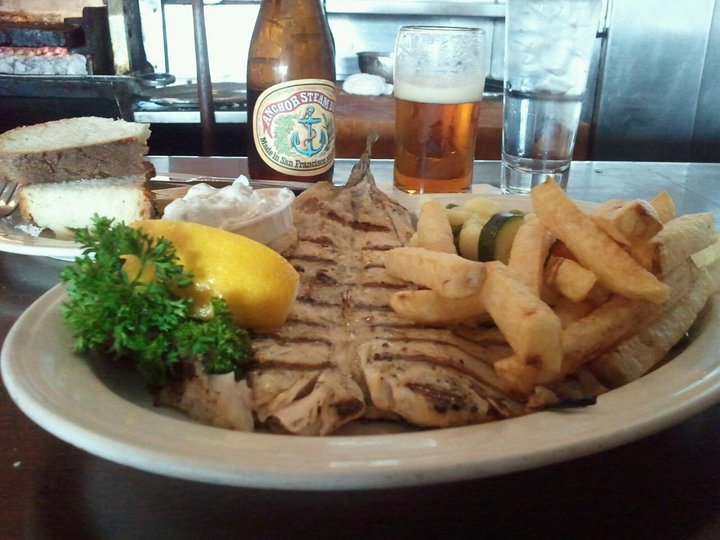 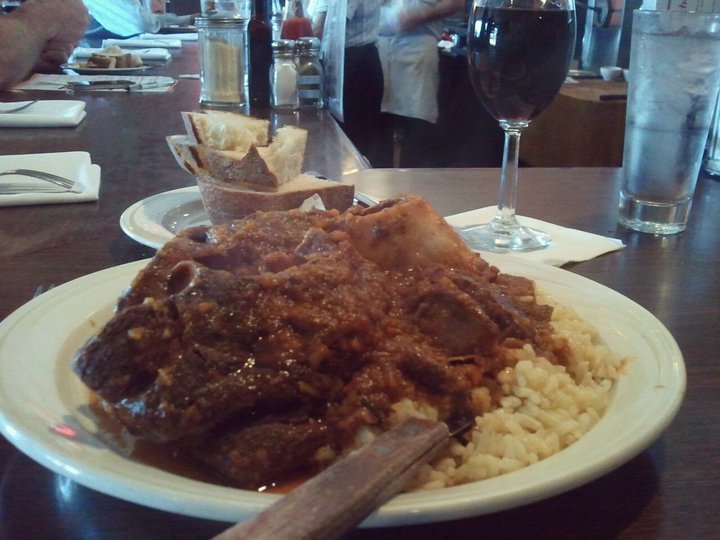 The cocktail lounge has nice original rock walls, a fireplace, an L-shaped bar, a piano, framed historic photos, and, unfortunately, a large TV. On most evenings there is a piano player and delicious complimentary cheese spread and crackers (with a jazz trio on Sundays). The bartenders are all veteran pros that know their craft.

Thanks to Jason Lewis for generously allowing me to use his historic digital photos of Marin Joe’s that he obtained from the restaurant. I love seeing old photos of places like this, especially when you can see how little they have changed. Check out his website Marin Nostalgia for more historic photos of Marin.

It can be a little tricky to reach it after you drive by it on 101 and see smoke coming out of the chimney and the parking lot packed with cars. You need to exit 101 at Tamalpais Drive and take it north towards the town of Corte Madera, then turn left at the first light (Madera Blvd) and immediately turn left again on the first street (Casa Buena, the freeway frontage road that it’s on). You can leave your car at the valet stand or continue past the restaurant to a parking lot on the right on a hill above the restaurant (or park on the street just before the restaurant).